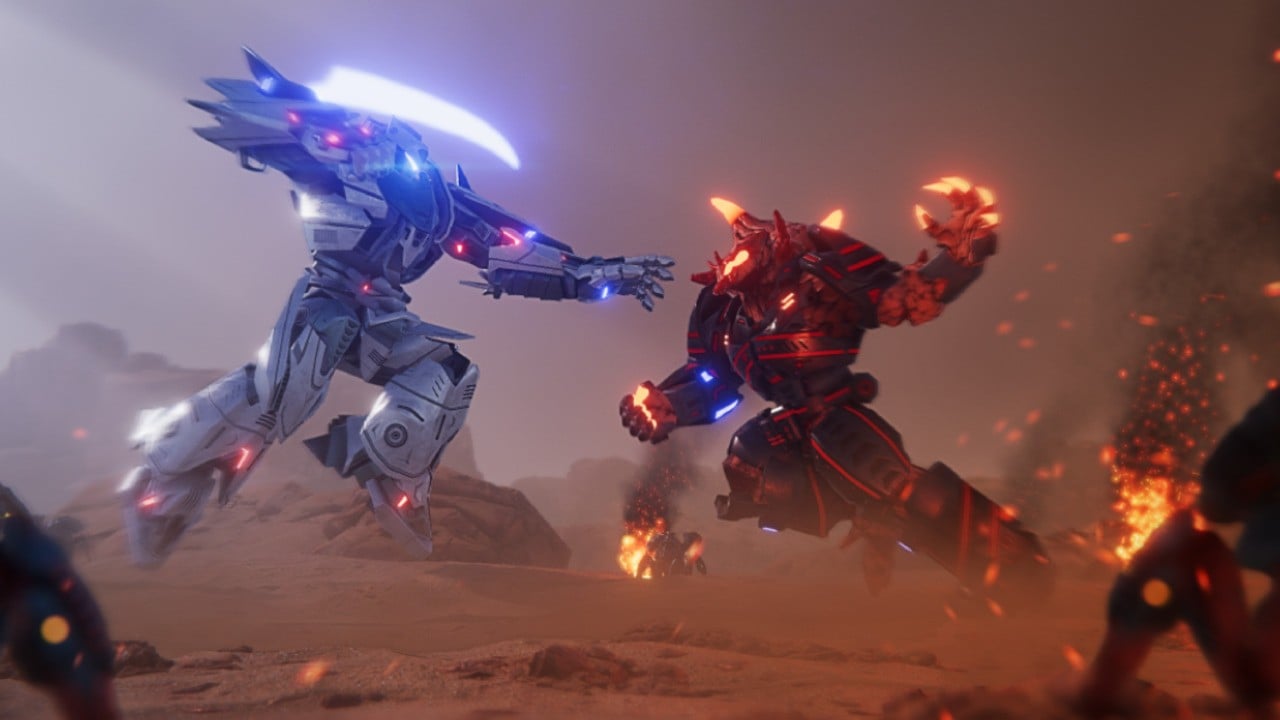 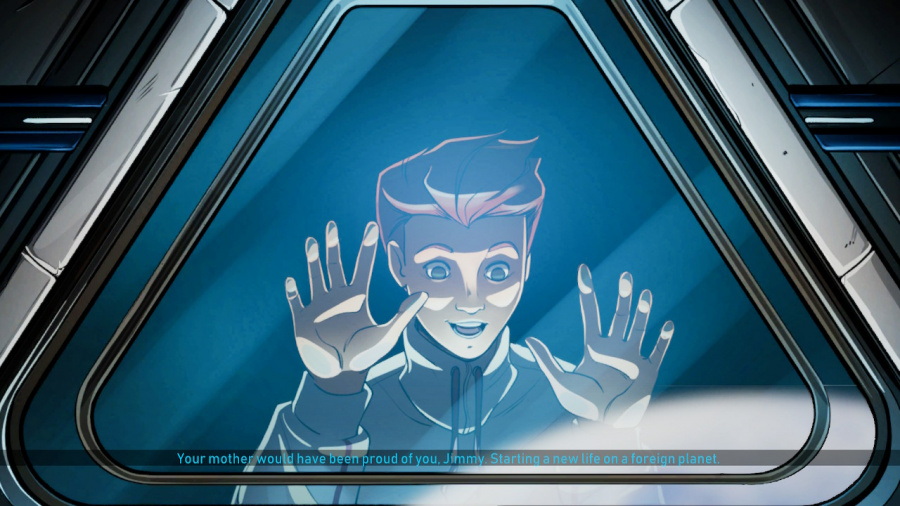 Once upon a time in an unfortunate culinary incident, this writer managed to accidentally create a bowl of literally flavorless Jell-O. The Jell-O (that’s jelly to you UK folk) was cold, completely clear, chewy, and somehow managed to leave a massive impression, solely because of how its flavor left absolutely no impression at all. It was horrible and it was fascinating.

Blackwind is the video game equivalent of that Jell-O. In many ways, it feels like a game that was AI-generated and rolled off a conveyor belt after the operators typed in “sci-fi hack ‘n’ slash” to see what would happen. Does that mean it’s bad? Probably not. Does that mean it’s good? Absolutely not.

Blackwind’s story puts you in the shoes of a whiny kid named Jimmy, who is on a weapons transport with his genius techie father bound for delivery to a distant planet. Jimmy’s father has just finished putting the final touches on a new AI-operated mech suit that will supposedly revolutionize combat, but he barely has enough time to tell you this before he is very suddenly and conveniently ‘killed’ in an attack on the ship that also sees Jimmy donning the suit. After crashing on the planet below and waking up to his new AI companion, Jimmy thus sets out to fight a lot of generic aliens and hopefully find his perhaps less-than-deceased dad. 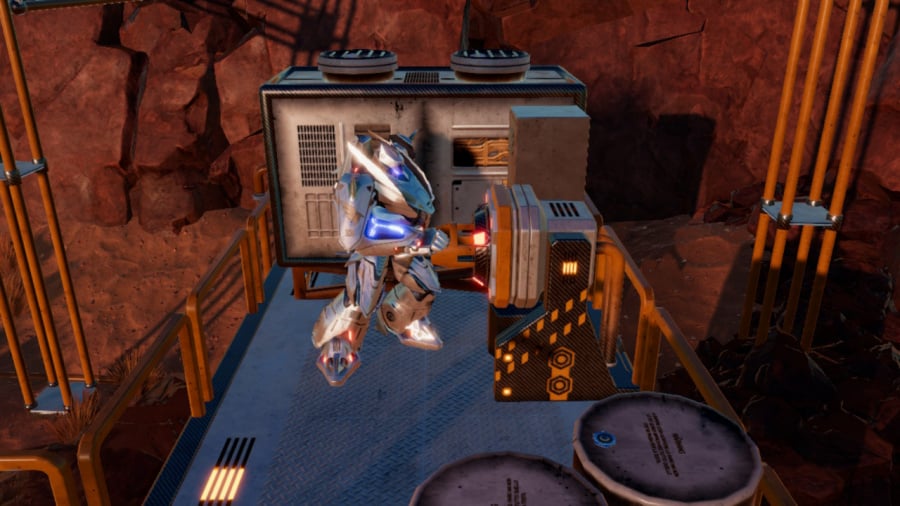 We’ll be upfront here: the story’s not good. Jimmy has a personality that’s vaguely reminiscent of Sokka from Avatar: The Last Airbender, but with a tenth of the charisma and none of the likeability. He spends the bulk of his journey asking extremely obvious questions of his AI companion, who responds in the most forced ‘sophisticated’ voice imaginable. The narrative otherwise follows extremely tropey beats about greed and corruption while the plot twists are telegraphed and easily divined. All of this is supported by some of the worst voice acting we’ve heard in a modern game, calling to mind the quaint, goofy performances that were all the rage in the mid ’90s.

Gameplay takes the shape of a typical hack ‘n’ slash platformer, with the camera usually giving you a top-down view of the action. Jimmy explores a series of semi-linear levels that you can fast travel between, and these are all filled with a litany of combat encounters, puzzling sections, and platforming. Sounds great, right? Well… it’s not.

Combat is about as mindless and copy/paste as possible, with you combining a series of light and heavy attacks to cut foes up close and deploying ranged abilities like missiles or laser blasts from afar. It sounds good in concept, but the execution leaves much to be desired. Most enemies put up pathetic resistance and easily melt before your clearly superior tech, but every now and then there’ll either be a suddenly very powerful enemy who kills you in a few hits or your mech will get hung up on some level geometry while Jimmy suffers a death by a thousand cuts. The controls consistently feel janky and unresponsive, and there isn’t much feedback to the action. 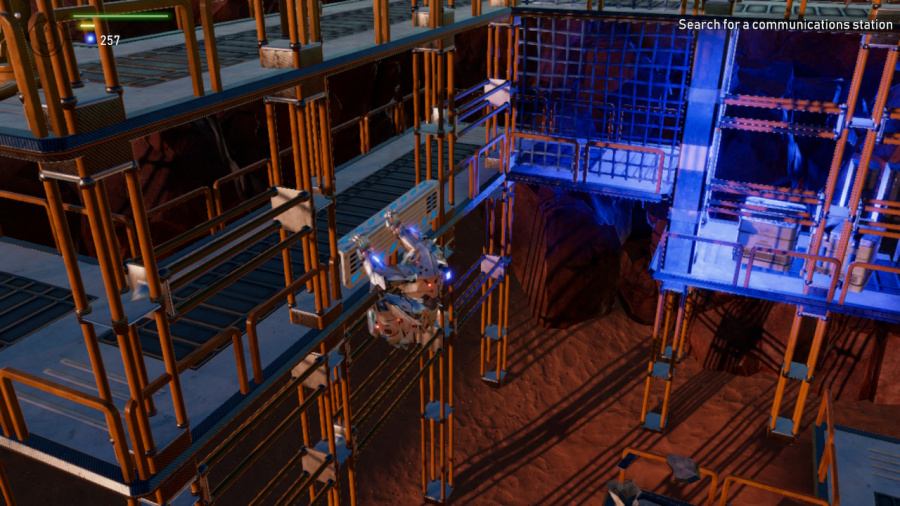 You’re piloting what appears to be a very heavy mech, yet there’s ironically no substantial weight to any of the blows you deliver. Worse yet, all this is happening as Jimmy is repeating the same cringey five or six lines as he fights. For example, we had one instance where we were forced to endure hearing Jimmy croon “Who’s the best?” four (!!!) times in a row, as we watched him play out the same basic execution move over and over.

Combat is simple and unsatisfying, then, but things are made even worse by the camera. The right stick controls where Jimmy aims his arm cannon, so the camera simply does its best to frame the action well, whether you’re in combat or exploring a level. The problem is that it does a terrible job. We lost count of how many times several of the foes we were fighting jumped off screen, leaving us no choice but to guess where we should swing or shoot next while the enemies had no problems raining down blows from beyond the camera’s view. Then there were several times where it wasn’t clear exactly where or how far we had to jump for platforming sections, leading to several failed attempts. In a game as action-heavy as Blackwind, it’s frankly baffling that the player isn’t given any control over where to put the camera, and you’re reminded of this glaring issue on a near constant basis. 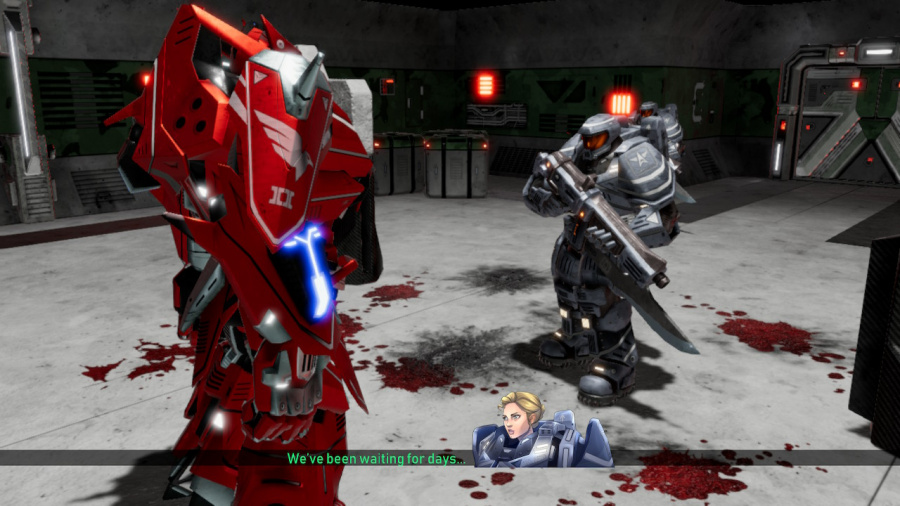 Things pick up a little bit when you’re in the more exploration focused portions of levels, especially after the introduction of a drone you can pilot to access areas the mech can’t. The puzzles are mildly satisfying, and there are some hidden collectibles to find that can upgrade your mech’s abilities. The problem here, however, is that the map system does a poor job of helping out the player. There’s a mini map for most areas you can explore, but there’s no way to expand it and take a closer look. Combine this with some surprisingly large and labyrinthine levels, and it can be infuriating to realize you missed an essential key or button somewhere and don’t have a meaningful way of figuring out where it could be.

Destroying environmental items in levels and killing enemies rewards Jimmy with blue orbs, which can then be spent at save points dotted throughout each of the levels. These then open up a series of skill trees where you can bolster things like damage output and unlock new moves. The skill trees are fine, but they’re simple in their design and don’t leave a ton of room for experimentation. Plus, some of the descriptions are rather vaguely phrased. For instance, one of the upgrades states that “Dashing is increased by 10%”. What about it is increased? The distance of the dash? The speed? The i-frames? Who knows?

As for presentation, Blackwind unsurprisingly isn’t much to look at, but that doesn’t mean it looks awful. Fighting through and exploring generic environments (forests, mountains, laboratories, etc.) hardly inspires a sense of awe, and it doesn’t take long for one to recognize the repeating assets used in a given area. Meanwhile, performance at least manages to consistently hold to what seems to be 30FPS, which spares Blackwind from feeling too janky in the more intense sections. 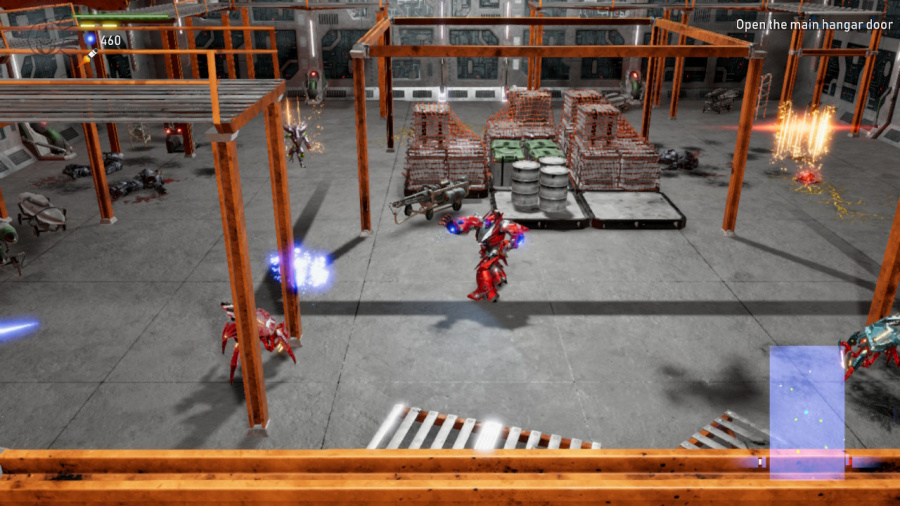 Taking all of the above into account, it seems that Blackwind’s main issue stems from the fact that it abjectly refuses to try to do anything to set itself apart from the pack. Battles are simple button mashing affairs. Platforming challenges are straightforward and easy. The story is riddled with tired tropes. There’s nothing to hold onto with this game, nothing to point to and say that is why people should play Blackwind. Sure, the combat, platforming, and story are fine, but this isn’t the kind of game that you play and feel satisfied at having done so. It’s just… there.

Blackwind is as utilitarian as a bank statement and painfully middle-of-the-road. It’s tough to recommend that you play this game because we can scarcely remember anything notable about it from our own playthrough. Yet at the same time, it doesn’t actually do anything egregiously wrong to make it instantly destined for the garbage bin. If you’re looking for an entirely unremarkable and unoriginal sci-fi themed hack ‘n’ slash, Blackwind certainly ticks those boxes. Unfortunately, if you’re looking for a meaningful way to spend your limited time and hard-earned money, this ain’t it. We won’t go so far as to say that you should definitely give Blackwind a pass, but we’d understand entirely if you did.