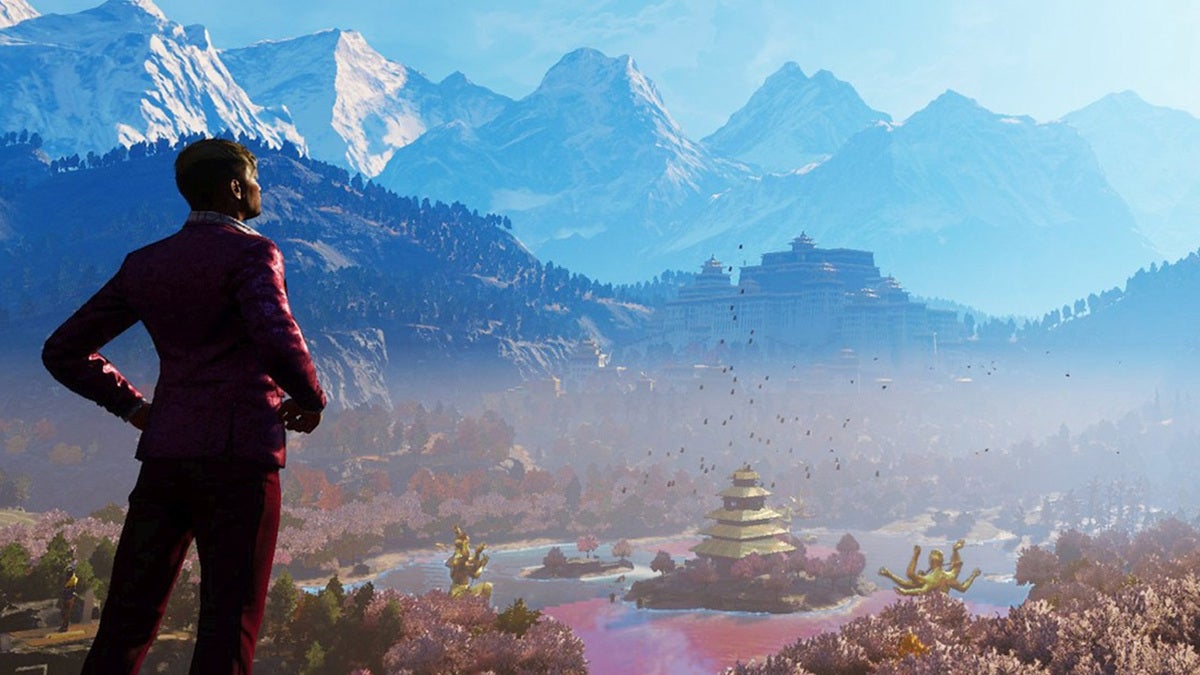 I never really considered Far Cry a series that was ripe for the roguelite treatment, and Far Cry 6’s Control DLC doesn’t do much to convince me otherwise. This looping gauntlet provides an interesting exploration of one of its more complex villains, Far Cry 4’s pink-suited Pagan Min, but Control’s small-scale open world doesn’t deliver the same free-form fun as the base game (or even other expansions from Far Crys past).

The concept will be familiar to anyone who’s seen Inception, Dreamscape, or really any even mildly sci-fi-adjacent TV show or movie in recent memory – you take control of Pagan while trapped in a prison of his own mind and must complete a series of trials to help restore his “sanity” (or, perhaps more accurately, his delusional self-image). To do so, you’ll need to collect the three shards of his golden mask (yes, it’s a little on the nose, I know) from around the bizarro version of a Kyrati valley that has become his subconscious home. It’s not clear whether this is a hallucination during his death throes or just some sort of weird dream (though, if I remember correctly, canon lore is that Pagan survives at the end of Far Cry 4) but the concept feels like a natural extension of the trippy sequences that have become a series staple.

The world itself is a neon-splattered trip down memory lane for fans of Far Cry 4 – from the floating temples and massive gold statues that command the map’s yellow brick road golden pathways, to the stylized recreations of recognizable locations like Pagan’s royal palace or the dilapidated home of FC4 protagonist Ajay Ghale’s mother. While it can certainly feel like you’re seeing a lot of recycled material, the design team definitely nailed the look of this mental monument to Pagan’s hubris. That still could have devolved into an otherwise forgettable slog between combat encounters, but what truly sells the delusion is the return of voice actor Troy Baker as the starring villain and a clever, insightful script from the story team helmed by Nikki Foy.

I came away with a much more nuanced view of Pagan Min.

It’s fascinating to get a sense of how Pagan Min viewed the events of Far Cry 4, especially in contrast to all the hours I spent listening to his propaganda broadcasts in 2014. Control could have done with a more in-depth refresher on what actually happened at the end of that game, but it does a good job of delving into the importance of the family drama that preceded it and Pagan’s sense of self. It all makes for an interesting exploration of the villain’s true nature, made even more ambiguous by the ever-more-unreliable narration you get from Pagan in conversation with his inner demons (which are some of Baker’s best moments, though his delivery is consistently great throughout). There may be some aspects of his personality that are clearer than others – he’s definitely still a narcissist with a flair for the dramatic – but after the roughly five hours it took to roll credits the first time, I came away with a decidedly more nuanced view of the character that went beyond the stereotypical “charismatic psychopath” I remembered.

Outside of its story moments, however, Control stumbles a bit in Pagan’s luxurious loafers. Its take on the roguelite formula is pretty standard: you have one chance to complete all three combat trials, then survive the final challenge. If you die, you start again with nothing – though you can use currency (in this case, “Respect,”) that you acquire during runs to purchase persistent upgrades that will make you stronger and your limited arsenal more powerful on your next try. It’s an interesting use of Far Cry’s mechanics in theory, but the constraints demanded by the roguelite concept mean that this DLC leans heavily on fairly basic gunplay and little else, which isn’t necessarily Far Cry’s strongest suit.

That signature ‘Far Cry’ sense of freedom is largely missing.

That signature Far Cry sense of freedom and the ability to approach its open-world systems with a wide variety of tactics are almost entirely missing here as a result. There are only nine weapons, all of which (save for your pistol) need to be unlocked by completing challenges across the map (which I would guess is roughly a quarter the size of Far Cry 6’s Yara). Those unlocks are persistent, which is handy, but once I was able to start a run with an assault rifle, grenade launcher, or what might be Far Cry’s slowest shotgun, I was well enough equipped that I never felt compelled to unlock any others. You can still freely explore and tackle any activity in any order, including the three main objectives that unlock its final challenge, but your options while doing so ultimately feel rather limited. You can’t manipulate any wildlife, and with no vehicles to speak of you can really only choose whether to run in guns blazing or to try and keep things stealthy – and that’s only if you manage to roll one of the randomized weapon loadouts that happens to come with a silencer.

Like many roguelites, you start with a bare-bones arsenal and use currency looted from chests or defeated enemies to unlock upgrades and equipment that persist throughout each run. Some of these are really valuable, like letting you carry extra healing kits, unlocking gear like the grappling hook and wingsuit, or giving you the ability to keep some of the currency you earned on a run after you die. Others, though, seem hardly worthwhile by the time you bank enough cash to unlock them. Sure, I could spend 6,000 points to unlock ATVs near safe houses, but at this point, I’ve already discovered all the teleporters that zap me around the map. The best use of cash was always unlocking an extra power-up slot for the buffs that drop from chests and enemies around the map, but there are only 8 of those, so eventually my upgrade decisions became a lot less exciting.

What ultimately left me convinced that the roguelite format was a poor fit for Far Cry was its lack of variety. It took me four or five cycles to complete my first run, and given the repetitive nature of its open-world activities and the recycling of the few “boss” characters (on the lowest difficulty, you’ll face one of them a minimum of four times with little to no variation) that you’ll encounter throughout each run, I sadly found myself lacking any real drive to revisit much of Control.