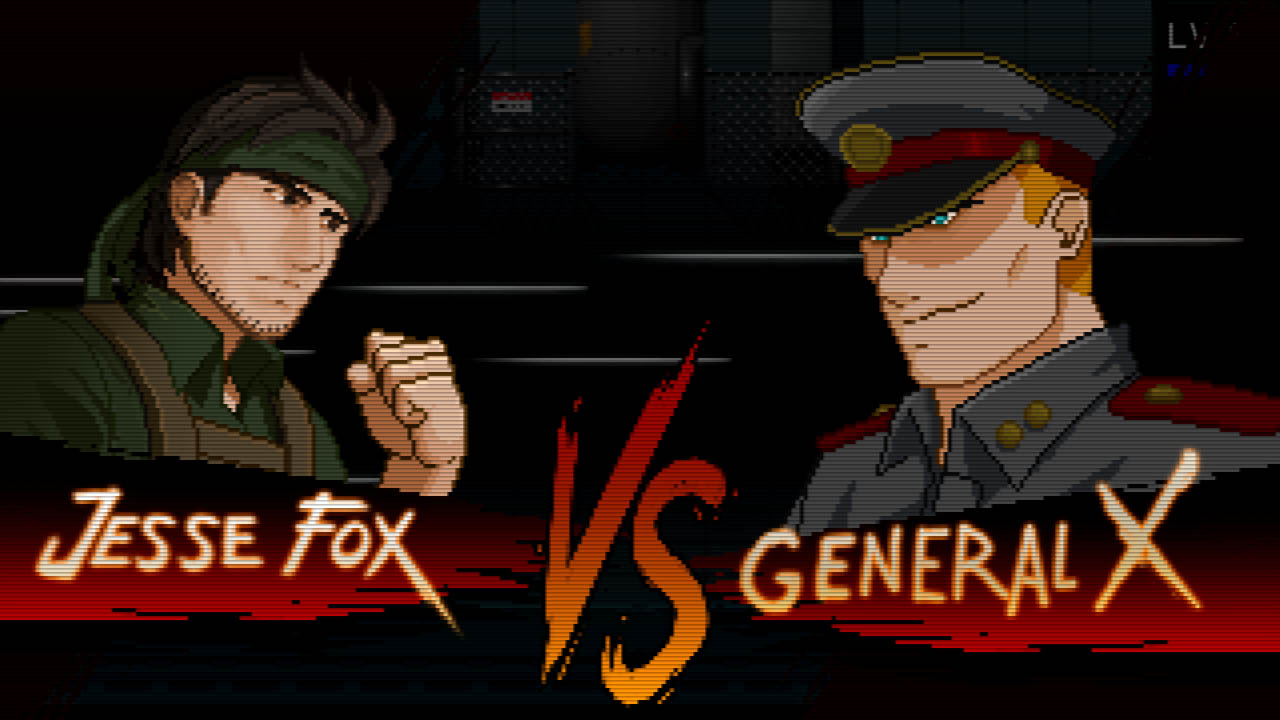 Comedy is difficult to get right in video games. Very few broadly humorous games get a universal thumbs up. But from watching trailers and playing an opening demo, we’re comfortable in saying that UnMetal nails it. It helps that it has some extremely parody-able topics in its sights, with Metal Gear Solid and 80s action movies all getting a ripping.

While we idly wait for UnMetal to land on the Xbox and PC via Steam, we caught up with the programmer and designer of UnMetal (and cult hit UnEpic), Fran Téllez de Meneses, to get more deets.

Could you please introduce yourself and your role on UnMetal?

How would you pitch UnMetal to someone who’s never heard of it?

If someone has never heard of it, then I have to fire my marketing manager! Sorry. Seriously, it’s a 2D retro Metal Gear-like game, full of humour and fresh gameplay.

It feels like there is a little bit of graphic-adventure DNA in UnMetal. You’re using and combining lots of items to solve puzzles. Would you agree, and was that an inspiration?

Just a little bit, enough to provide the player with more gameplay diversity besides the main one based on stealth and action.

Metal Gear Solid has always been a serious series with plenty to laugh at: things like hiding in boxes, guards being distracted by pretty much anything. It feels like UnMetal absolutely knows that and goes for it. Was that the starting pitch for UnMetal?

I never played the Metal Gear Solid saga (just a few hours of Metal Gear Solid 2: Sons of Liberty 20 years ago at a friend’s). I only played the first, original MSX games, which had no humour at all. So, all the humour in UnMetal comes straight from clichés of movies from the 80’s and, more importantly, from how I am.

When I created UnEpic, I was not thinking of selling it. I just unleashed my kind of humour and it worked. With UnMetal I did the same exact thing: I just relaxed, left the seriousness of a business behind, and wrote the scripts using the humour I like.

Are there any other games that have inspired, or been ripped apart by, UnMetal?

I have been inspired by the classical ‘Alchemist’ mobile game where you have to put two items together to obtain a new one. Besides, I also found inspiration from classic fighting games where you see the intro-screen before a fight, where the player can read “Jesse Fox vs. Boss”.

I have copied all levels, enemies and some bosses from a MSX game called ’Prisoner of War (2017)’, but since I designed that game too, we could call it an “improved porting to modern platforms”.

UnMetal’s demo is narrated by Jesse Fox in a flashback as he’s interrogated by his captors. Does UnMetal keep that structure all the way through?

It does. UnMetal is the story of how Jesse Fox managed to escape from a clandestine military base. But, there is something important about the way the narration is done that is introduced in Chapter 2. I’d like to tell you about it, but that would be spoiling.

We loved how Jesse Fox seems to exaggerate what happened to him in the past. Or did all those things really happen to him?

Yeah, I love it too. I took ideas for those exaggerations from action hero movies. Concerning whether everything is true or not… this is all revealed in the ending of the game.

The voice-acting is superb. The actors absolutely nail the tone of UnMetal. How did you get that performance from them?

Thanks! Well, I did a casting from over 100 voice actors. I sent a full description of each character and some lines as an example. When we had all the auditions, Jacklifear and I chose the ones that we thought fitted the roles the best.

Jesse Fox was an exception. I gave the character straight to Andrew Miller. Before UnMetal he voiced “Jacker”, a character from my previous game Ghost 1.0. I saw the potential in him and imagined how his voice could be Jesse Fox. Besides, his flexibility and disposal were excellent.

What did you learn by releasing UnMetal as a demo and how does the future look for both Jesse and the game?

Releasing a demo is great if you’re 100% sure that your game is going to be liked. That gives the player the knowledge of how the game is in truth, so they won’t find something else or be disappointed when they spend the money on it.

It also gives the chance to get the player’s opinions, and use them to improve the game itself.

Everything looks very promising. Both players and professionals are loving the game so far, so I expect that it’s going to be a small success.

Can everything be solved by punching it? Generally, and in UnMetal. 😉

Are you asking me if violence is necessary? Well, it depends. It depends on the asshole whose face you have to break!

Although in UnMetal you can even get achievements for destroying stuff by punching them instead of using more effective weapons, there are other parts where you leave your fists behind and you use tools to find the correct way: create or disable bombs, pass safely though mined fields and create chemical compounds. No punches, just intelligence and instincts.

There is even combat based only on dialogue, where you have to choose what to say to your opponent.

And finally… can you please tell us where Jesse Fox got the noose in the opening escape sequence?

Of course! Just select one of these 3 options and I will tell you:

UnMetal doesn’t currently have a release date for the Xbox, but we expect it to land any time soon. When it does, you can be sure it will get TheXboxHub verdict.

Many thanks to Fran Téllez de Meneses for giving us his time for an interview.

Yuji Naka says that he’s currently in the process of developing his own mobile game
Murder Diaries Review
Nvidia’s DLAA Could Be a Huge Step Forward for Anti-Aliasing
Announcing Voice of Cards: The Isle Dragon Roars
Sony Has an ‘Interesting, Exciting, Fantastic’ List of Ideas for Future PS5 Updates