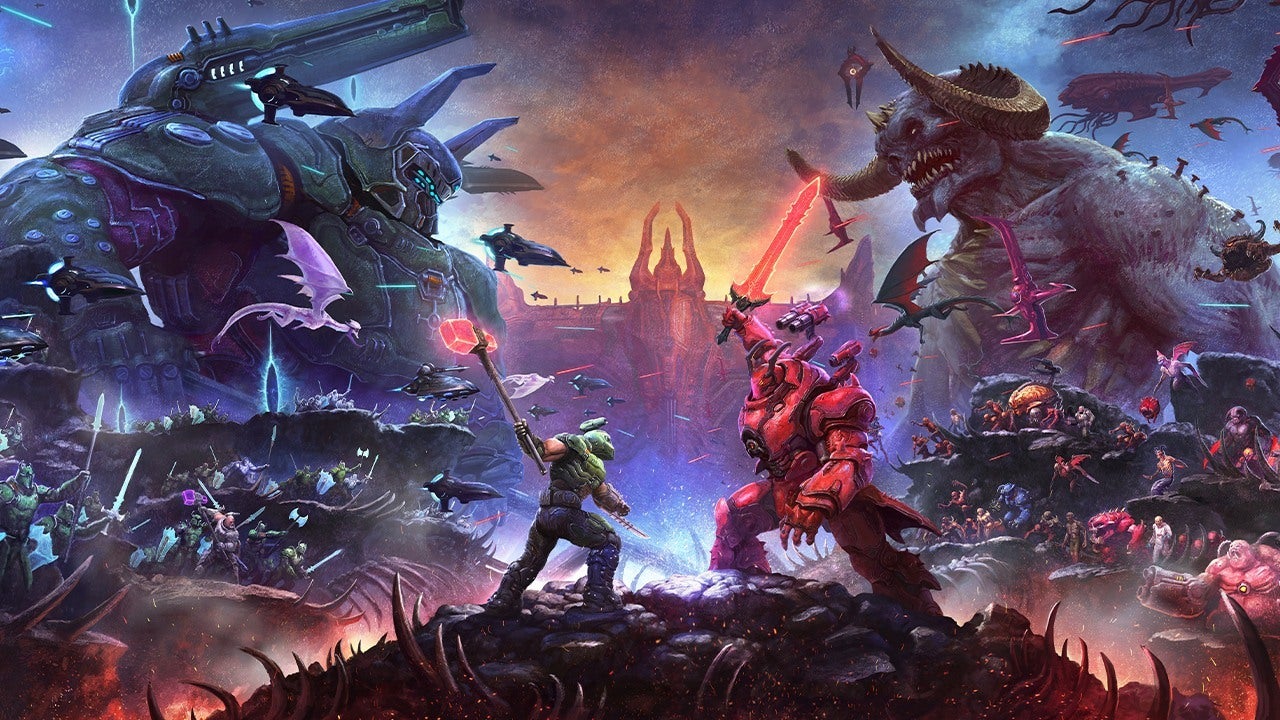 Xbox One
Share on Facebook
Share on Twitter
Share on Pinterest
Share on LinkedIn
In hindsight, Doom (2016) was for tourists. By the time you complete Doom Eternal’s second and final campaign expansion, The Ancient Gods Part 2, you’ll have the skills of, well, an ancient god, and the stuff that this franchise’s brilliantly modern reinvention threw at you five years ago will seem like child’s play. Doom has practically evolved into a single-player esport at this point, and The Ancient Gods Part 2 closes the book on the Doomslayer’s quest to vanquish Hell’s forces by adding enough new variety and challenge to keep it as engaging as ever.The Ancient Gods Part 2 wastes no time in throwing some memorable new bad guys at you. The biggest, nastiest new foe – and you’ll meet him early on – is the armored Baron of Hell, whose shell must be cracked open before you can begin dealing any damage. Doing so requires either sustained plasma-based weapon fire or a single, well-timed precision shot to the mace in his hand at the moment it flashes green. Because of that, they take a long time to bring down and must be carefully considered in big battles, which adds another layer to Doom’s ever-enlarging onion of combat strategy.Meanwhile, the plain-ol’ imp now comes in a stone variant that will slingshot into you like a demonic boulder unless you smash him quickly with the standard shotgun’s secondary riot-gun fire. But in the grand scheme of things, these guys are but a seasoning to the Hell salad you are already trying to chew and swallow.The Shriekers, however, are the trickiest of the newest additions to Doom’s menagerie. They’re exceptionally weak, but they make your task significantly harder unless you tiptoe around them. If they catch any damage (even, say, from the shockwave of a nearby Blood Punch), they scream and buff every enemy around them; meaning, as the South Park ski instructor so perfectly put it, you’re gonna have a bad time.These three new foes are tricky enough on their own, but the way The Ancient Gods Part 2 combines its evil ingredients in each encounter is an achievement in first-person shooter AI design. These are some of the most brutally difficult battles in the entire Doom series. By extension, it’s also massively rewarding once you finally earn that next checkpoint.
These are some of the most brutally difficult battles in the entire Doom series.

The Ancient Gods Part 2 is more than just a 3-4-hour draw-and-quarter session, though, because you get one useful new tool to help turn the tide back in your favor. The Sentinel Hammer is a powerup that will stun any heavy enemies nearby, and flat-out annihilate smaller ones. It plays a key role in Part 2’s climactic fights, and it’s a natural fit amongst the Doom Eternal arsenal. Speaking of which, it surprised me a little that this expansion’s final boss battle isn’t its hardest fight. Sure, the duel is tough, but if you’ve fought Marauders before (and by this point, of course, you have), then you’ll already know what to do.

The Ancient Gods Part 2’s other smart new layer is its two-tiered Escalation Encounters. Completing the first wave of these combat crunches is mandatory, and you’ll be given a permanent reward for it – such as earning an upgrade to your Sentinel Hammer. From there you can move on with the campaign, if you like, but if you go back in for the second, more difficult round, you’ll net an even bigger bounty. It’s a more organically implemented version of Eternal’s Slayer Gate challenges.

Finally, I liked how the UI has been intelligently tweaked to put small icons on your reticule to tell you how many of each powerup you have available. They’re small enough to be unobtrusive but right there in the heat of combat when you need them.

Thanks to its continued evolution of Doom Eternal’s already-brilliant formula, I enjoyed The Ancient Gods Part 2 a bit more than Part 1. While it is a bummer that you only get to ride that sweet dragon in cutscenes, the new enemies prove to be more fun to fight, the Sentinel Hammer is a blast, and the final boss fight isn’t quite as sadistic. You’ll still need mastery of every skill Doom has taught you over the past half-decade to make it through this gauntlet, and if this is the end of Eternal’s story, it’s been a hell of a ride.