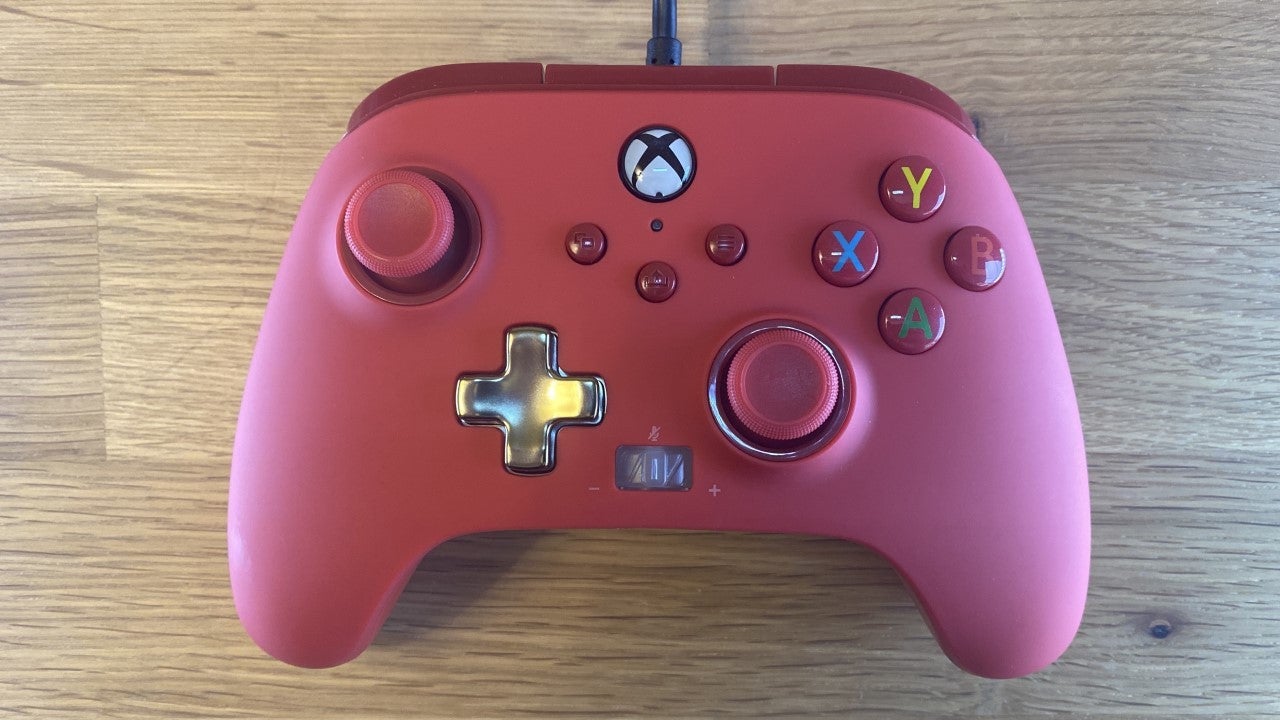 wireless controllers are the standard, there are two reasons to get a wired controller. At this point, most manufacturers spin it as a means to ensure a stable connection that minimizes input lag and lost inputs. But there’s another, more obvious reason – it’s cheaper. PowerA’s Enhanced Wired Controller for Xbox Series X/S, the next-gen version of its wired Xbox One gamepad, leans heavily on that second consideration.

At $34.99, it’s just a little over half the $59.99 of the standard Xbox Series X controller. Even if you care more about convenience than performance, and see a hardline tether as a flaw, it’s easier to accept as a concession that keeps money in your wallet. And, as it turns out, the Enhanced Wired Controller Series X is a perfectly passable controller. Though certain aspects of it look and/or feel exactly like the knockoff you’d expect, it performs well in all the ways that count, and offers a couple of useful extra features, to boot.

Aside from the MicroUSB-powered detachable cable and a few extra buttons, the PowerA Enhanced Wired Controller looks and feels very similar to the standard Series X controller. The chassis measures 6.00 x 4.13 x 2.53 inches (WDH), just a hair larger than the standard Series X controller. Weighing 208 grams, it’s deceptively light: I wouldn’t describe it as especially light in my hands, but it weighs substantially less than the Series X controller (287g). The key takeaway here is that you really don’t feel the controller in your hands at all.The Enhanced Wired Controller feels nearly identical to Xbox controllers in many key respects: The core button, trigger, and stick layouts are the same. Its face buttons have a touch more travel, but have a similar tactile press. The sticks have the same responsiveness. Since this an Xbox Series X update, a small round version of the Series X/S controller’s new share button features prominently at the center of the face, just below the Xbox button.

There are a few places where you can feel the difference, though. The “grips” on the handles are purely cosmetic, etched into the plastic. Likewise, the analog sticks have textured rims, but aren’t rubberized for grip as they would be on most gear. They will not help your hands steady as you move around the gamepad, or prevent slippage when your hands get sweaty. The D-pad, a simple cross, feels a bit squishy. There’s a strong tactile bump when you press, which is good, but the directional spokes sink a bit when you make a full press.

Build quality is also a concern. The bumpers and triggers are made from a glossy hard plastic, which feel fine while you’re playing, but seem a bit flimsy. The bumpers, in particular, wiggle a bit right out of the box. I’ve only used the controller for about four days and there haven’t been any problems, but after a lifetime of using controllers I wouldn’t expect the Bumpers’ to last for many years, or endure much abuse.

Though I primarily see the Enhanced Wired Controller as a budget-friendly alternative to the standard controller, it does have a couple of useful extra features. Like the Enhanced Wired Xbox One controller, it has a pair of programmable rear buttons, angled at the base of the handles where your middle fingertips naturally rest. You can program the buttons to replicate any of the face buttons, bumpers, or triggers using the program button in the center of the controller’s back. That functionality, while limited compared to the Xbox Elite: Series 2, is standard for most third-party Xbox controllers. Though simple, it’s one of the best two-button rear input designs I’ve used: They feel more intuitive than most rear buttons and paddles, which makes it easy for anyone to pick up and use without any practice or awkward acclimation period.

New to the Series X model, the Enhanced Wired Controller now has a large, transparent headset audio control switch at the bottom of the gamepad. Hovering just over the 3.5mm headphone jack, the dial allows you to adjust a wired headset’s volume by pressing left or right, and mute its microphone by pressing it in.

In general, I have mixed feelings about the utility of putting audio inputs on controllers: On the one hand, it’s easier to make adjustments on the fly with them than with a headset’s onboard controls. On the other, the controls only work with 3.5mm wired headsets that you plug into the controller, which fewer and fewer headsets use as their preferred means of connection. The audio controls do not impact the controller negatively at all, so it isn’t as if I don’t appreciate their presence, but their value is actually more niche than you might realize at a glance.

The Enhanced Wired Controller creates a reasonably comparable experience to the standard Xbox Series X controller. Aside from the wired connection, which provides the standard performance benefits and potentially inconvenient logistical limitations, there are very few times where I noticed what controller I was using. That may sound derisive, but it’s an endorsement: Since the controller costs nearly half as much as the first-party default, “comparable” is a significant achievement.

Playing long multi-hour stretches of Cyberpunk 2077, the controller felt good in-hand. The analog sticks felt snappy, so my movement and aim felt precise. Aside from the bumpers, whose wobble and hard edges are mildly unpleasant, the buttons and triggers all felt comfortable. You only use the D-pad occasionally in Cyberpunk, but I found myself pressing the directions a little longer than I would have with other controllers.

Thanks to their very prominent placement, I found myself integrating the back buttons into my play organically more often than with other controllers. They’re very easy to use and easy on the hands. They’re also easy to flick accidentally so don’t use them anything too critical. (I accidentally skipped some dialogue a few times when I had “B” mapped to the right back button).I had a similar experience with Call of Duty: Black Ops Cold War multiplayer. Responsive analog stick movement made my movement and aim feel natural. After switching from a high-end third-party controller with configuration software that lets you fine-tune your analog sticks, there were times when the certain movements, like horizontal movement on the right stick, felt sluggish: When I went back to the standard Series X controller, though, the action was very similar.

The PowerA Enhanced Wired Controller for Xbox Series X/S is available now for $34.99 though the PowerA digital store and retailers, including Amazon.

Release Knack on PC you cowards
The release date is set for wielding the Techno-Sword in the pixel world of Narita Boy
Call Of Duty: Black Ops Cold War Season 2 is now live
PlayStation State of Play on February 25th Will Showcase 10 PS4 and PS5 Games, No Hardware or Business Announcements
Mortal Shell: Enhanced Edition Releasing on PS5 and Xbox Series X in March, Free Upgrade for Existing Owners