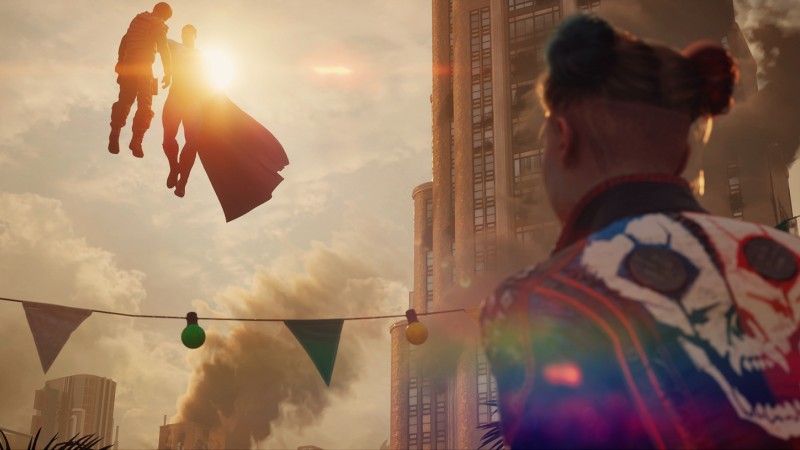 It was a big day for Suicide Squad at DC FanDome, a day-long livestream filled with reveals of upcoming games, comics, movies, and more. The Suicide Squad fun began with a behind-the-scenes look at James Gunn’s upcoming film. Later in the day we were shown the first trailer for Rocksteady Studios’ Suicide Squad: Kill the Justice League game, which is slated to release in 2022 and is a one- to four-player cooperative experience.

Yes, you read that right: We won’t be playing this game until 2022. In the trailer, Rocksteady debuted four characters: Harley Quinn, King Shark, Deadshot, and Captain Boomerang. We also hear the voice of Amanda Waller, who reminds the squad that they have to do as she says or the bombs in their heads will detonate.

The Squad is located in Metropolis, which is currently being invaded by Brainiac and his alien minions, which are quickly revealed to have purple blood as the Squad makes short work of them.

In this first look Suicide Squad: Kill the Justice League is much brighter than the Arkham games that Rocksteady made, but it’s a part of the same universe. Some of the stories that started in the Arkham games will continue in this upcoming release.

Rocksteady says that the game will be a blend of melee and gunplay. Each character will have a rich move set, which you can get a taste of in the trailer. One move is Deadshot being able to do a fuel dump from his jetpack to light enemies on fire. The entire game can be played single player, or as a four-player cooperative experience with friends. If you are playing single player, you can switch between any character at any given time, which will be controlled by A.I. when you aren’t using them. Their target? A Brainiac-powered Superman.