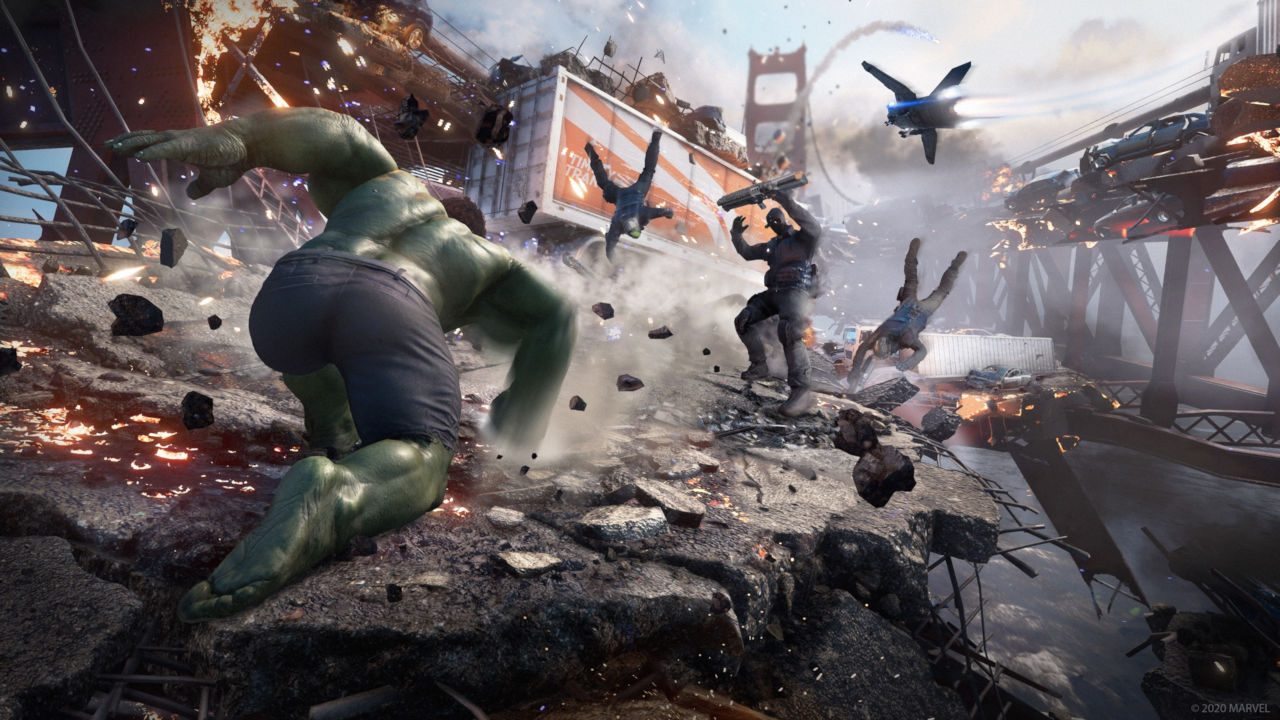 It’s nearly Beta day for those of you who have pre-ordered Marvel’s Avengers! You’ll be among the first in the world to Embrace Your Powers prior to our September 4 launch.

We built the Marvel’s Avengers Beta to give you a slice of the full game experience: single-player content from the original campaign, co-op War Zone missions, hero and world progress, and even more. For context around each of the unique missions included in the Beta, check out the PlayStation Blog’s July War Table recap.

If you’re already up-to-speed, read on for tips and tricks from some of the foremost experts at our studio, all of whom have an impressive hour-count in Marvel’s Avengers. You can also test your mastery with some unofficial challenges our team uses to take AIM out in style.

The Light that Failed (Hero Mission)

Protip: “In the Taskmaster vs Black Widow Bullfight, a single bullet landing will interrupt Taskmaster’s triple power attack sequence. This prompts him to immediately raise his shield and charge you. Dodging and repeating this tactic can shave off his health, spare some of your own, and give you the time and distance to find your bearings in this exciting encounter.”

Protip: “Hulk can smash some weakened walls with a Power Attack. What he finds stashed in this area might just give him an edge against the enemies ahead.”

Protip: “Practice your Dodges. Abomination is significantly easier to destroy if you have your dodge timings down. Make sure to practice on the tougher enemies as you make the climb up the Archive’s interior.”

Protip: “Gear up! You should get some gear with special Perks in this level. See if you can make the Perks work to your advantage against tougher enemies, like Abomination. You are granted Gamma gear that procs extra green/gamma damage on Light Combo finishers — and if you’re lucky you might get Pym gear that does the same.”

Protip: “Abomination hits hard and exudes a cloud of gamma gas that will harm Hulk when standing too close. Use Hulk’s Intrinsic ability ‘Rage’ to heal and deal damage simultaneously to counteract its effect.”

Dev Challenge: “See if you can destroy an entire wave of enemies with a perfectly located Thunder Clap.”

Protip: “This is the first time you’ll have access to the helicarrier in the Beta. Feel free to roam around and explore your new base of operations. It has definitely seen better days, but you’ll be able to upgrade it as you progress through the full game.”

Protip: “Can you find and steal a comic from one of your fellow Avengers’ collections?”

Protip: “This is the first proper War Zone mission so you may be surprised at the amount of open space there is to explore. Use Tactical Awareness to locate Points of Interest in the area, such as optional challenges and special strongboxes containing powerful new gear.”

Protip: “Heroics and Ultimates should be used – not saved! You will likely level up once during this mission, and all of your Heroics will refresh when that happens. Don’t save them up and waste the opportunity — YOLO!”

Dev Challenge: “See if you can win the Domination event beneath the satellite tower at 100% (meaning you never leave the domination circle).

Protip: Make sure to beat all three HARM training rooms! Once you do, you’ll earn a Nameplate that carries over to the full retail version of the game. Fortnite fans will also unlock the Hulk Smasher Pickaxe and bonus Hulkbuster style – more info on that collaboration here.

Protip: “Since HARM Room Challenges take place in smaller confines, take down the flying or ranged enemies first before tackling on the melee ones.”

Dev Challenge: “See if you can avoid any damage in the fight against multiple waves that ends this mission!”

Protip: “Start learning the various ways of opening locked facilities and rooms throughout this level. Sometimes, there are pressure panels to stand on, sometimes you need your ranged attacks, and sometimes a good old Hulk Smash will get you in.”

Dev Challenge: “There are a TON of flying plague drones on this level. See how many you can take out with a single throw (Hulk’s ranged attack arcs, so it’s a math problem!)”

Protip: “Use Tactical Awareness to spot extra supplies in the map. These provide additional gear to give you more options and level up more efficiently.  Not all the rewards are marked with beacons.”

Dev Challenge: “If you play solo, your companions are going to want to do the Domination fight outside of the AIM facility. Make sure you don’t forget to take on the High Value Target just a few hundred meters away before you go inside.”

Protip: “If you find yourself getting overwhelmed, remember that taking out turrets and flyers first sometimes reduces the overall, consistent damage you are taking. Clean up those minor annoyances, so that you can focus on the bigger enemies.”

Dev Challenge: “This contains the hardest Hack mission in the Beta. See if you and your team can take it on at the highest level of difficulty.”

Protip: “This large boss fight takes place in a more open environment. Use a flying character, such as Thor or Iron Man, to take advantage of this open space and easily reach the higher weak points.”

Protip: “In the first fight here, it is easy to get overwhelmed (especially if you are trying the mission before you are at the recommended Power Level). Learn to jump into and out of combat and let your fellow players (or AI companions) take some of the heat.”

Dev Challenge: “Never Touch the Ground: If you are playing as Iron Man, see if you can complete this boss fight without getting knocked out of the sky by the various missiles flying your way. It’s tough, but not impossible!”

Protip: “This is a very short mission. To get the most out of it, look for a chest with gear before you use the terminal.”

Hero progression is one of Marvel’s Avengers main systems, and the Beta gives a taste of earning experience to level up your unique Hero. You’ll have access to the starting Skill page for each hero and as you earn experience/level up, each level will grant you a Skill Point. You can then spend these to unlock Skills and shape what each of your Avengers can do.  You can reach up to a Hero Level of 15 and a Power Level of 45 in the Beta.

Protip: “Resources to boost your gear can be found in crates scattered across every mission. Be sure to regularly boost your equipment’s Power Level in the Gear menu, as the equipment you’re granted from strongboxes and mission rewards are leveled based on your current loadout.”

Protip: “The bar beneath an enemy’s HP bar is their stun meter. Once you attack an enemy enough to fill it, they will be open to a Takedown, which is a powerful attack that is unique to each Super Hero.”

Protip: “You can cancel out of attacks with jumping, dodging, or using a Heroic. This is useful for attacks that have long wind-ups like certain power attacks.”

Protip: “You don’t have to use your heroics as soon as they are available.  Instead, find a good opportunity to use them against a tough enemy or group, or when your willpower is low.  Also be aware that some enemies can drain your heroic energy even when the meter is full.”

Protip: “If you are playing War Zones solo, don’t forget to play as each of the heroes.  The AI companions will use the Skills, Gear and Outfit you selected for them.  This approach will make your Strike Team more formidable.”

Protip: “Hulk’s Stranglehold heroic can be held down, delaying the start of his charge for a few seconds. During this time he’s immune to damage, so use it to help aim the charge or tank a few attacks before he starts barreling through some AIM baddies! Hit the R1 button again to slam his fist down and pop foes up into the air for an easy grab attack.”

Protip: “Grab enemies and use them as weapons against the enemies who block your normal attacks.”

Protip: “When playing co-op as Iron Man, help the more grounded characters out by focusing primarily on the flying enemies such as drones and Sky Dogs. Defeating them, or at least pulling their aggro, prevents the heroes on the ground from getting attacked at all angles and helps keep the fight at a more even playing field.”

Protip: “As you level up make sure to try each of Iron Man’s weapon systems. Each has benefits in different situations. The active weapon type is highlighted below your energy meter.”

Protip: “Kamala’s light attacks have a wide range and can hit multiple enemies. Meanwhile, her heavy attacks can knock enemies up into the air, where you can follow up with a quick combo. Alternate between light and heavy attacks mid-combo based on what you think is best for the given situation.”

Protip: “Grapple, grapple, grapple! Black Widow’s grapple move is the quickest and most satisfying way to close gaps between a hero and enemies in the game. You can pull yourself up to flying Drones and dropkick them out of the sky, or counter a Stiletto Riot Bot from a distance before zipping across the battlefield to finish them off.”

The Beta is big, but only a sample of what’s to come. Marvel’s Avengers will feature a full-length campaign, over 80 War Zones/Drop Zones, more than 50 enemy types, regularly updated configurations of HARM rooms and challenges, and even more later game mission types. On top of that, you get six heroes with the game at launch, each with more than 50 skills to upgrade, and gear and outfits to earn and unlock. The longer you play the game, the more it grows and evolves as we add new characters like Hawkeye, and new story content and regions – all at no additional cost. We can’t wait for you to dive into the world of Marvel’s Avengers.