Thinking about making a U-boat game? Unless you’ve some quirky new angle or have a mind to model WWI U-boats my advice would be don’t. The genre is as rammed as a freshly sealed sardine can at the moment. First-time devs Iron Wolf have the right idea. Instead of following their well-reviewed co-op board game about Kriegsmarine convoy molesters with a PC take on the same subject, the Polish outfit is aiming to spellbind simmers with a game played from a convoy chaperone’s perspective. 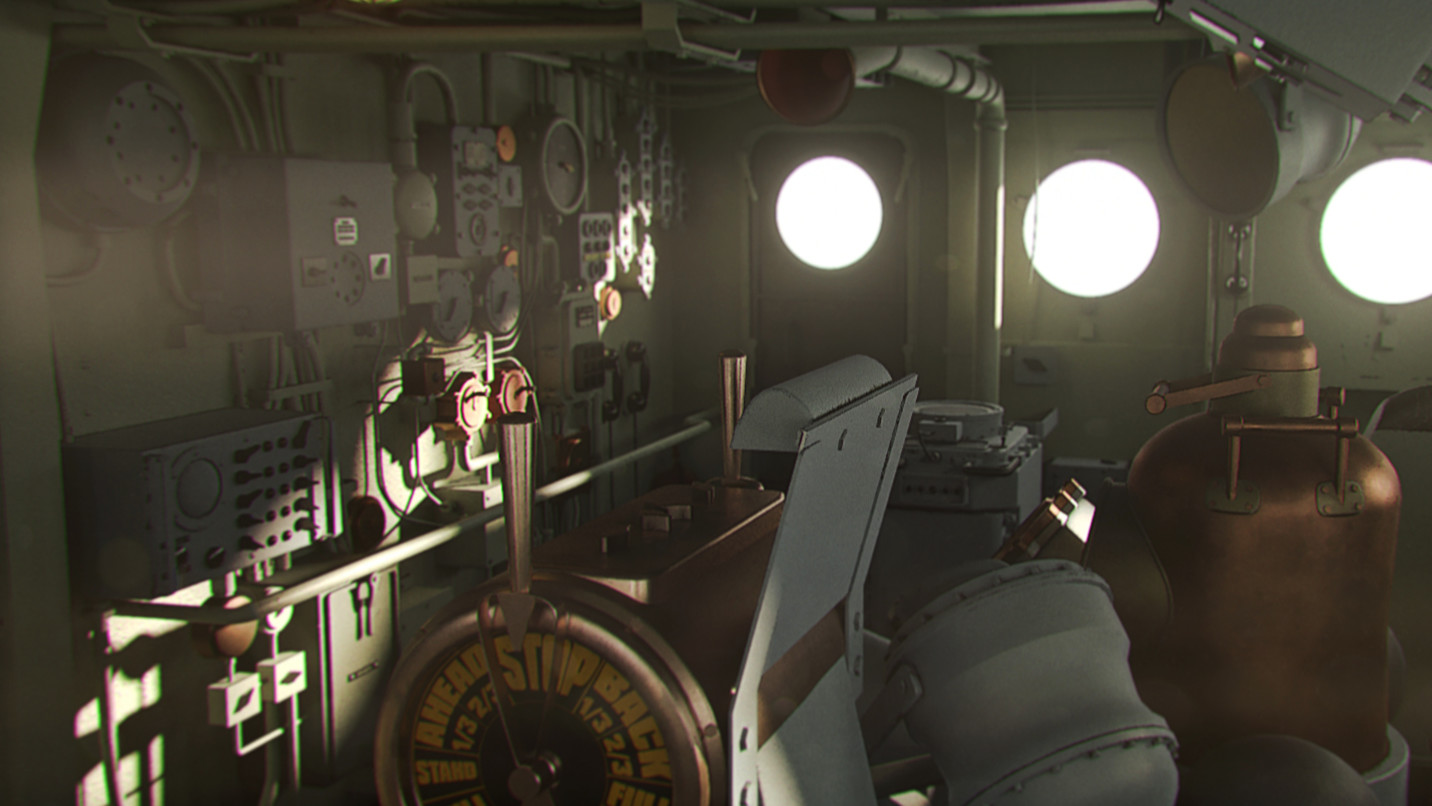 Set in the second half of 1942, a time when the Battle of the Atlantic was delicately poised, Destroyer: The U-Boat Hunter will put us on the rain-lashed bridge of USS Janson, a fictional Fletcher-class destroyer. Janson, together with three AI-controlled-but-taskable companions, has been given the job of ensuring an “important convoy” reaches Blighty with minimal losses. 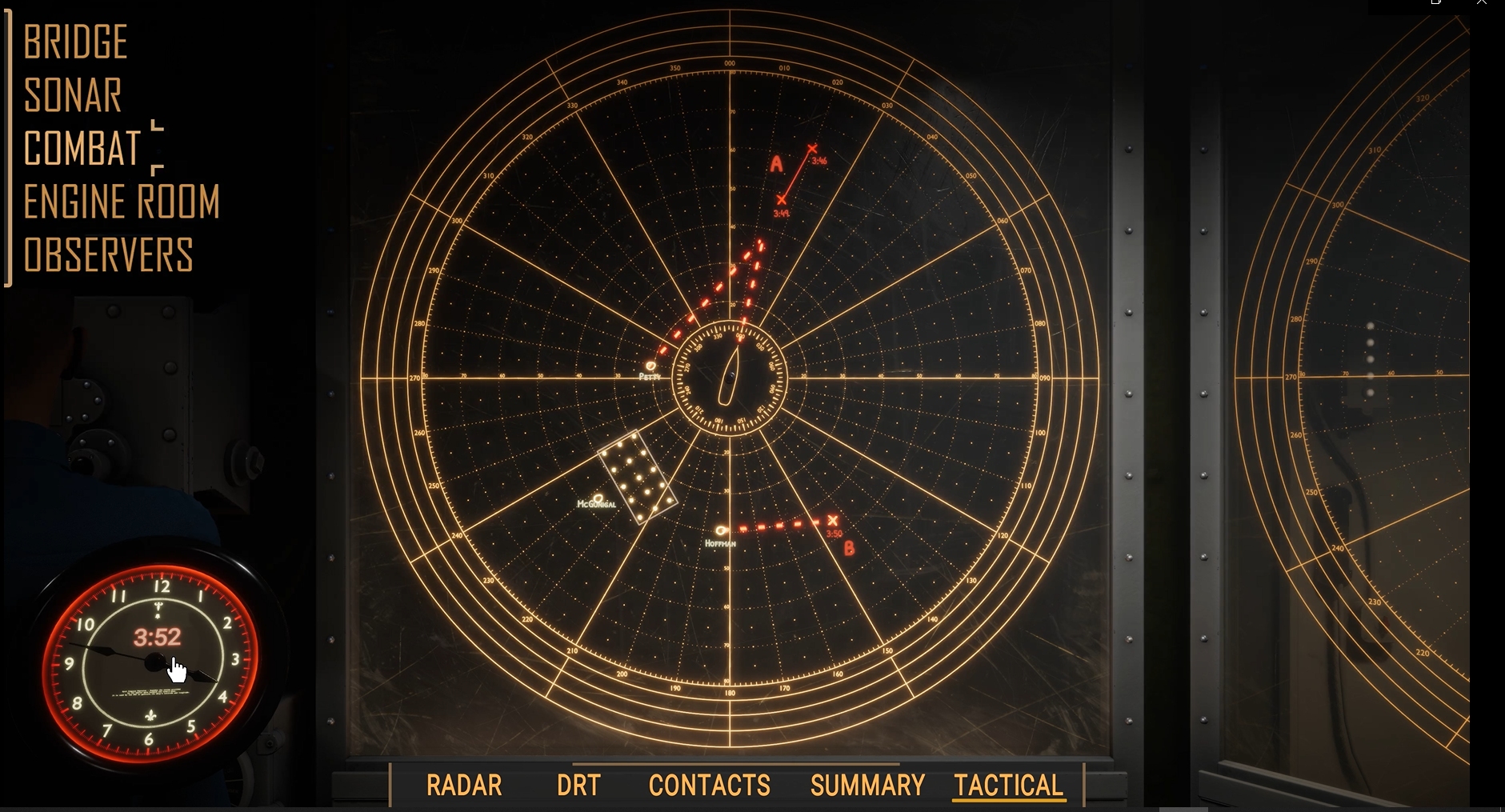 Judging by the trailer and the information released thus far, the commission won’t be an easy one. There’ll be tactical choices aplenty, and now and again, a bit of soul-searching. Do you attempt to pick up survivors from a torpedoed tanker and risk losing an escort in the process or do you press on, doing your best to tune out the forlorn cries of doomed sailors. That crippled munitions ship… do you leave it to its fate, let it fall behind but allocate it its own bodyguard, or slow the entire convoy in order to maximise its chances of survival?

HR dilemmas are also on the cards it seems…

“Our goal is to build a credible, highly authentic game environment. To that end, we are aiming at recreating naval warfare technology and US naval combat doctrine from the 1940s, as well as portraying day to day activities of the crew, their problems, and interpersonal relations. These motifs will be incorporated into the main plot, and will be based on actual stories and anecdotes by US Navy veterans.” (Bartosz Pluta, Iron Wolf CEO) 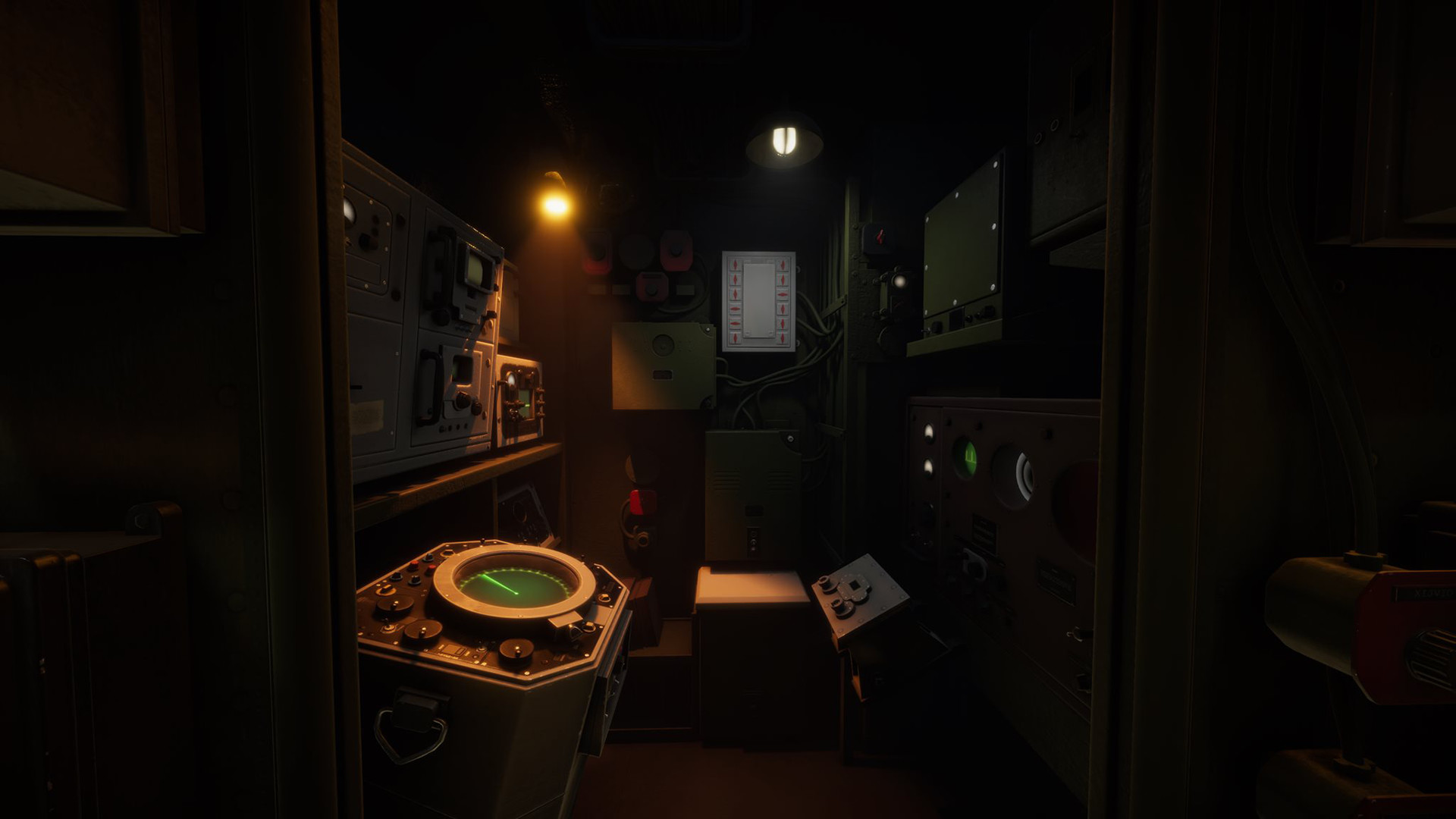 Research considerations undoubtedly played a part in Iron Wolf’s choice of a Fletcher-class lead. Four of the type (Kidd, The Sullivans, Cassin Young and Charrette) now serve as museum ships. The screenshots suggest at least one field trip has already taken place. Those interiors look great, I think you’ll agree – important because it sounds like we won’t see a great deal of Janson’s rust-streaked exterior…

“One of the main premises that we keep to in our design is something that we call ‘realistic combat awareness’. What it means is that there will be no way to see through the fog of war other than by using authentic equipment and procedures. There is no ‘bird’s eye view’, and the player will be far from omniscient. We believe this is especially important in recreating anti-submarine warfare, where advantage in combat is achieved mainly through detecting, locating, and keeping track of enemy presence.” (Artur Salwarowski, Iron Wolf vice-president) 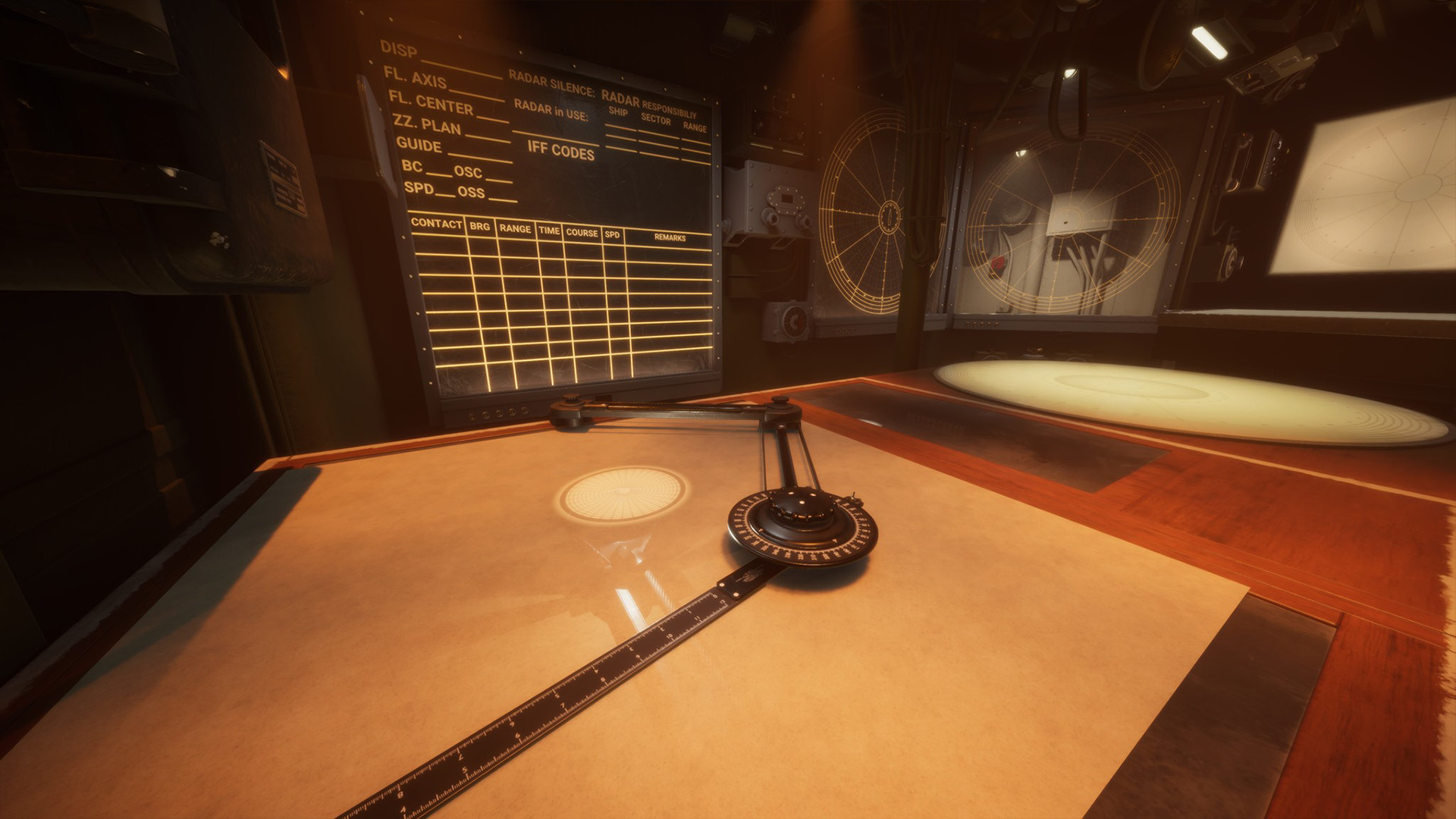 As relatively few destroyers and corvettes ever bagged a U-boat and some that did had to wait weeks… months… years even, for confirmation of their kills, the fact that few sims come at the Battle of the Atlantic from the victor’s perspective, isn’t all that surprising. By choosing to tell the story of one eventful patrol, and blend sub hunting with broader decision-making, Iron Wolf may well have found an ingenious way around the inactivity and intangibility that all makers of realistic WW2 ASW games must grapple with.

If Destroyer does prove a hit (something we won’t know until Q3 2021) then one day, courtesy of a sequel, we may well finding ourselves depth-charging I-400s and downing kamikazes. Pluta and Salwarowski are already toying with the idea of a Pacific follow-up with surface-to-air combat.

The Partisans 1941 “pre-beta” demo could learn a thing or two about freedom and spectacle from the Desperados III demo. Having sneaked, stabbed, and shot my way through the former’s gloomy Russian hamlet/railway halt, I’m persuaded Alter Games have what it takes to produce a mechanically competent Commandos-like. What I’ve yet to see evidence of are levels colourful and libertarian enough to absorb the way Pyro’s and Mimimi’s maps absorb. 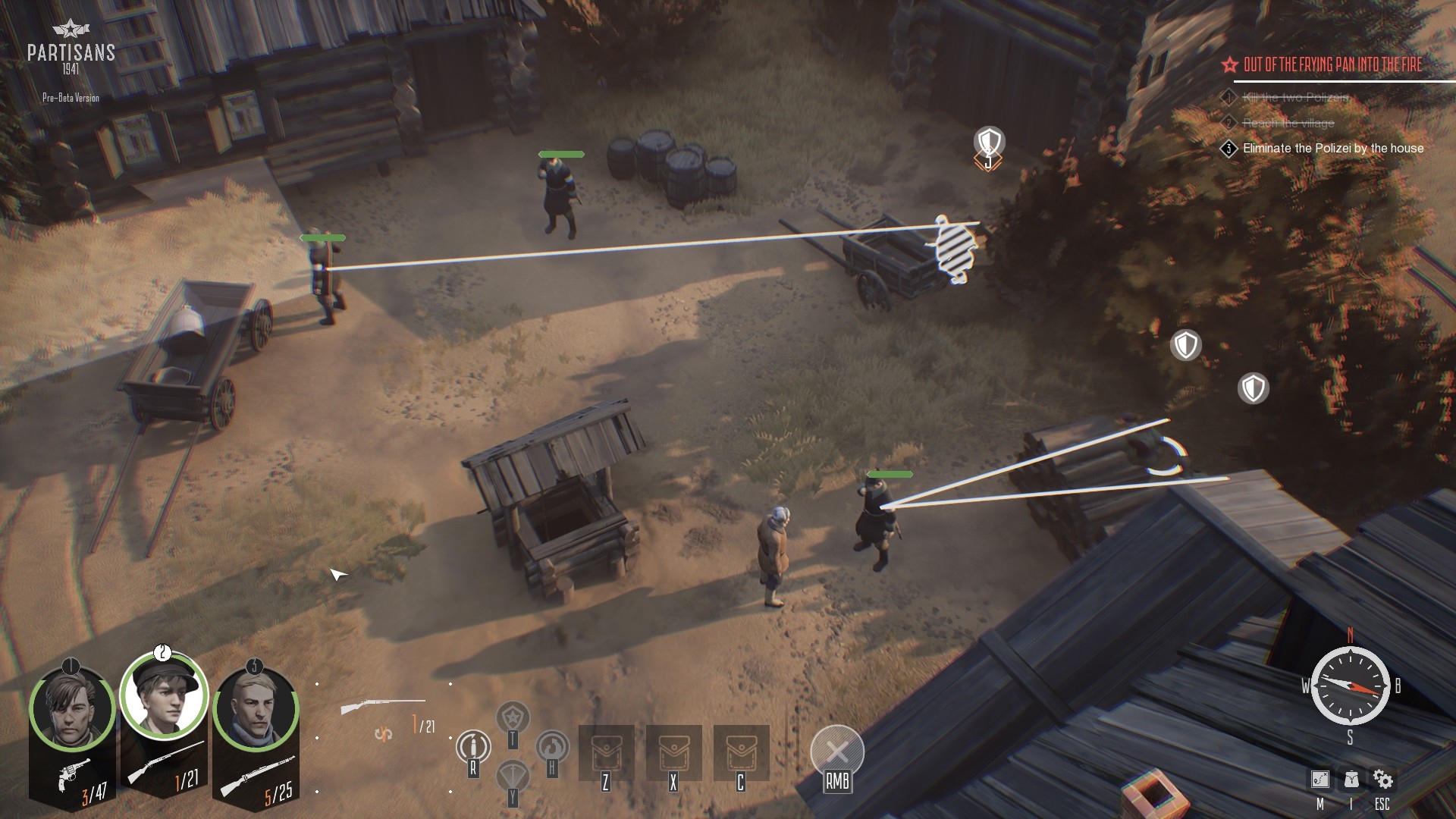 Minor aspects of the corridor-like demo venues that caused my crest to fall: 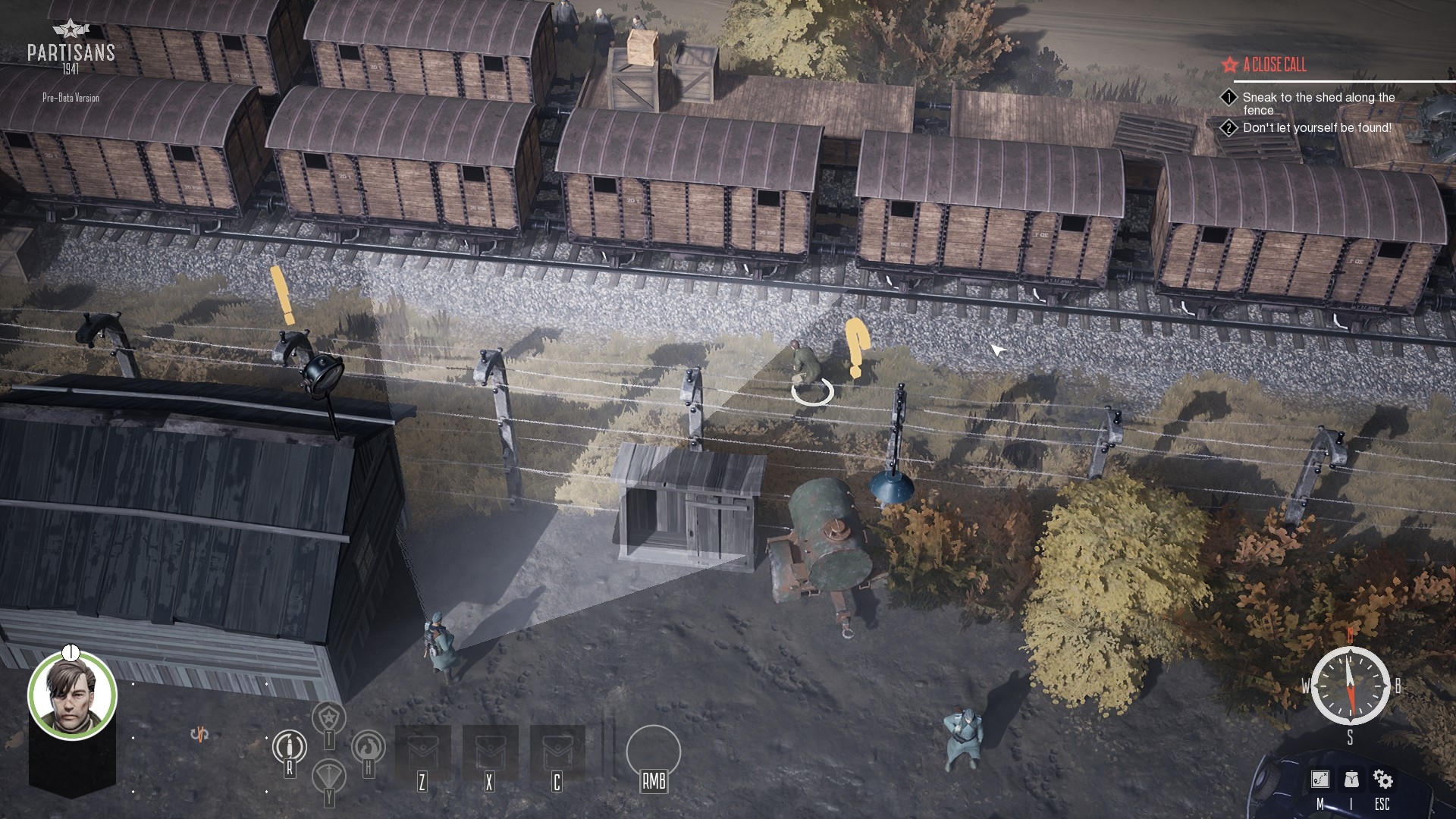 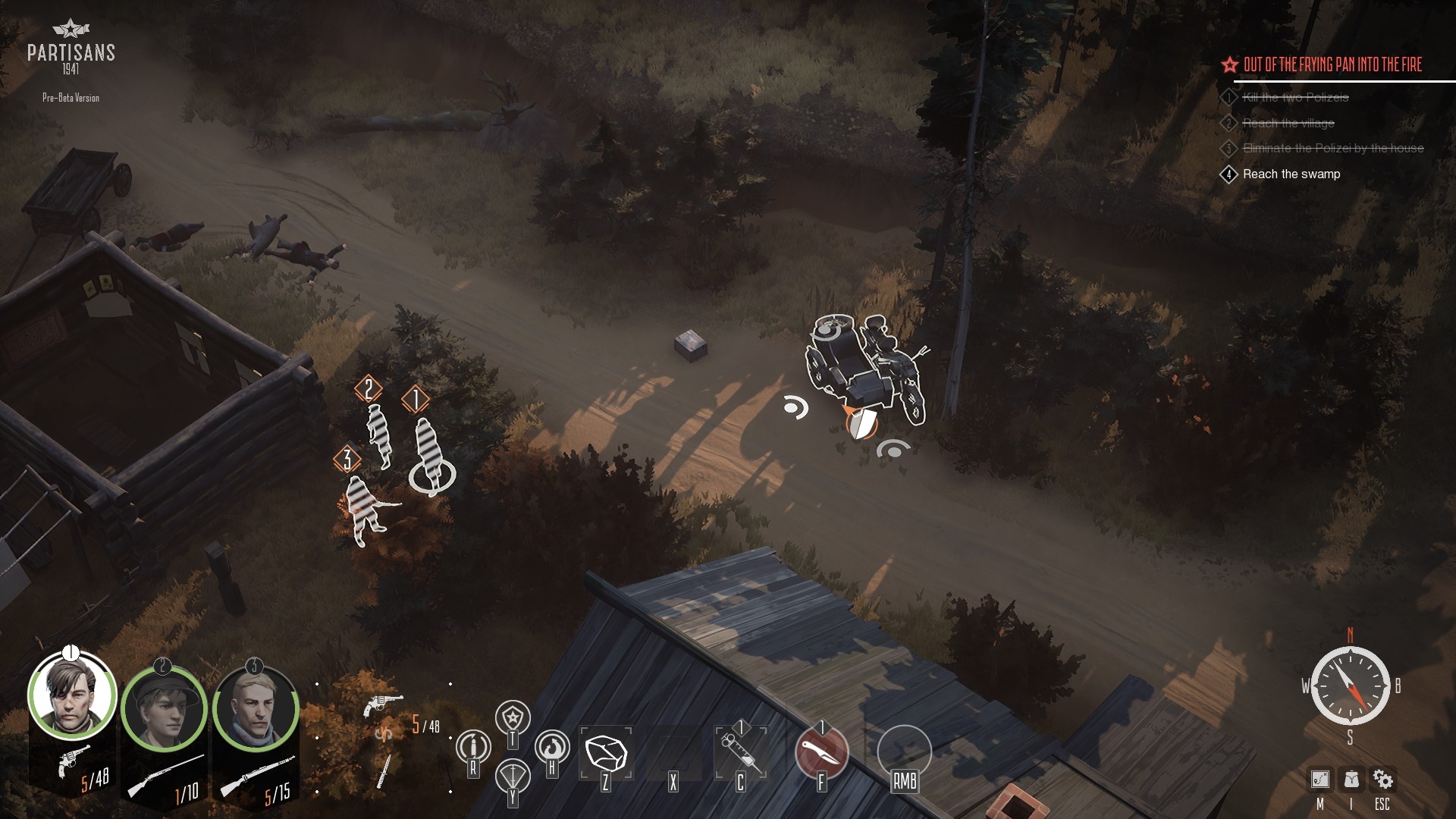 ^ This motorcycle combination provides cover but can’t be half-inched. 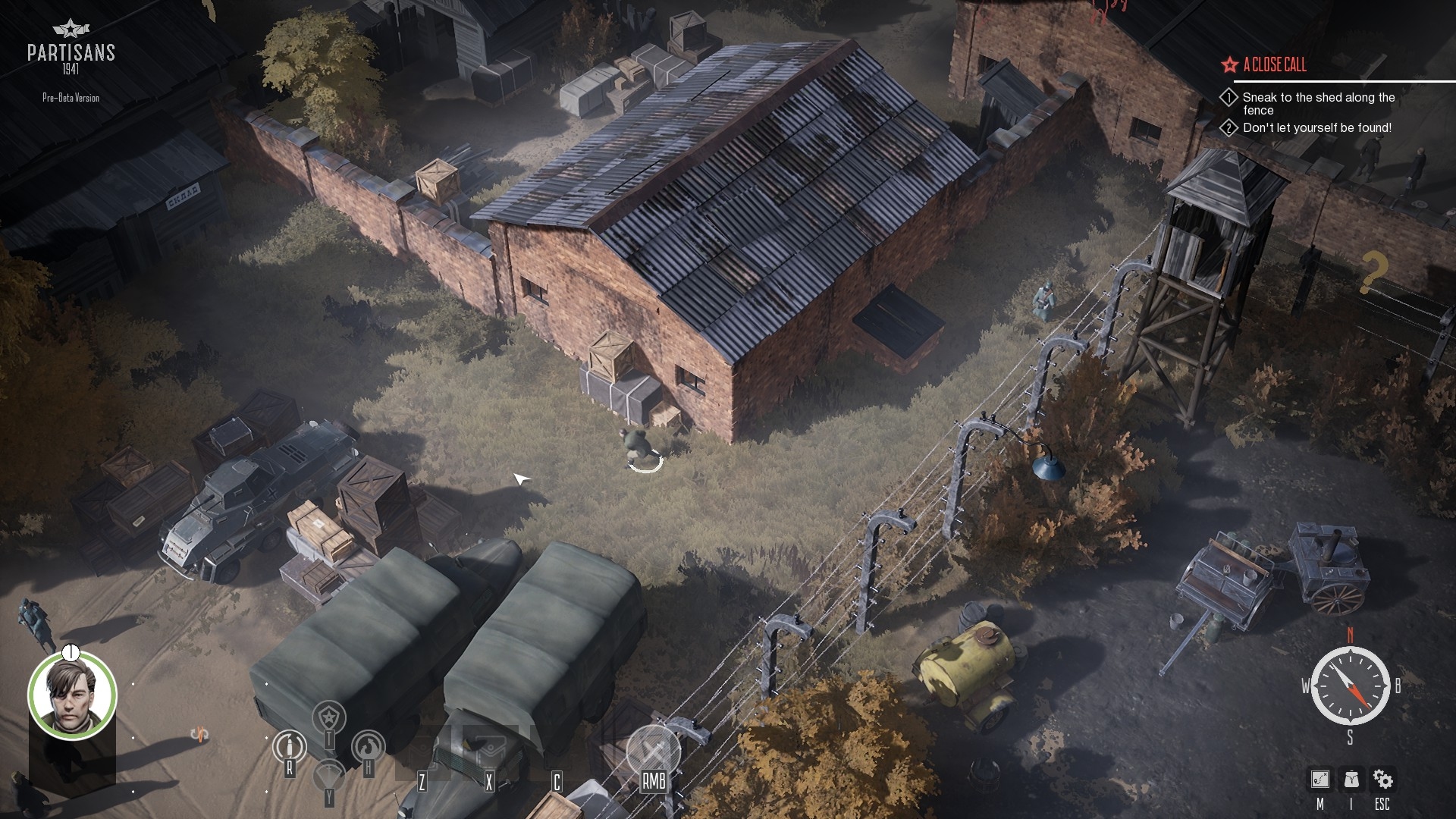 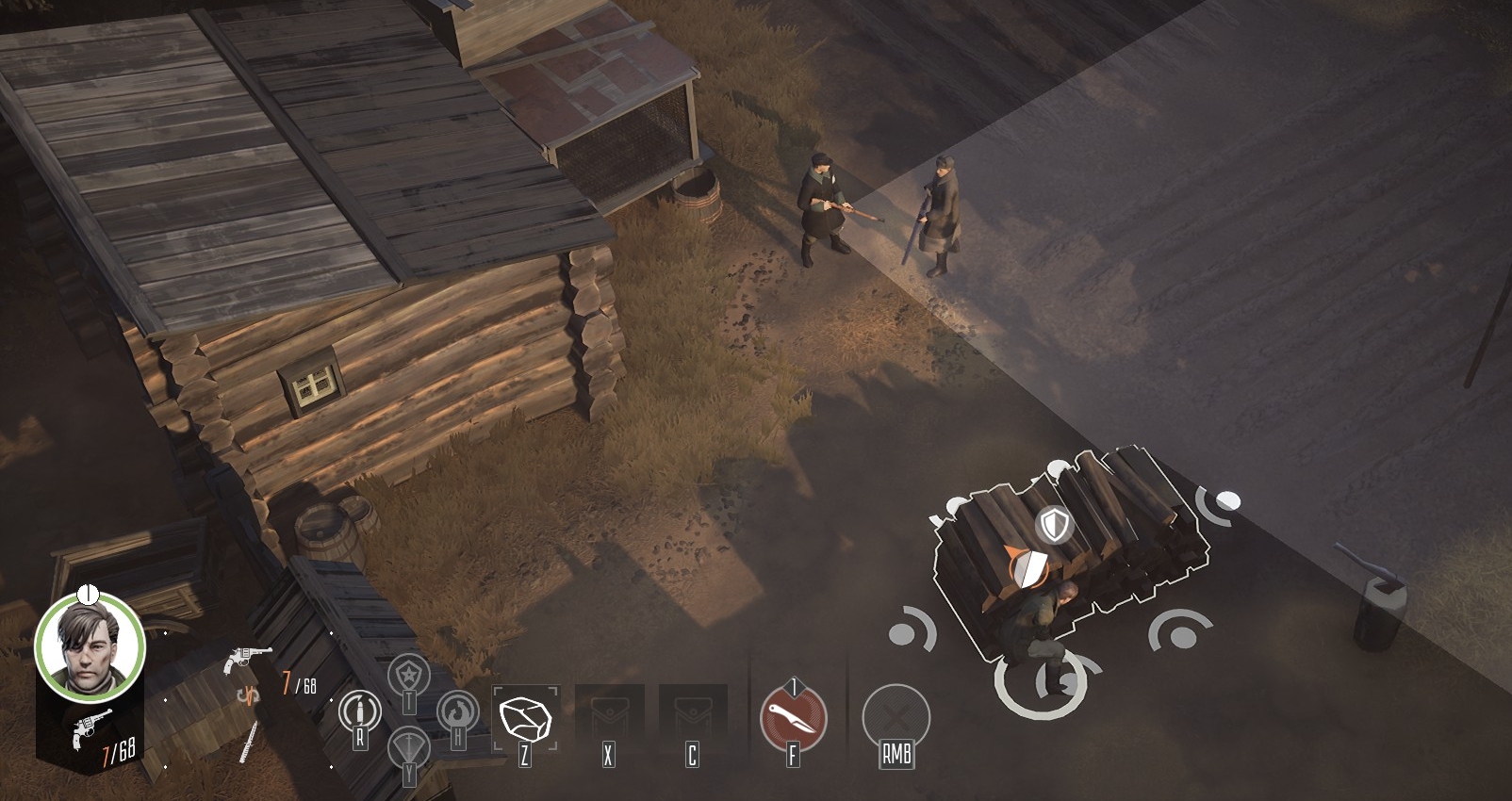 ^ The hatchet on the right can’t be used for felling fascists. 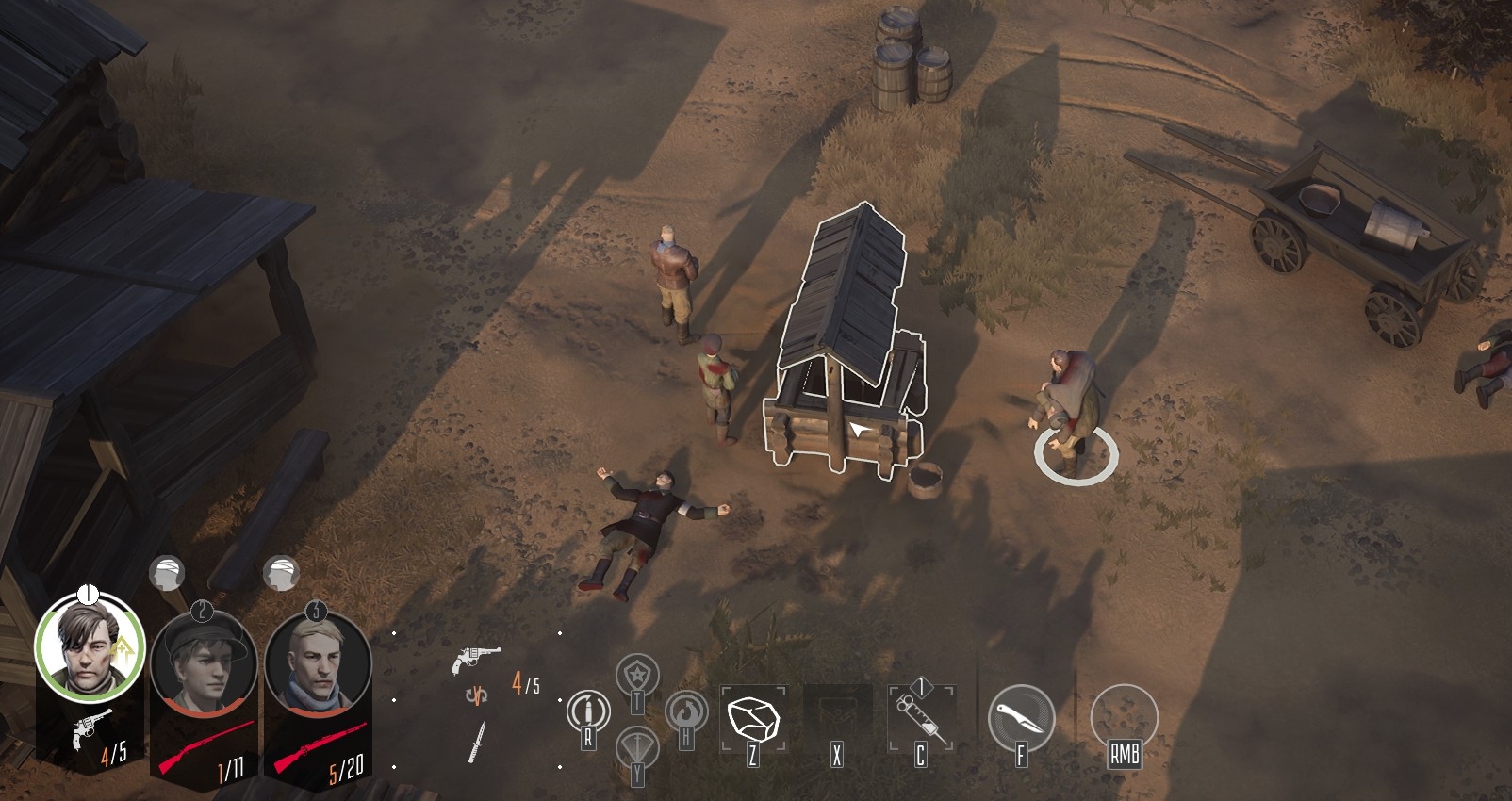 ^ This well doesn’t double as a crypt. 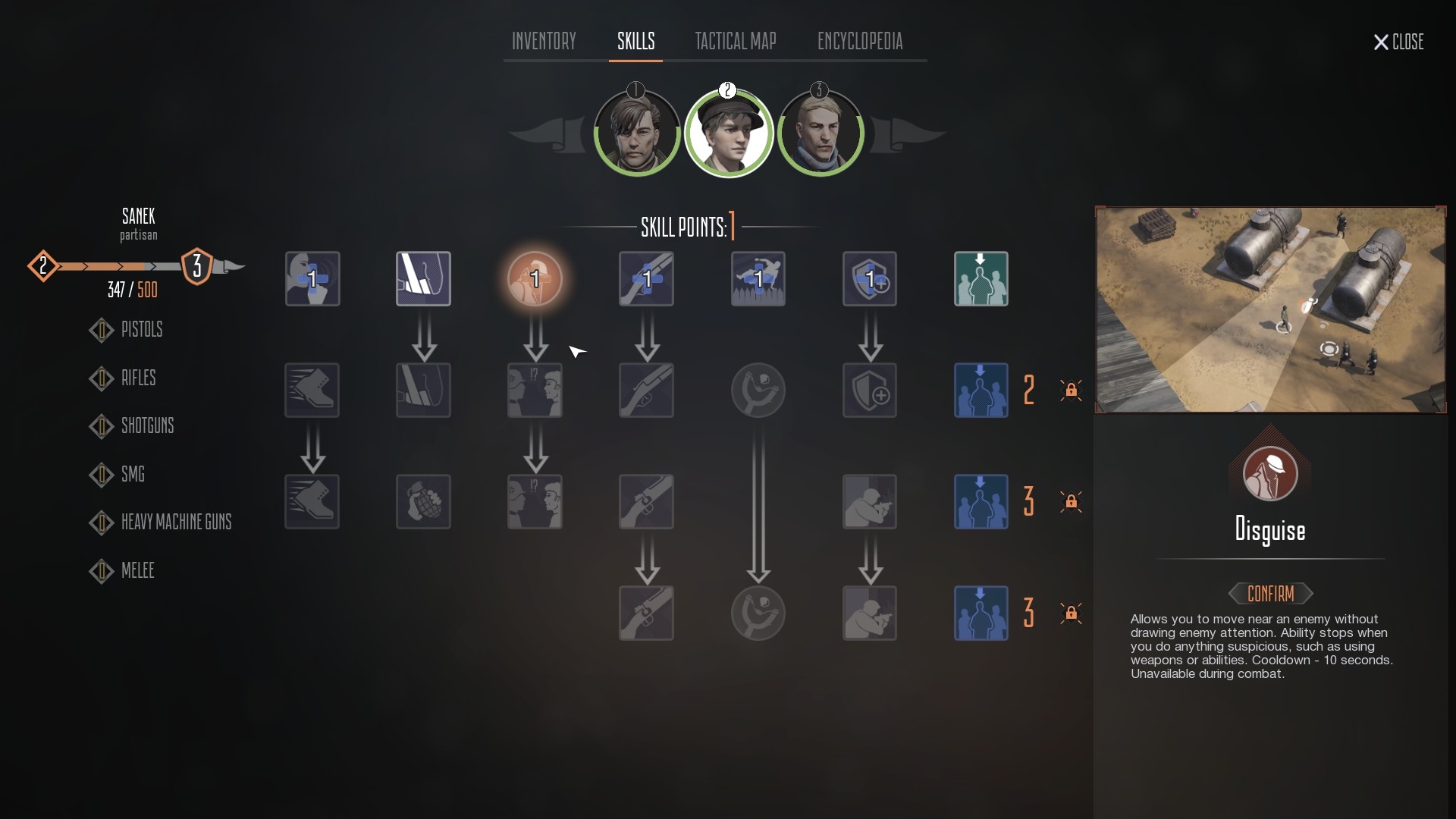 But don’t let me put you off. The free two-chapter taster might not inspire cartographic confidence but it does a pretty good job of teaching you how to move and slay stealthily, search and conceal corpses, use firearms and co-ordinate actions (Partisans features a mode very similar to D3’s Showdown). It also reveals things like character skill trees and long-term injuries that I wasn’t expecting, and alludes here and there to the base-building, man-managing, mission-picking metagame that could prove to be Partisans’ secret weapon. 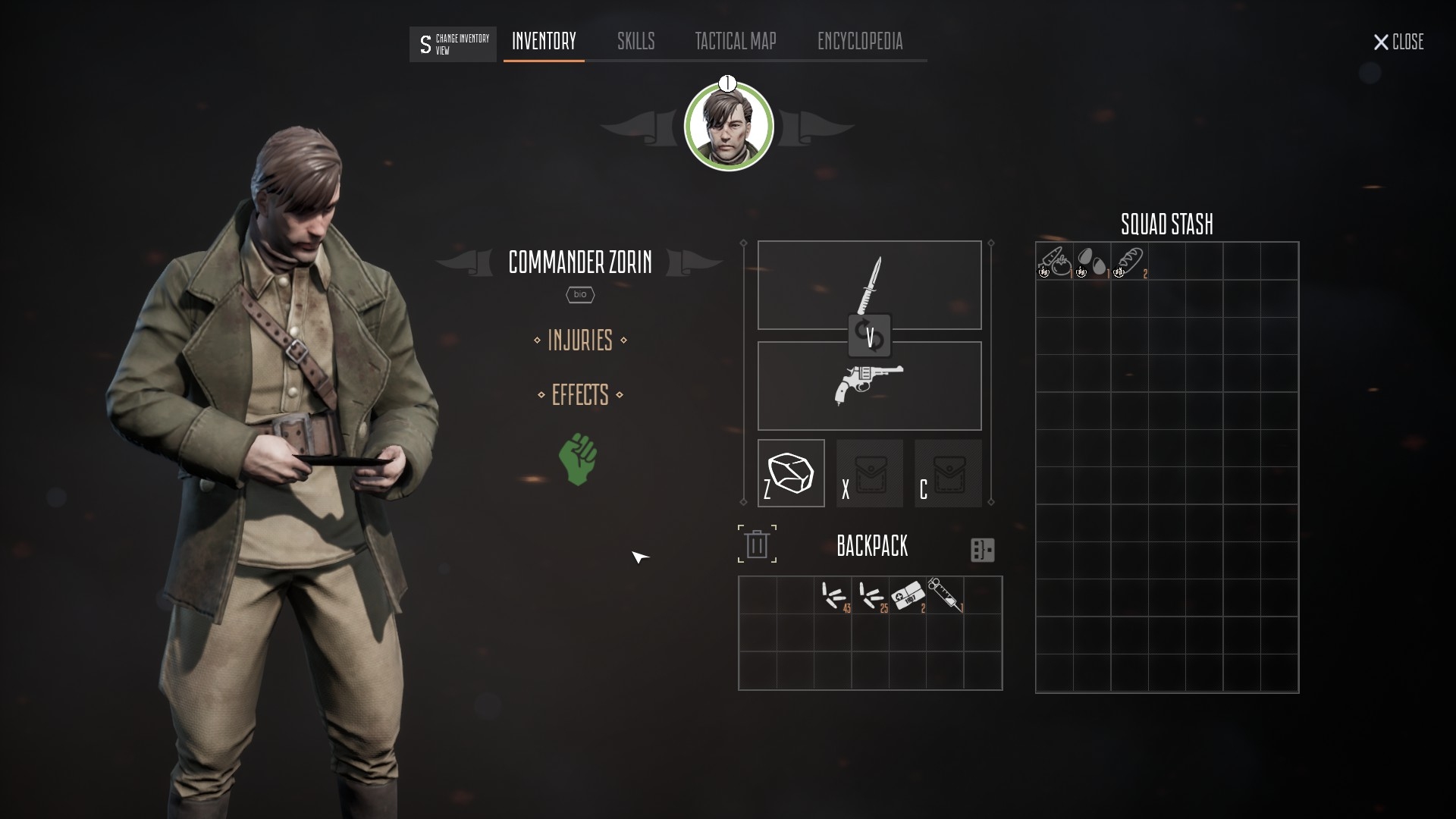 Are Ukrainian strategy smiths Starni Games goading Russian censors or doing their best to mend fences? Your guess is as good as mine. A few weeks after Strategic Mind: Blitzkrieg was banned in the world’s roomiest country because of a campaign cutscene showing Adolf Hitler and Goering lording it in Red Square, Starni have announced Strategic Mind: Spectre of Communism (Q4 2020), a follow-up focused on the Soviet drive to Berlin. 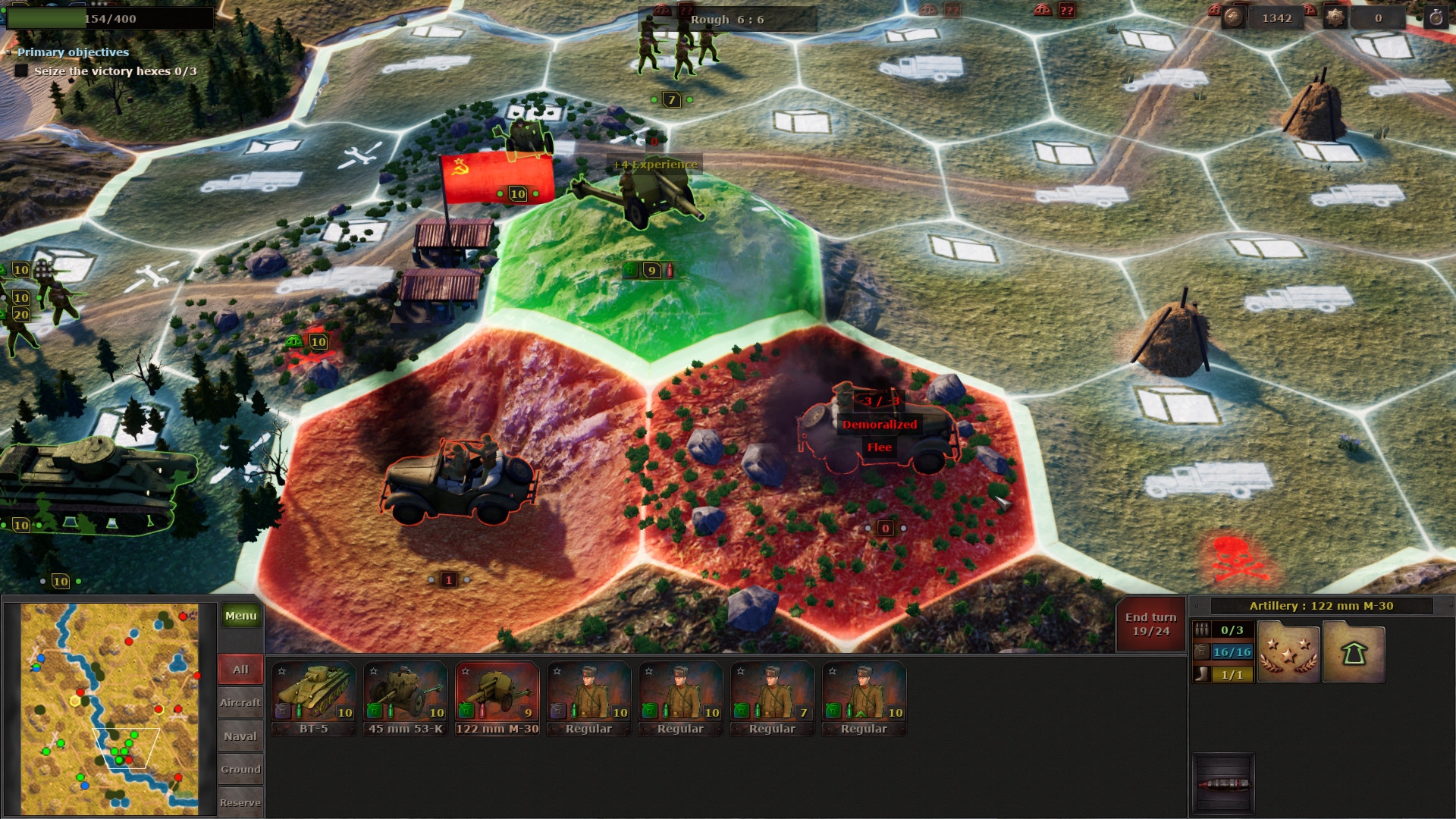 Taken from the intro to the Communist Manifesto, “spectre of communism” seems an odd phrase to slap on the cover of a game with a 20-mission Red Army 1939-45 campaign core. Of course, in Ukraine, a country that has gone to great lengths to decommunise, it’s very much “on-message”. Perhaps poor old Starni are simply doing their best to navigate a perilous politicolegal battlezone in which history is ruthlessly weaponised and distorted by both sides. 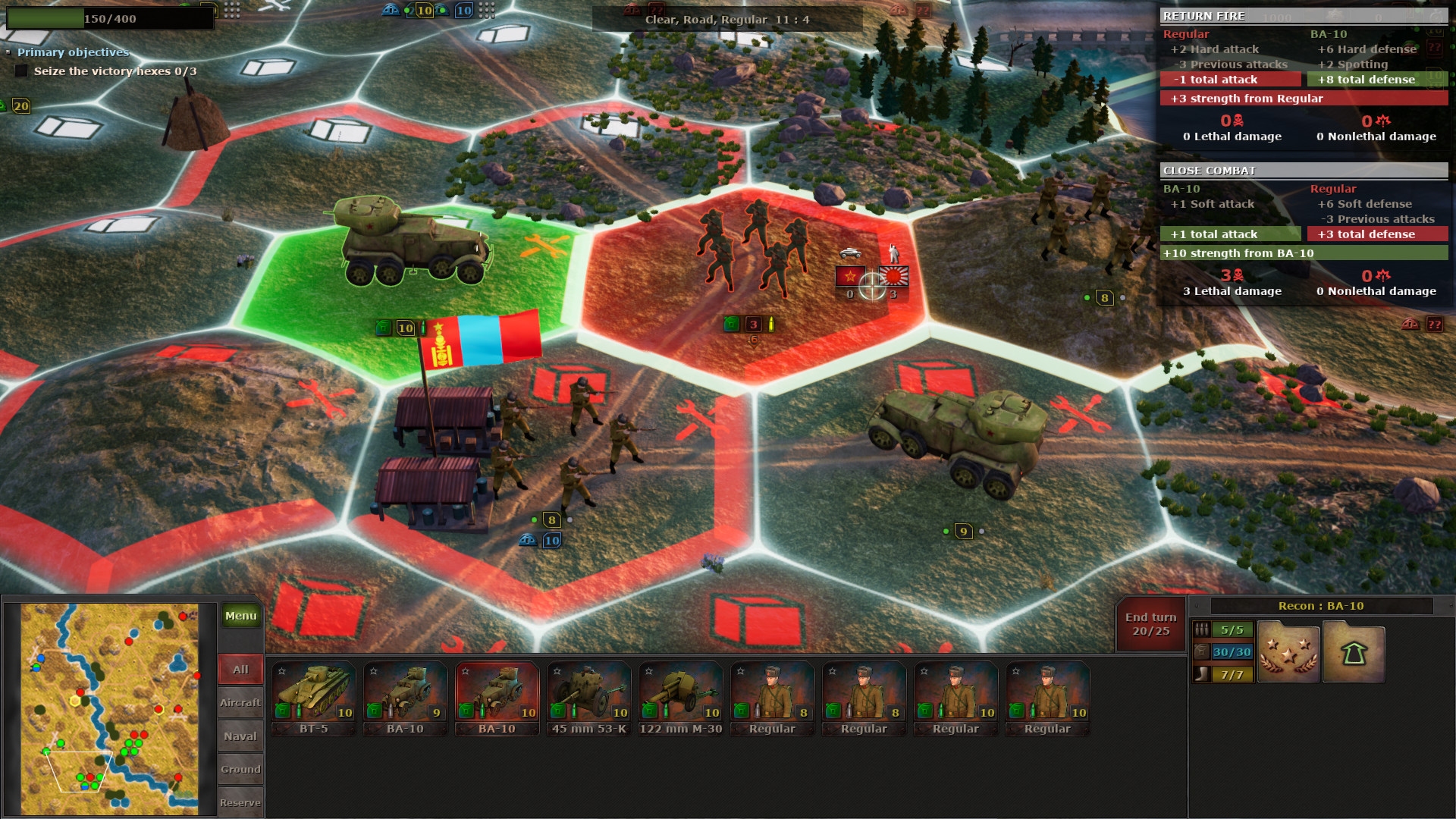 Or perhaps they’re simply victims of the Great Ost Front Game Glut. There have been so many Eastern Front entertainments made over the years, that finding an original, apt and appealing moniker for one today is almost impossible. Roll on the day when all games are referred to by their Steam numbers only. “What do you think of 1200333?”. “It’s a pale imitation of 753982 but I have to admit I’m enjoying it.” 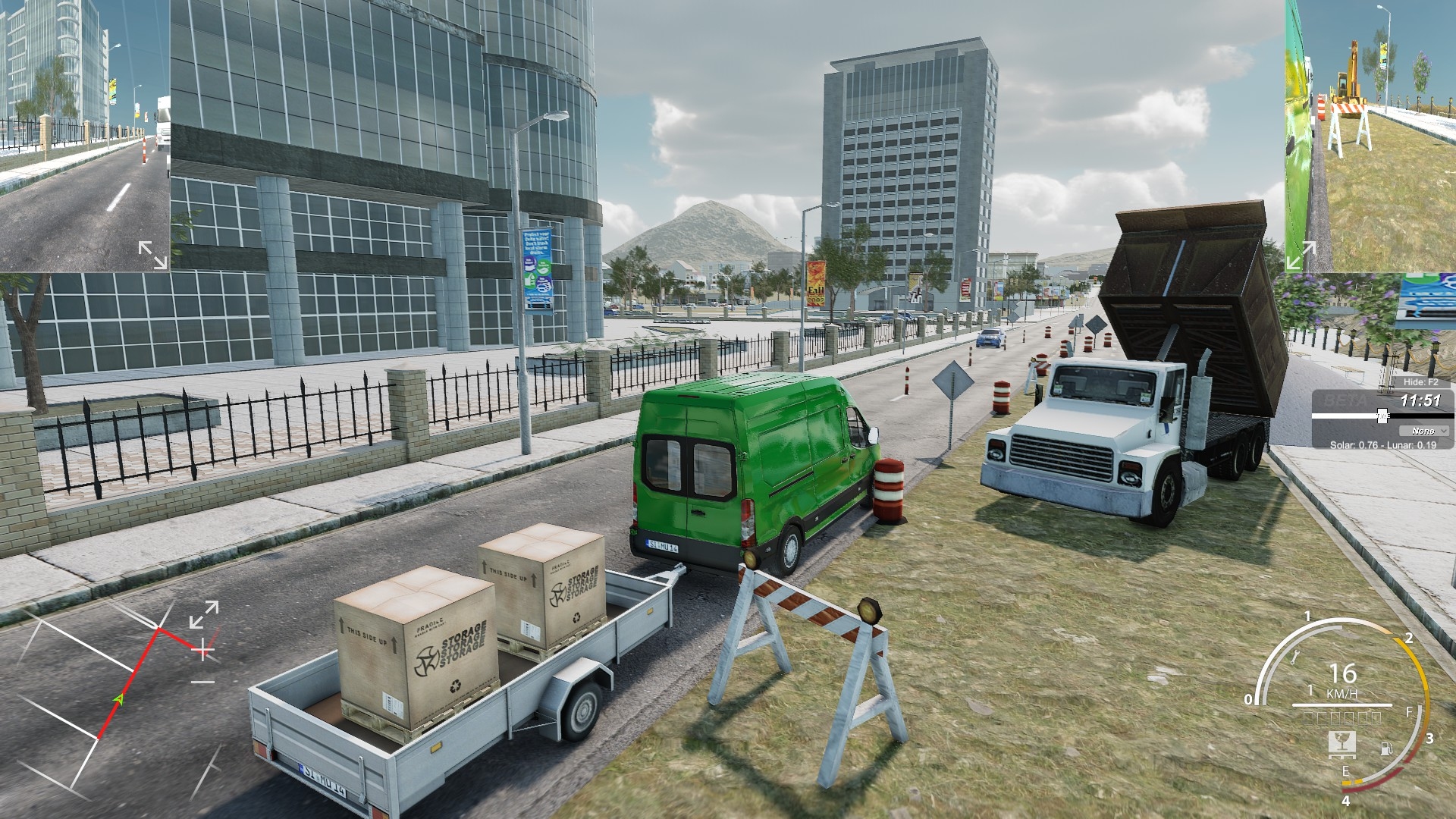 Talking of enjoyable pale imitations, I’ve been dabbling with Early Access Truck and Logistics Simulator this week. A multi-vehicle cargo loading and delivery sim made by four young devs from Ankara, it’s predictably rough around the edges and short on hectarage, but the concept is strong, the price low*, and the driving physics just about realistic enough to dispel thoughts of Out Run and Wacky Wheels. 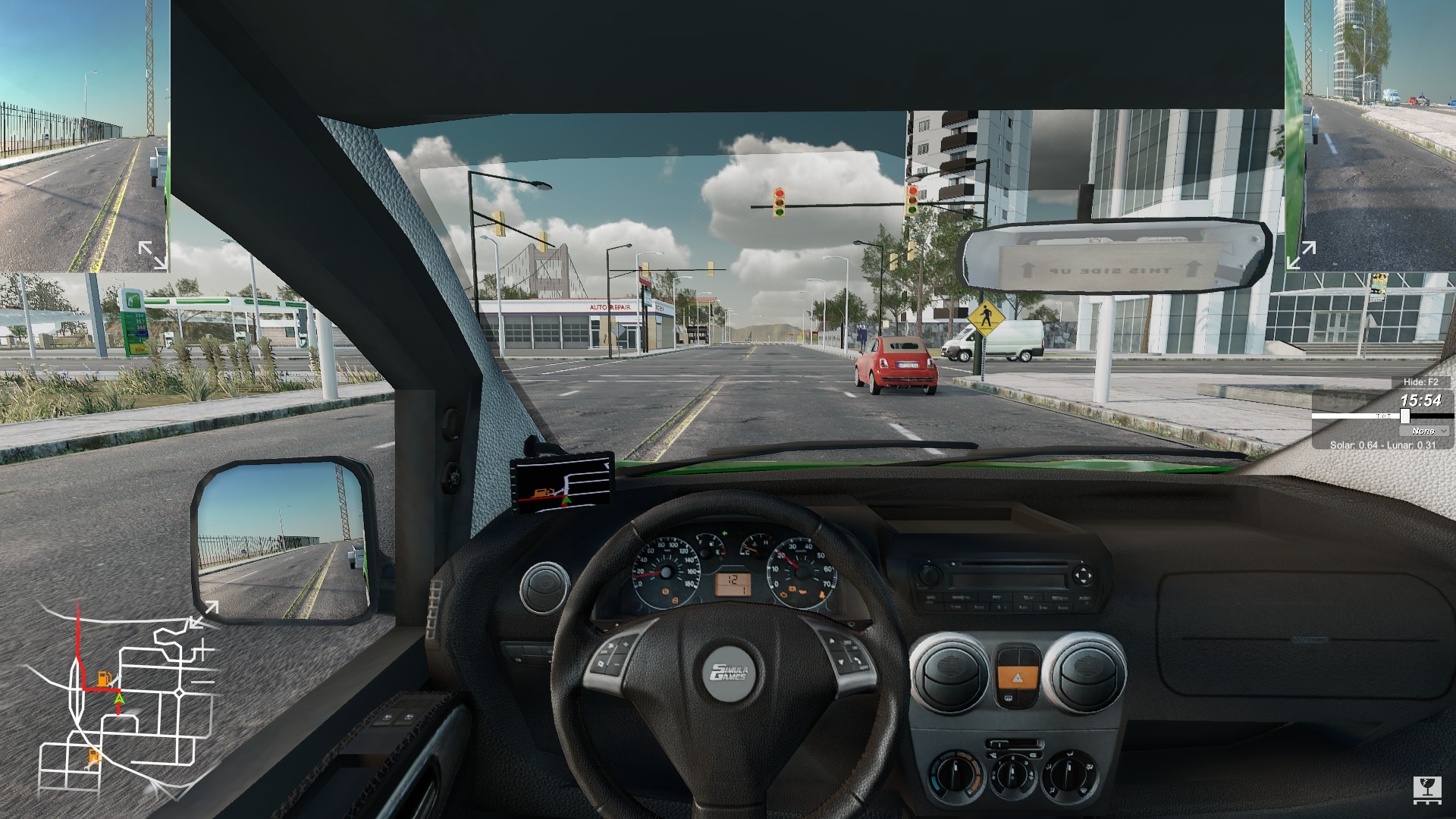 A Fernbus and Tourist Bus Simulator survivor, I was pleasantly surprised by the short load times and high/smooth framerates. A dyed-in the-wool mouse steerer, I was less impressed by the lack of support for desk rodents. 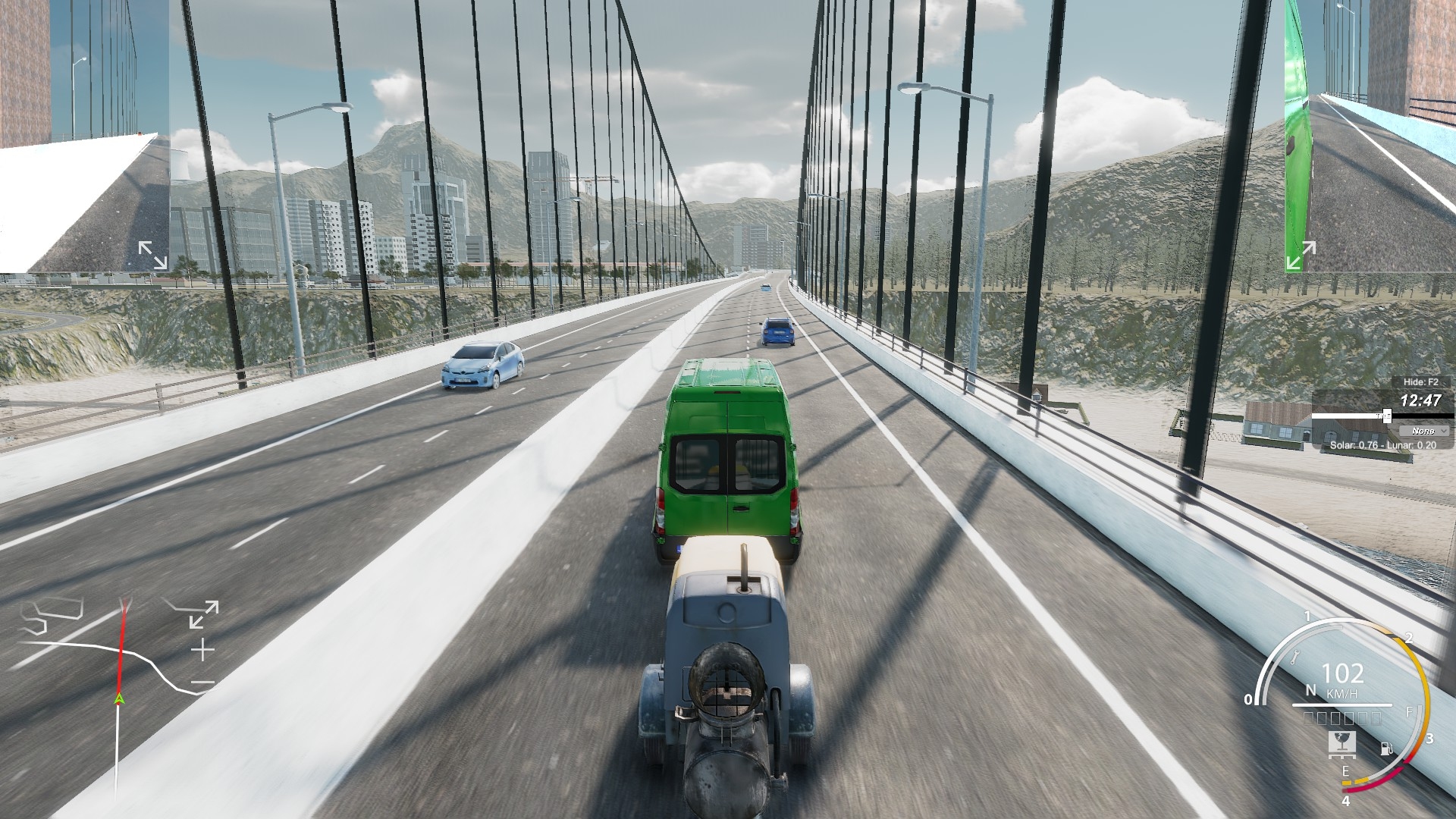 The map – sadly, a noncommittal everyland rather than a polygonal paean to Simula’s homeland – encompasses various grid-arranged towns and cities linked by calligraphic curlicues of motorway and minor road. There are bridges, tunnels, small sections of coast road and alpine hairpins. Traffic is light, jams unheard of. Driving pedal to the metal, the longest jobs take less than fifteen minutes to complete, even if, like a wine with a long finish, you linger on the pallet.*

* This joke is the property of Sidekick Simon 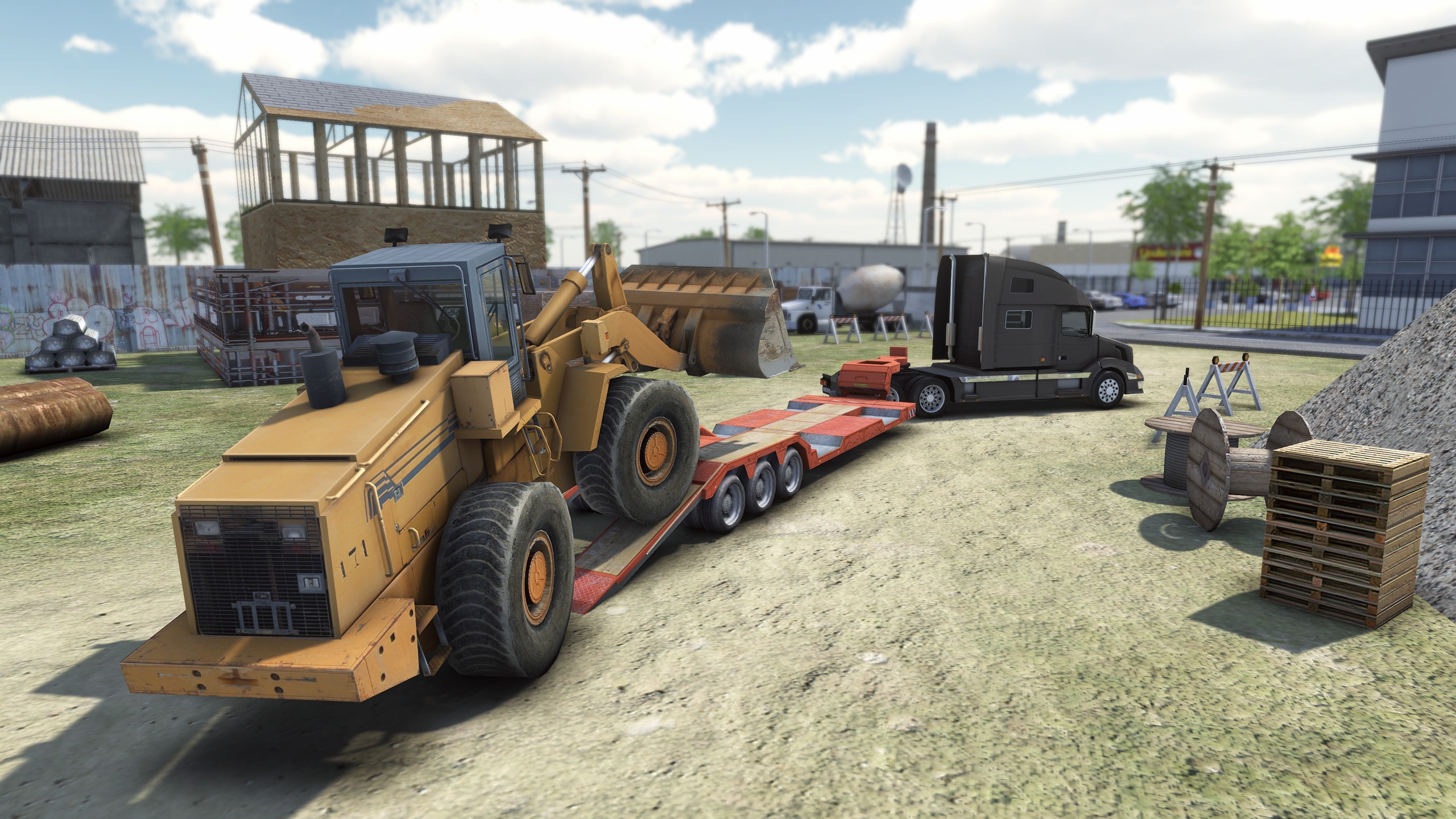 The majority of the six hours I’ve lavished on T&LS thus far have been spent conscientiously earning the cash necessary to purchase new vehicle types (I’m now the proudish owner of a minivan, a panel van and the Scania pictured below). Ignore yesterday’s heat-induced harbour dip… 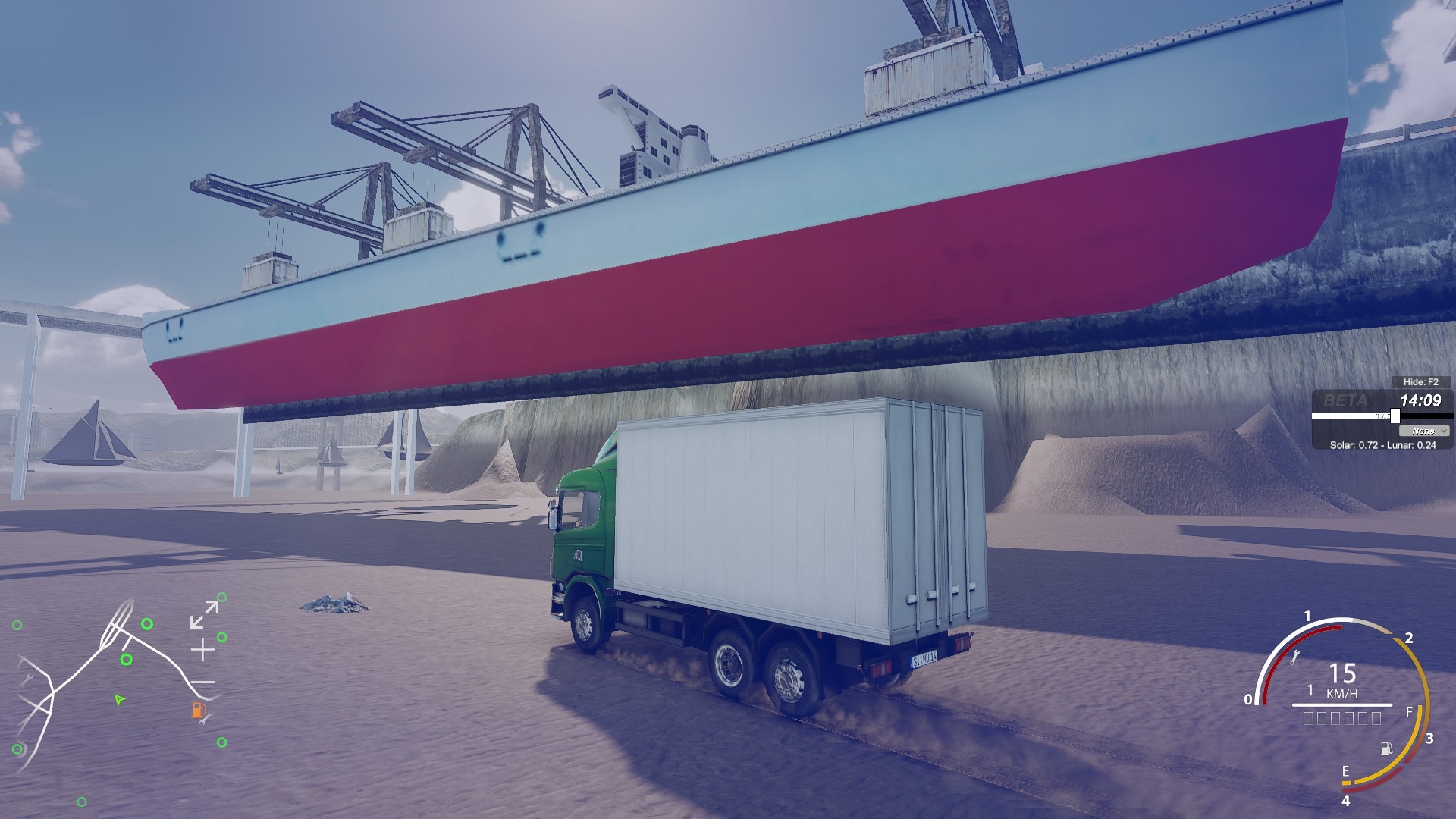 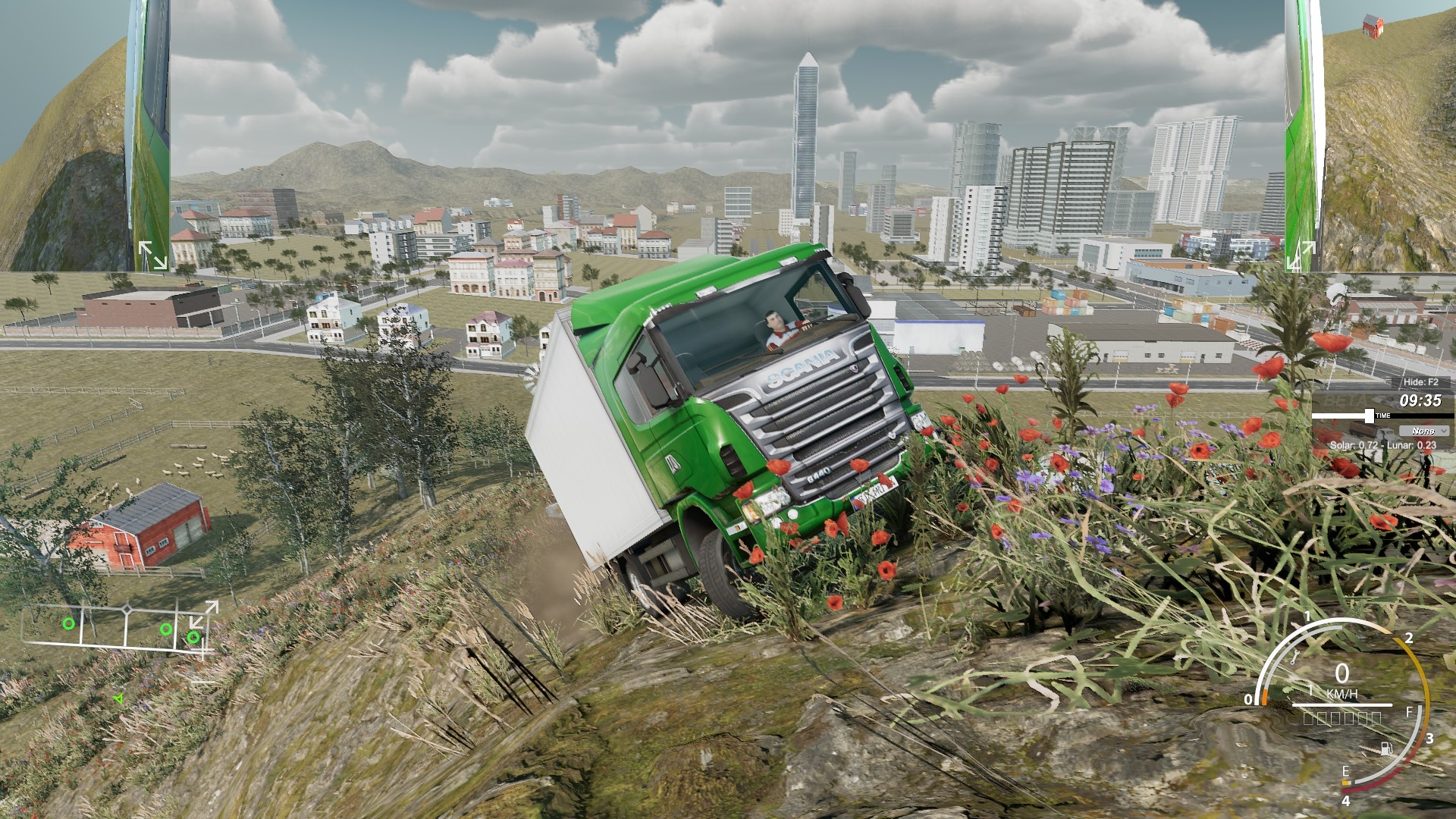 and bout of hooliganism… 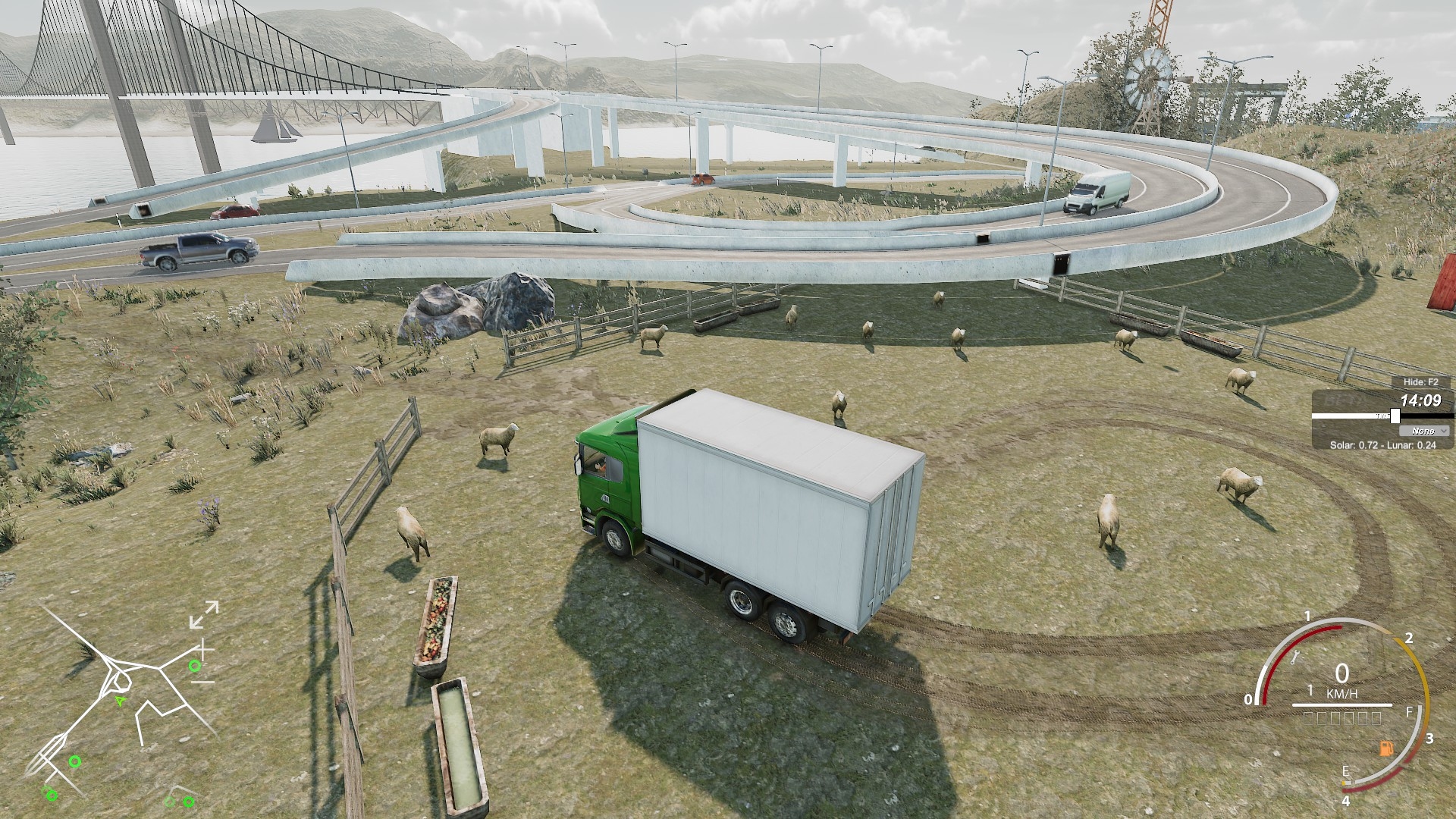 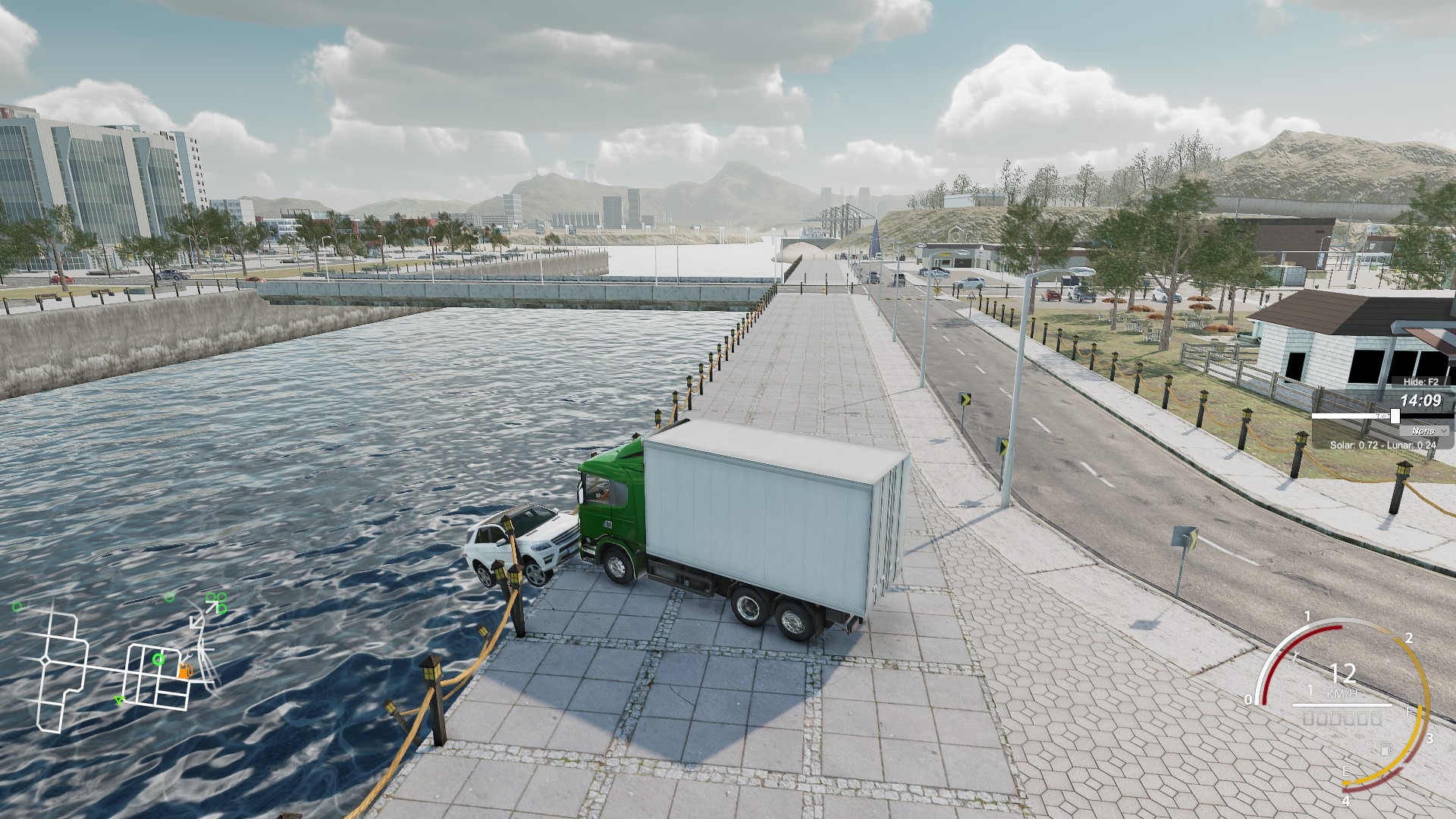 I’ve been happiest at the wheel of one of the game’s forklifts. 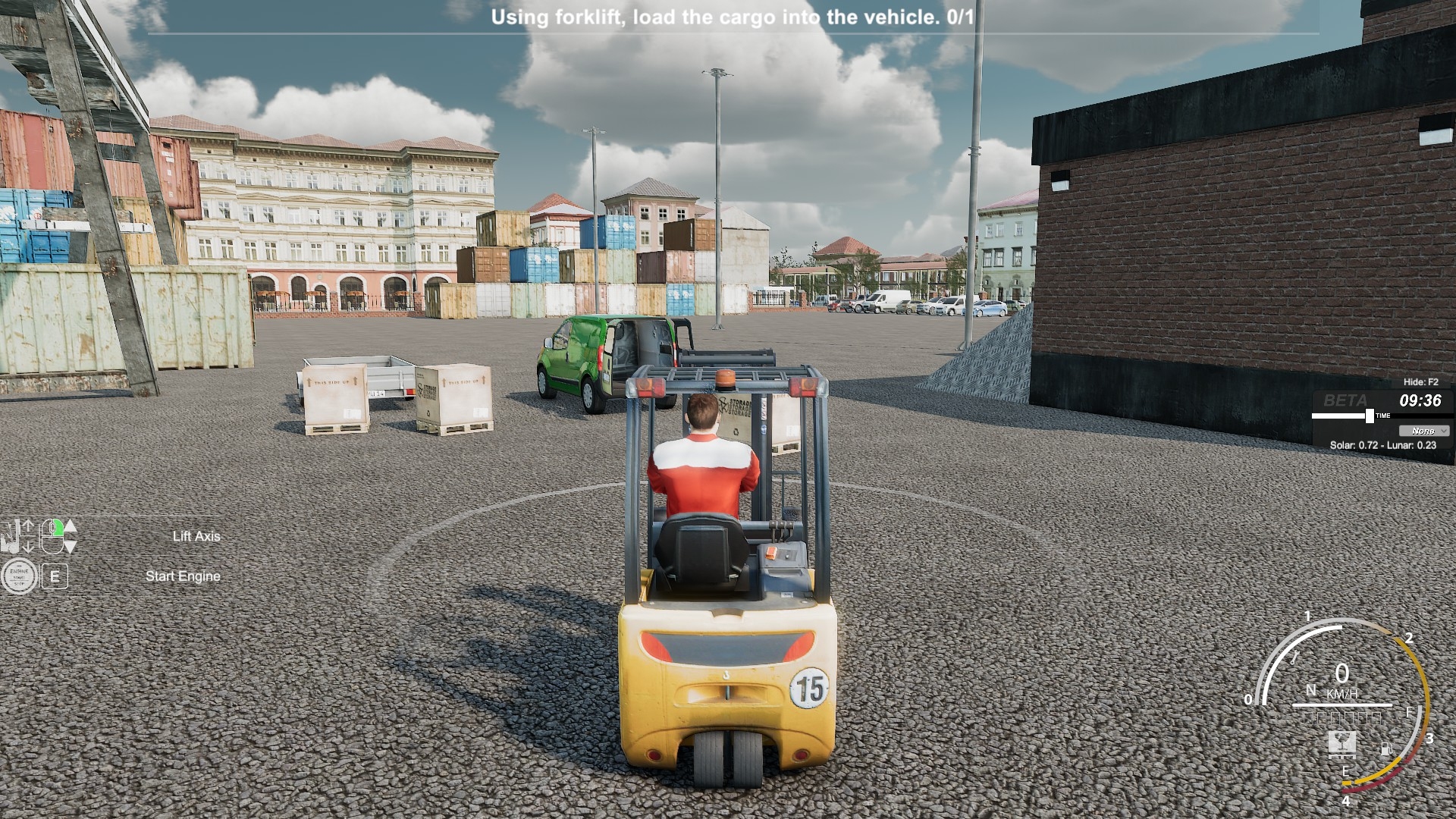 Most jobs start with the loading of multiple pallets. Although the pronged porters that lurk in every warehouse and factory yard lack the tiltable masts and strafable tines of their prototypes, they handle plausibly. 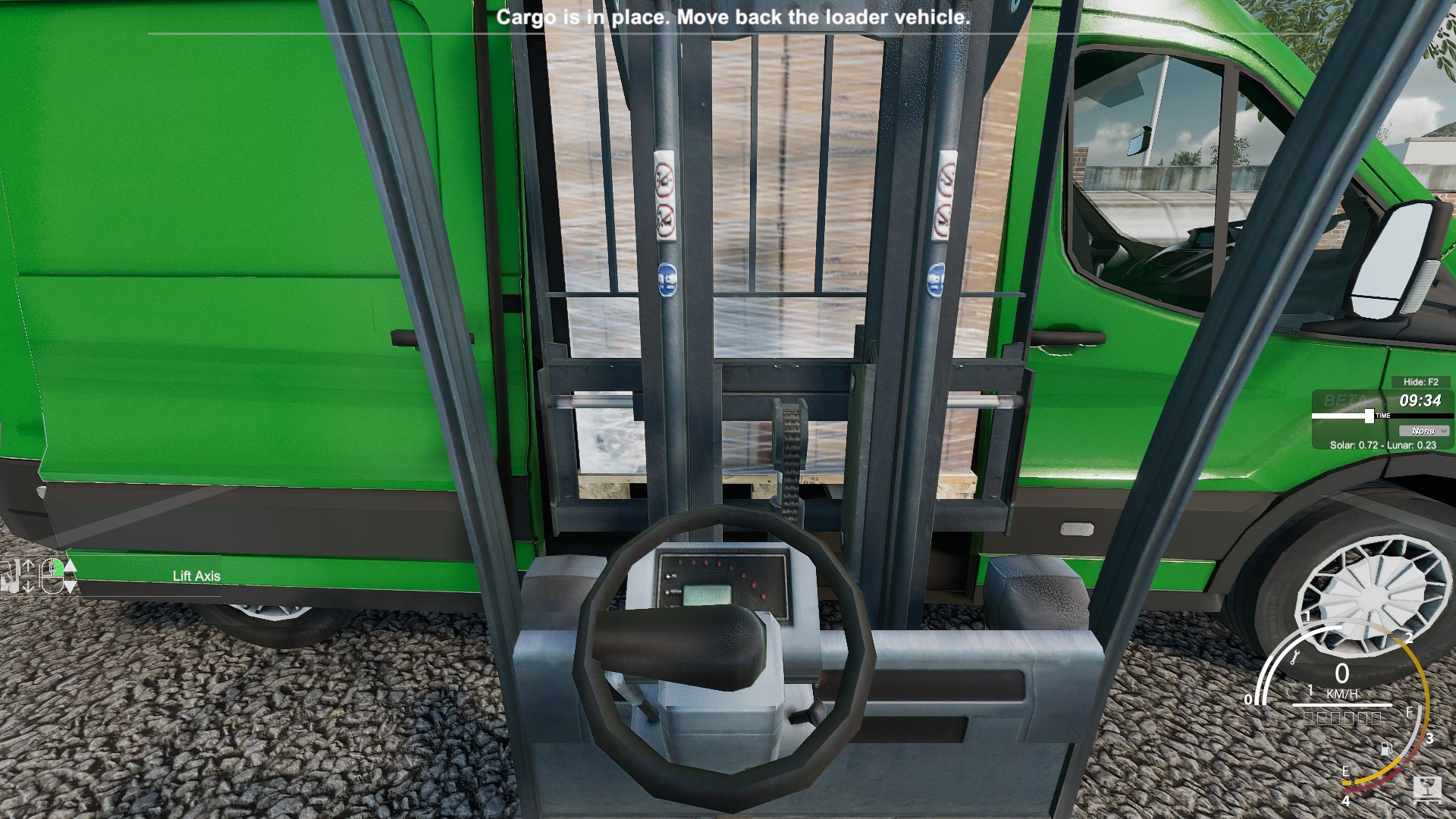 After reversing trailers into invariably awkward delivery spaces, depositing polythened pillars of undefined commodities carefully onto van, truck, and trailer beds is the game’s trickiest task and therefore one of its most gratifying. The way vehicle beds sink when loads are placed, providing the visual cue to start reversing, pleases me more than it ought to.