Ever fancied commanding your own darkly violent army of vampires? Well we have, and in Immortal Realms: Vampire Wars, that’s exactly what you’re going to do too. And the best part? You can play it for yourself right now in Game Preview on Xbox One! So we thought we’d give you the lowdown first-hand, to introduce the intensely tactical gameplay and give you a head start in your quest for undead supremacy.

For the freshly-turned among you, Immortal Realms: Vampire Wars is a turn-based strategy game that combines empire management with turn-based combat. The game is set in the world of Nemire, a real melting pot of vampire lore where three rival vampire clans rule their respective territories with an iron fist fang – the bloodthirsty Dracul, the bestial Nosfernus, and the aristocratic Moroia. For as long as anyone can remember, the Dracul have dominated the lands of Warmont, realm of the Bloodthrone. But the threat of war is looming on the horizon…

For launch, the
Game Preview version of Immortal Realms: Vampire Wars contains the full Dracul
singleplayer campaign, as well as a comprehensive tutorial to help you get to
grips with the different gameplay systems. As we get closer to full release,
we’ll be adding the Nosfernus and Moroia campaigns along with the sandbox and
skirmish modes. The other clans and modes add a lot of variety to the game, so
definitely look forward to that.

When you start single-player mode, you’ll be presented with the game’s tutorial, which I’d really recommend playing through if you want to spend your time sucking blood rather than, well…sucking. Essentially, the gameplay is broken down into two core elements. First is “Kingdom Mode”, which is where you plan your general maneuvers, recruit more troops to your army, power up your skills, expand your territory, upgrade buildings and all the other good stuff that any vampire lord would need to do as they prepare for war.

Once you’ve plotted out your moves, you might be close enough to an enemy to start a battle. You can undertake these battles manually or let the AI decide the outcome for you – which can be a time saver if it looks like you can easily win a fight. When you do go into Battle Mode, you’ll be presented with a grid-based battlefield, and before the action starts you’ll be able to place your vampire lord and their troops wherever you like. Combat is turn-based, with each unit able to move, attack and defend in different ways. To win you’ll need to pick your moves wisely, analyze your enemies and exploit their weaknesses. But if you do get into a tight spot, don’t panic – you’ve got an ace up your sleeve that might just turn the tide.

Spells and abilities can really save the day (or, uh…night) in Immortal Realms: Vampire Wars. From devastating area of effect attacks to power ups and strategic bonuses, these abilities can be put to devastating effect by activating skill cards. As you’d expect, abilities and spells vary depending on which vampire clan and class you use. Each clan plays very differently to each other and also have very different stories to tell, so it’s definitely worth playing through multiple times to try different playstyles.

We’ve spoken quite a bit about the vampires in Immortal Realms, but what about humans? In the world of Nemire, humanity for the most part sits in an uneasy alliance with the Dracul, offering their blood willingly in exchange for protection. But while most humans are firmly under the heel of their vampire superiors, there remains a faction of free men that are determined to overthrow their oppressors. As a ruler, your human subjects are a valuable resource, and will need to be herded where necessary, to turn them into low-ranking troops or to feed on them for sustenance.

I hope you’ve enjoyed this intro to Immortal Realms: Vampire Wars. We’d love to hear your feedback, so after you’ve played be sure to head over to the official Immortal Realms Xbox Club and tell us what you think! 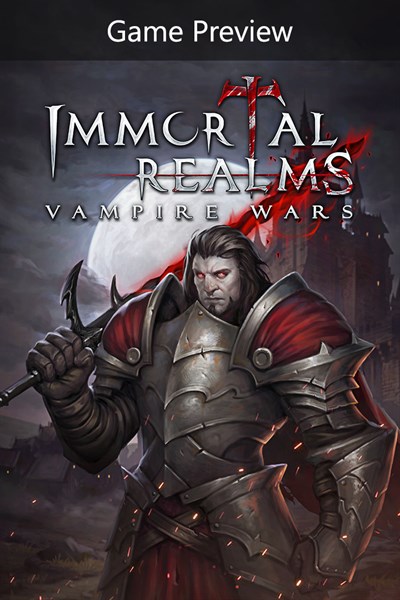 ☆☆☆☆☆
★★★★★
Free Trial
This game is a work in progress. It may or may not change over time or release as a final product. Purchase only if you are comfortable with the current state of the unfinished game.

For as long as historians can remember, the ancient Dracul bloodline has ruled over the mysterious lands of Warmont – Realm of the Bloodthrone. Inside the secluded borders of this land, an unholy court of vampires feast on the blood of their human subjects. And, as long as they give it willingly, a vicious peace between mortal and immortal is kept alive under the watchful eye of the vampiric rulers – Vlad and Cecilia Dracul, forever bound by eternal love.

To the east, a cold wind blows over the desolate planes of Mourterra – The Land of the Dead. No humans live on this barren and cursed soil, and yet the land is far from deserted. Horrifying remnants of the ancient and corrupt Nosfernus bloodline stalk here in silence, patiently waiting for their chance to once again plague the lands of the living.

Meanwhile, in Esain – The Frozen North, another bloodline of vampires resides in solitude and isolation from the world. For the mystical clan of the Moroia, magic is blood, and blood is magic… and it runs thick in their cold, blue veins. No being – living or dead – dares interrupt their dark rituals and bloody soirées.

Tonight, the smell of blood is strong on the wind, and a red moon lights up the dark sky. A new vampire war is imminent, and none will be spared from the coming horrors.

Immortal Realms: Vampire Wars is an engaging strategy game set in a dark vampire world in turmoil, that combines empire management and turn-based combat with unique card-game elements. Descend into a mythical world filled with horrors and legends – and hurl yourself into a compelling gothic epos paired with a challenging game experience.

FEATURES:
• The Truth Unfolds: Discover the secrets of Nemire, and experience an enthralling story spanning across 12 meticulously crafted missions and four unique environments, from the perspective of four mighty vampire lords, each with their own goals and agendas.
• Discover the Bloodlines: Command one of three unique vampire clans with distinctive units, powers, gameplay mechanics and characters. Play as the bloodthirsty Dracul, the ancient Nosfernus or the mystical Moroia!
• Vampiric powers: Original card game elements enhance the gameplay and provide a refreshing take on the genre. Each clan and vampire lord has access to their own set of cards, which can be synergized into powerful combinations.
• Strategy & Tactics: Command your armies, recruit new units and unlock crucial technologies in the strategic Kingdom mode, and then put your tactical skills to the test in the action-packed Combat mode.
• Varied Content: Choose from three different gameplay modes, such as the story-driven Campaign, the open-world Sandbox, and the hard-fought Skirmish mode.

Full details on the latest status of the game, how you can give feedback and report issues can be found at www.kalypsomedia.com.