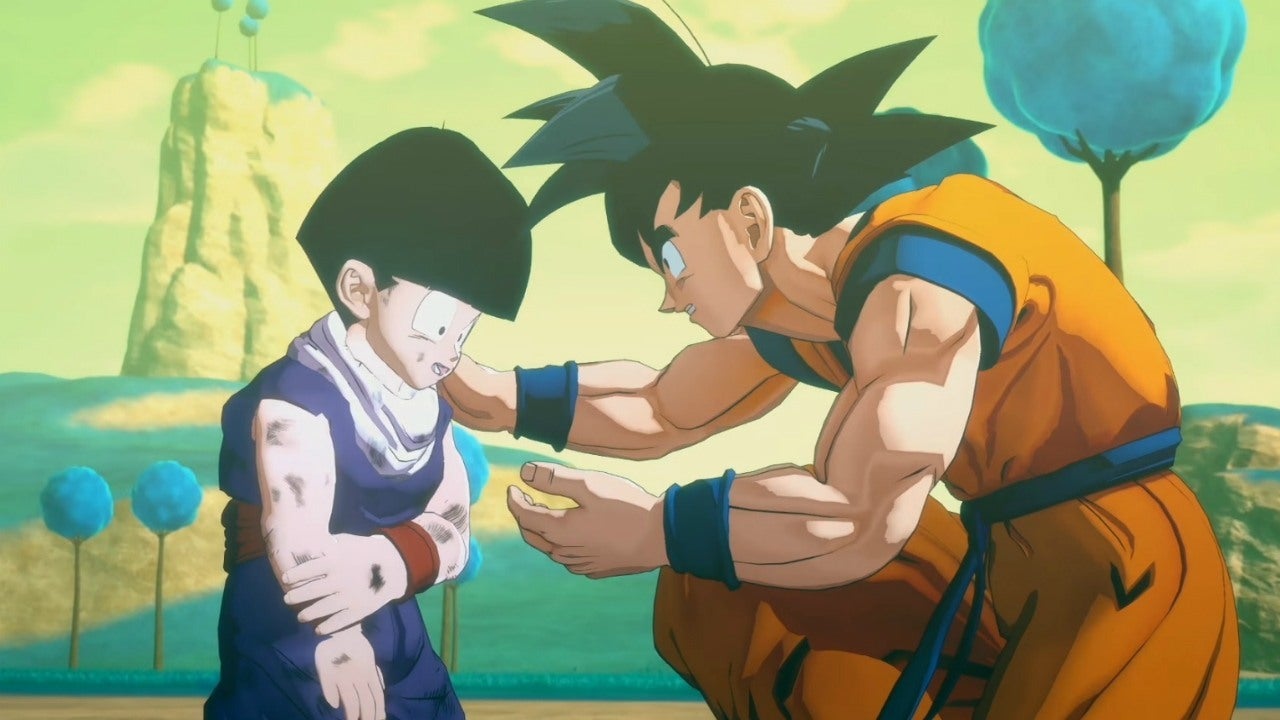 All right, let’s start broad to get some general impressions out of the way. Without mincing words: yes! I’m fairly confident saying that Dragon Ball Z: Kakarot is, at the very least, a good, if a bit unpolished game. As of this moment, I am about 23 hours in and feel like I am just about 3/4s of the way through, so obviously I want to withhold my final judgment until after I beat it, but thus far I’ve been very much enjoying my time. That said, it works much better as an arena fighter than an RPG, and the bits where you’re just flying around in the semi-open world looking for sidequests are not as strong as they could be. There are a ton of mundane fetch quests, scavenger hunts, and “beat up these same three generic robots/saibamen/frieza force soldiers” combat missions that get very old, very quick. Not to mention, the rewards for beating them aren’t that enticing either.

But when the plot picks up and you’re able to just narrow your focus on the main story of each arc, Kakarot really shines with fun combat and what is very likely the best retelling of Dragon Ball Z in video game form.

“How does the combat feel? From the previews and the trailers, it looked pretty shallow.” – kirby_ate_wes on IGN.com

Once I started to learn some of its intricacies, I learned to really love the combat. It’s shallow in the sense that there’s not much variance to your attacks, but there are a lot of smart systems in place that force you to always be on your toes and reactive to whatever your opponent is doing, which prevents it from ever becoming a mindless button-masher. In fact, Kakarot actively punishes you harshly when you just mash attack mindlessly, since some enemies have attacks that can’t be interrupted and will stun you for what feels like an eternity if they hit.

I’ll go into some more detail in the full review, but I think combat is definitely Dragon Ball Z: Kakarot’s strongest aspect.

“Are there powerups/transformations? Like can you go Super Saiyan in a fight, or is it automatic?” Anri01 on IGN.com

Yep! The way it works is you equip a transformation to a specific skill palette that you access by pressing in both triggers and then the face button of whichever one you want to activate. Going Super Saiyan increases your damage by a certain percentage depending on its level, but drains your ki constantly. Activating Kaioken for Goku increases your damage by the same percentage as Super Saiyan, which is a little weird canonically speaking, but it drains your health instead of your ki. I actually really like this system because it makes transformations feel more like a tool you use in specific situations rather than just a default mode that makes everything else feel like being hobbled, and it also feels kind of cool when you get blasted away and lose your transformation because you ran out of ki – just like they do in the show. Sometimes though, you’re locked in your transformed state because that’s just what the story calls for.

“Does the game feel like it’s just boring busywork till a cutscene, or do you feel engaged and actually involved in the world?” – @Forchy on Twitter

Once each of the arcs gets moving, there’s pretty constant engagement – for the most part. After every arc there’s an “intermission,” so to speak, where you’re able to tackle a bunch of sidequests you pick up from random NPCs, and this is where Kakarot starts to falter. The sidequests just aren’t good so far, neither in their stories nor in their gameplay, with the sole exception of one involving Yamcha and Puar that I won’t spoil here. But what’s nice about the Yamcha sidequest is that it deepens an already-established relationship between Puar and Yamcha through an angle that the show never touched. If more of the sidequests were like that instead a bunch of different variations of “I’m a chef, find me 5 carrots, 6 onions, and 10 fish scales, and I’ll make you food!” or “these jerks are making my life miserable! Punch them till they stop moving!” the open-world segments would be much better.

“Should I play the game even if I’ve never watched Dragon Ball? Will I still get enjoyment out of it without the anime?” – @BrantDean29 on Twitter

I think Dragon Ball Z: Kakarot is actually a pretty good gateway into Dragon Ball Z for people that have always been interested in the series but don’t want to watch 100+ episodes of something. It’s fairly comprehensive in its retelling of the Dragon Ball Z story, covering even frequently glossed-over parts, like Piccolo’s training of Gohan, and doesn’t shy away from long stretches of dialogue when no fighting’s going on. Fans will get the most out of it for sure, but this is definitely a solid way to experience DBZ’s story.

“How does the combat compare to the recent Xenoverse releases? Does it feel like a 3D brawler/fighting game, or is the combat more in the realm of an arpg?” – bigDSnack on IGN.com

My experience with the Xenoverse series is admittedly minimal, so I can’t speak to the nuanced differences and similarities between them and Kakarot, but they do feel very similar on the surface. In any case, Kakarot’s combat is definitely more along the lines of an arena fighter as opposed to an ARPG.

Also, are there outfit options? Obviously Goku would stay in his orange and blues for the majority of the series, but there were a few times he donned other clothes such as in capsule training or in some of the “filler” episodes. I.E. can I make him dress like a tourist or am I skipping this game?” – bigDSnack on IGN.com

Your character’s outfit is dictated by what’s happening in the story, and it doesn’t seem like there’s any option for customization. Vegeta gets his pink “Badman” shirt, but Piccolo doesn’t get his civilian costume during the driving test side mission, unfortunately.

“How much better would the game have been if it used Bruce Faulconer’s soundtrack?” – Holtic on IGN.com

The adult critic in me says “not much,” but the teenage DBZ fan in me that used to rush home from school every afternoon, run upstairs, and hurriedly flip through the channels to Cartoon Network to catch the final episodes of the Frieza arc on TV cries out “sooooo much betterrrrrrr.”

“For anyone already very familiar with all of the sagas from the anime do you think people would be bored with the game having to revisit the same exact stories or is there enough to keep people interested and worth a purchase?” – fastwolf83 on IGN.com

This is going to vary from person to person. As someone who is very familiar with all the sagas from the anime, but hasn’t actually watched them for quite a while, I enjoyed going through it all again. For me, it’s been very nostalgic, but I can totally see the perspective of fans that are sick of having the same story retold to them over and over again.

“Does it have RPG elements like unlocking attacks and leveling it up?

Can you use items mid fight? (potions for example)

Any sort of character customization like choosing a set of attacks?” – iesam on IGN.com

Yes, yes, and yes. I think I’ll save my breakdown of those systems though for the actual review, but in short, I think a lot of the RPG mechanics are a little convoluted in Kakarot and not entirely necessary.

I assume this is talking about Super Saiyan levels, but yeah, it’s based on story progression. There are various upgrades to each transformation, though, that are locked based on your character level. So for example, you can spend orbs that you find in the world to unlock Super Saiyan 1 level 2 once you reach level 50 with Goku.

“How much classic Dragon Ball stuff is in the game?” – KBABZ on IGN.com

A good amount, actually! Characters like Nam, Launch, Tao, and Eighter appear as characters that you can get sidequests from, and there are also collectible cards that you can find out in the world which unlock a screenshot from the original Dragon Ball anime along with a little bit of text contextualizing it. It’s pretty neat! I always loved stumbling upon one.

“Will you be able to turn off damage numbers?” – KakarotVegita on IGN.com

As far as I can tell, you cannot.

That’s all I have time for! Gotta get back to playing so I can finish this review early next week. Thanks everyone for the questions, and sorry if I missed yours. I’ll see you all on the next episode of Dragon Ball Z.

Mitchell Saltzman is an Editorial Producer at IGN and is currently working his way through Dragon Ball Z Kakarot for review. You can find him on Twitter @JurassicRabbit