The Samsung T7 Touch is the latest member of Samsung’s portable SSD family. Like the Samsung T5 before it, this titchy drive has a lovely, sleek aluminium chassis that’s roughly the same size as a couple of stacked credit cards. Only now it has a fancy fingerprint reader for extra security and supports the nippier USB 3.2 Gen 2 standard, leading to sequential read and write speeds that are almost twice as fast as its T5 predecessor. Is it necessarily a better buy than the best gaming SSD-grade T5, though? Here’s wot I think.

Available in 500GB, 1TB and 2TB sizes in either black or silver, the Samsung Portable T7 Touch (to give it its full and proper name) is by far one of the most attractive external SSDs I’ve ever laid eyes on. I mean, the T5 was already quite a looker, but the T7 Touch is bloody lovely. It’s an infinitely nicer thing than WD’s My Passport SSD, and I much prefer it to the similarly-sized but flimsy-feeling plastic casing of the Adata SC680 (a separate review of which will be coming shortly). It’s a lot smaller than Crucial’s X8, too (review also coming soon), and generally looks and feels like a proper premium bit of kit.

The Samsung T7 Touch does, however, cost a lot more, with the 500GB model coming in at an eye-watering £130, while the 1TB and 2TB models are set to cost £196 and £366 respectively when it launches at the end of January (US pricing TBC). There will also be a non-Touch version coming out in May, which supports the same USB 3.2 Gen 2 standard but ditches the fingerprint reader, but with no word from Samsung on how much that’s going to cost yet, it’s difficult to say how much cheaper it’s going to be as a result. 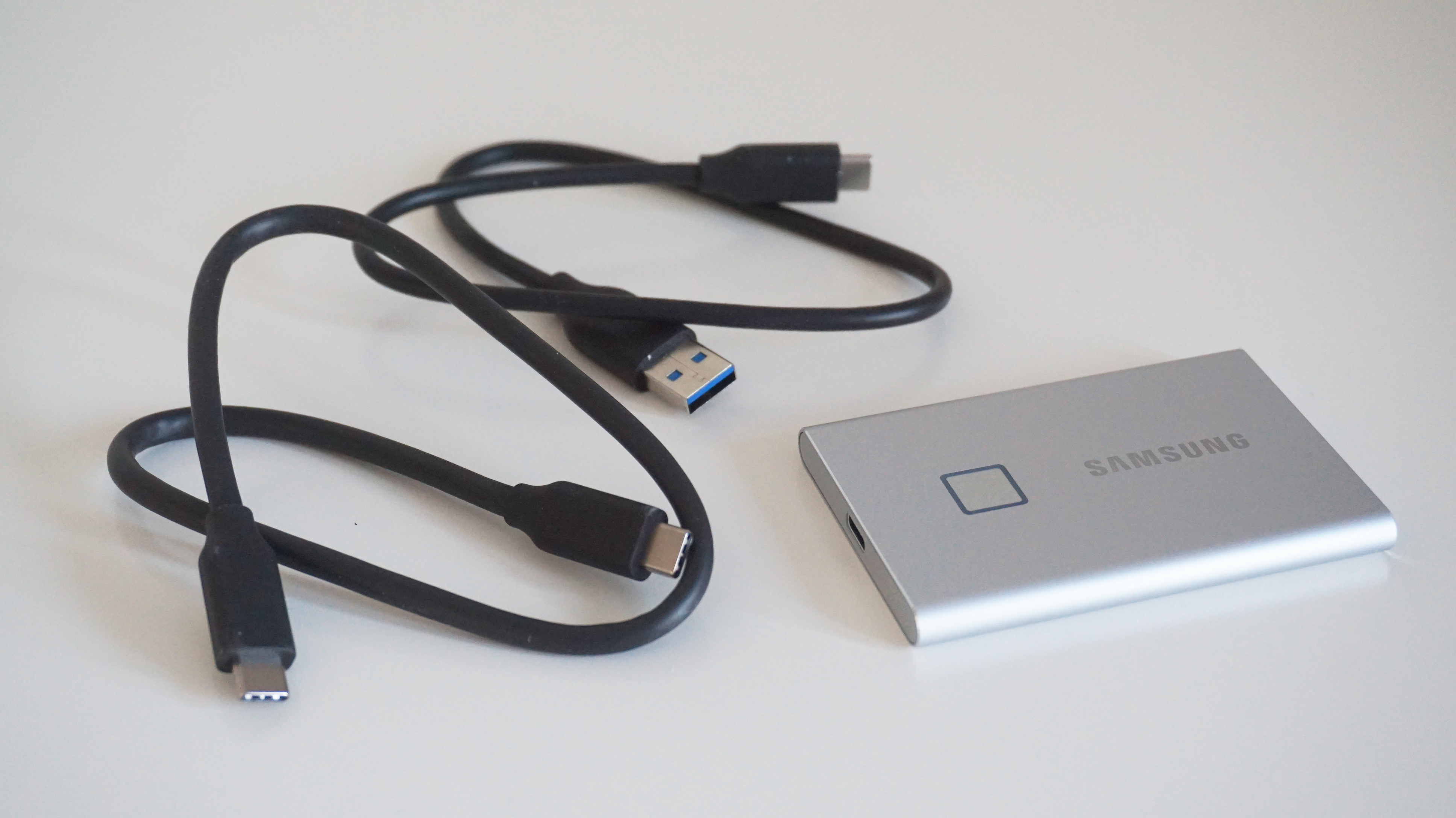 That said, even if you’re buying a new external SSD with a bit of future-proofing in mind, the T7 Touch is still considerably more expensive than its other USB 3.2 Gen 2 rivals. The Crucial X8, for example, will set you back £113 for its entry-level 500GB capacity and £155 for its top 1TB model. The Adata SC680, meanwhile, is even cheaper, available for just £72 for the top 480GB size. Can the Samsung T7 Touch really be worth all that extra money?

Unless you really want that fingerprint reader, I’d probably say not. I’ve yet to test the Crucial and Adata in full, but I’m not sure they’ll actually have that much difference on my overall verdict. You see, while the T7 Touch’s sequential speeds are indeed roughly twice as fast as Samsung’s T5, coming in at 866MB/s read and 856MB/s write over USB-C, its random read and write speeds left a lot to be desired. 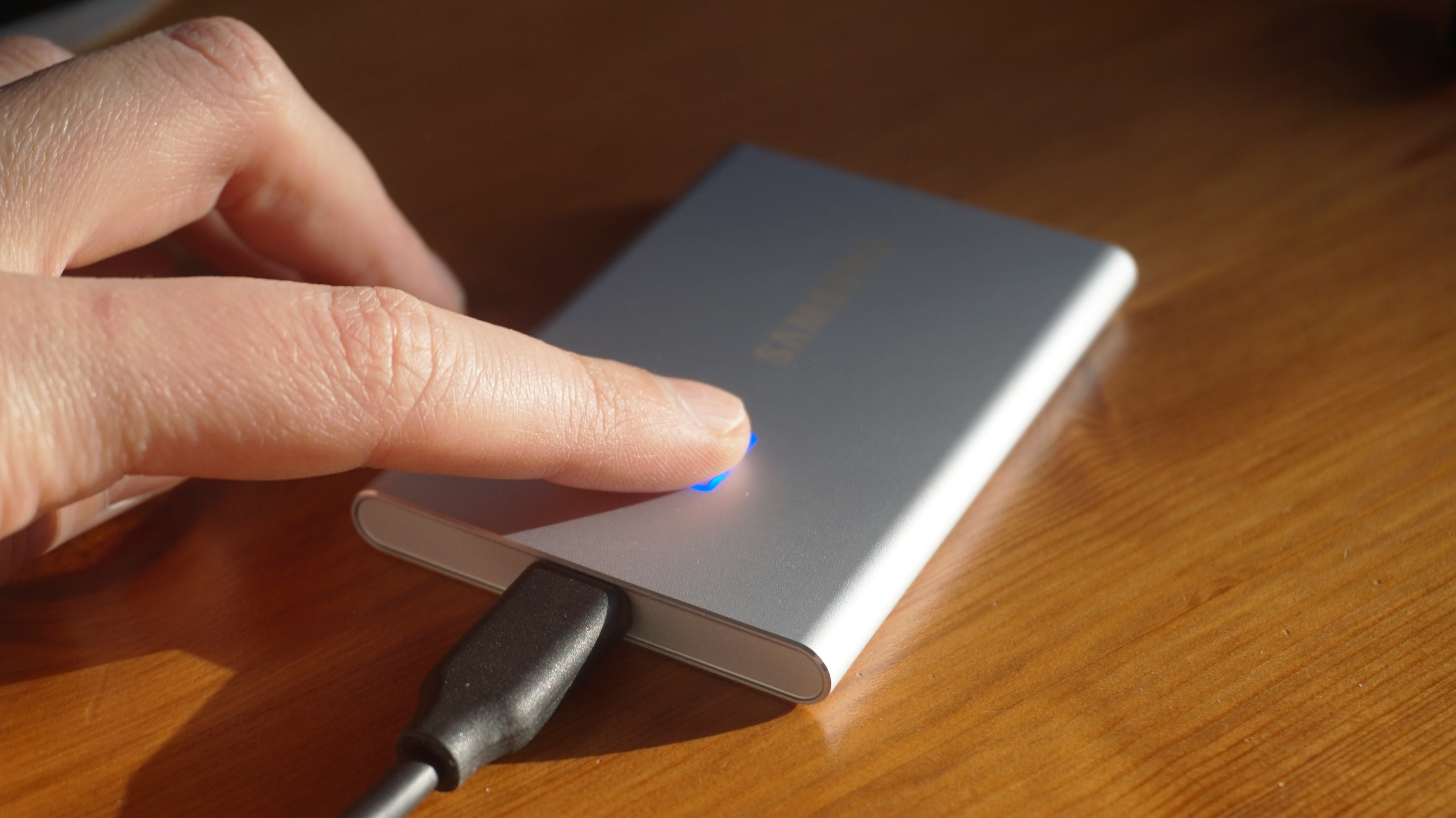 Here, the T7 Touch was pretty disappointing. Regardless of whether I used its bundled USB-C to USB 3 or USB-C to USB-C cable with my XPS 15 laptop, the results from AS SSD’s 1GB 4K random test were pretty much identical, coming in at a rather measly 17MB/s read and 37MB/s write. That’s actually a tad slower than my T5 speeds, which came in at 24MB/s read and 41MB/s write respectively.

The T7 Touch’s transfer speeds were a bit more promising, and switching over to its USB-C to USB-C cable did show a noticeable improvement over its USB3 speeds this time. To test this, I used AS SSD’s copy benchmark, which involves transferring three different file types from the OS onto the drive – an ISO folder consisting of two large files, a programs folder with lots of little files, and finally a game folder that’s made up of both big and small files.

Over USB3, the T7 Touch managed 326MB/s for the ISO, 121MB/s for the Program test, and 249MB/s for the Game, which is more or less in line with the results I have for the T5 and WD My Passport. However, switching over to USB-C saw those figures rise to 501MB/s, 128MB/s and 324MB/s respectively, putting it quite a way in front of its rivals. 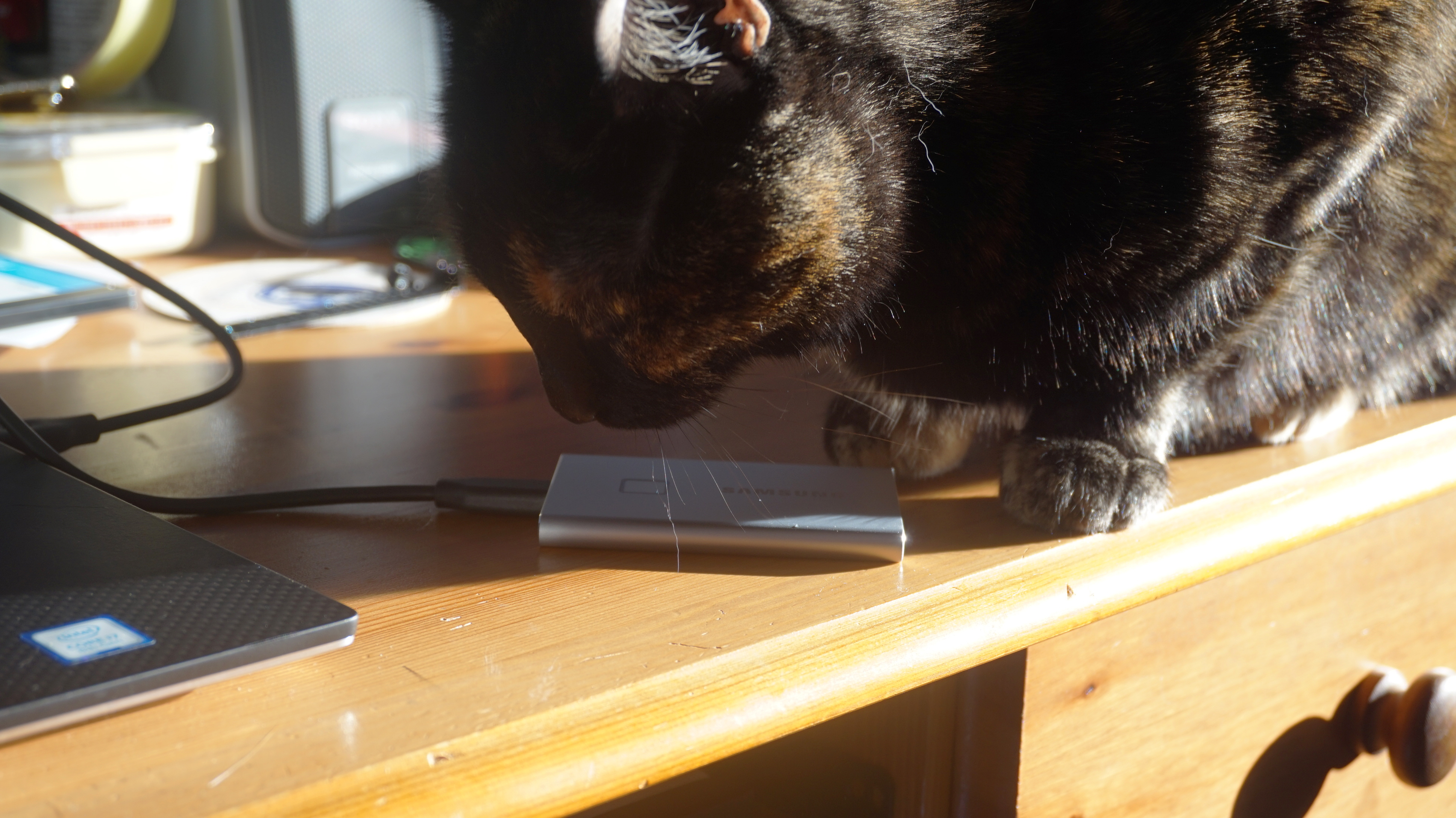 No cats are getting into this SSD…

However, the actual time you’ll save waiting for all that to happen isn’t actually as much as you’d think. If AS SSD’s timings are anything to go by, those faster transfer rates saved me… a second each in total. Yep. One measly second per test. Of course, those seconds may well stack up into eventual minutes depending on how many files you’ve moving, but it’s hardly the kind of saving that’s going to revolutionise your workload.

Then there’s the fingerprint reader. It worked, most of the time, but it’s nowhere near as fast and effortless as the fingerprint reader I have on my phone, for example. Instead, it opens the drive in read-only mode first (albeit with a handy little text file called “This is Read Only Partition” to let you know it’s not opened fully yet), and it often took a couple of seconds for it register my fingerprint and open it properly.

Sometimes, it just failed to recognise my fingerprint full stop, forcing me to enter the password I’d set before I could start using it, which, let’s face it, is way more hassle than it’s worth. Plus, Samsung’s SSD software would often fail to recognise the SSD was even attached to my laptop, even when I was able to open and browse the files in Windows’ File Explorer. These software kinks will hopefully be ironed out before release, but combined with its rather underwhelming random read and write speeds, it doesn’t exactly scream “good value”.

I’ll be writing up separate reviews of the Crucial X8 and Adata SC680 soon to see how they compare, but for now I’d be inclined to stick with the Samsung T5 as my external SSD of choice, as I’m not sure the T7 Touch really does enough to justify its higher price.