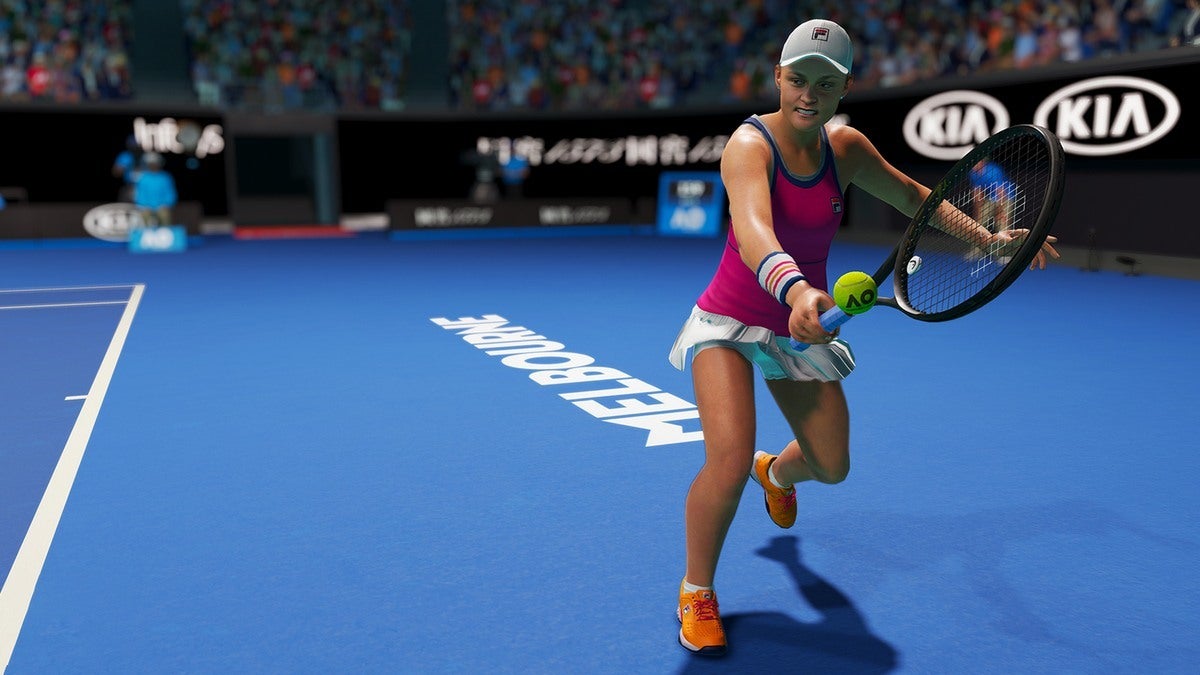 2018’s AO Tennis may have been a limp first swing that pinged off the frame and dropped well short of the net, but its second attempt at landing in the service box has been delivered with substantially more power and precision. It’s a better-looking, smoother-playing, and more fully-featured simulation of the sport, one that eradicates the bulk – though not the entirety – of the unforced errors made by its undercooked predecessor. There hasn’t been a transformation this radical in the tennis world since Andre Agassi took off his wig.

Many of these improvements have admittedly come over time; regular post-release patching from developer Big Ant transformed the original AO Tennis from broken mess at launch to a more competent sim some 12 months later, tightening the responsiveness of the controls and adding additional community-focussed features such as a powerful stadium designer. AO Tennis 2 builds upon that restructured foundation, smoothing the on-court experience further with a raft of new player animations and improved ball physics, along with bringing a welcome splash of personality and context to its career mode, a la FIFA’s The Journey.Despite the fact that the Australian Open is still the only major tournament it’s officially licensed, and its player roster still lacks a number of the big names from both the mens’ and womens’ tours, AO Tennis 2 feels substantially fleshed out at launch since it inherits two years’ worth of community-created content from the previous game. Thanks to the power of its player, logo and stadium customisation tools, not to mention the hard work of others, I was able to import reasonably convincing community-made recreations of unlicensed players like Andy Murray and Roger Federer, as well as entire stadium complexes based on Roland Garros and Wimbledon, modelled accurately right down to the courtside advertising signs.

These additional user-created players and stadiums bring diversity and realism to the multi-year spanning career mode, although it feels slightly restrictive that you can only import new players at the very beginning of a career. If you’re several years into your career and you spot an amazing user-created Serena Williams shared online, for example, you have to either restart your career if you want to import her or simply go without, which is annoying.

Still, I enjoyed the progression loop of the career mode, which involves completing training drills to raise your various skill level caps, entering tournaments to win prize money, and then investing that prize money either into increasing your player attributes or hiring support staff to give additional buffs to your stamina and the like. Although the story-driven cutscenes and interactive press conferences have clearly been made on a budget small enough to lace a pair of tennis shoes, they nonetheless do a serviceable job of breaking up the otherwise-static nature of menu management in between tournaments.

Out on the court, AO Tennis 2 provides an exciting and dynamic brand of tennis, for the most part. Individual player styles feel unique – Rafael Nadal is deadly from the baseline while big-serving John Isner is a force in all four corners of the court – and there’s a measurable difference in ball speed and bounce across the different playing surfaces, bringing a greater sense of strategy and variety to each tournament. There’s also a broad spectrum of difficulty modes on offer, with no fewer than eight to choose from; whether you want to drop it down to Rookie for a Virtua Tennis-style hit-and-giggle or ramp it up to Grand Slam for the stiffest possible challenge, options are there for you.

AO Tennis 2 provides an exciting and dynamic brand of tennis, for the most part.

That said, there remains an occasional unresponsiveness to the assisted movement scheme that left me feeling unnecessarily frustrated at least a handful of times in every match I played, even on the more modest difficulty settings. While there is a menu slider to adjust how much your player automatically moves to meet the ball, I could never find the absolute sweet spot. The more I played AO Tennis 2, the more adept I became with the timing required to swerve an aggressive topspin winner down the sideline or rush to the net to nail a sharply angled volley, yet I was never a hundred percent sure as to when my player would randomly abort an overhead smash or leisurely sidestep across the court when I wanted them to sprint flat-out or dive. Assisted movement certainly makes sense in AO Tennis 2 considering you’re controlling both the position of your player and the shot aiming reticule with the same thumbstick, but I feel like the existing system is just shy of being optimised to the point of being consistently reliable. Additionally, there were a handful of times where animation glitches helped AI players hit balls that were seemingly nowhere near them, which only furthered my frustration.These sporadic shortcomings never became enough of a hindrance to make me want to throw my controller, although I certainly McEnroe’d a lot of virtual racquets thanks to AO Tennis 2’s addictive reaction animations that can be triggered in between points. Giving a respectful wave of acknowledgement to the crowd or throwing a sarcastic thumbs up to the chair umpire provides some colour to each point that I appreciated in the absence of any in-game commentators, and it’s a nice touch that your behaviour on court directly influences your potential sponsorship deals in the career mode.

Your behaviour on court directly influences your potential sponsorship deals in the career mode.

Elsewhere, AO Tennis 2’s broadcast presentation has been enhanced with a number of match metrics that appear on screen, such as win-predictor percentages and time-pressure stats, and the option to challenge a line call returns from the previous game. Although from the perspective of the wide broadcast-style camera, deciding which close calls look in or out in your opponent’s half of the court seems like guesswork at best.