As well as a plentiful supply of new gaming monitors to coo over this week, this year’s CES tech bonanza has also brought us dozens of new gaming laptops, including the world’s most powerful 14in laptop, the Asus Zephyrus G14. But it’s not so much the G14’s souped up innards that have me all aflutter (although its 4th Gen AMD Ryzen CPU and RTX 2060 Max-Q combo is certainly enticing). Instead, it’s the laptop’s dinky proportions, which measure just 17.9mm thick and weigh in at a mere 1.6kg. That, and the fact it’s got a strange LED matrix display on the back of the lid can wink at strangers across the table from me.

This (thankfully) optional LED-encrusted lid won’t be to everyone’s tastes, of course, but if you’re the sort who likes to plaster their laptop in cool, arty-looking stickers, then the Asus ROG Zephyrus G14 could be right up your street. However, before you let out that inevitable groan of pointlessness I can hear brewing in your vocal cords, I will have you know that it’s not the rainbow coloured Skittle fest you might expect considering Asus’ long-standing obsession with multi-coloured lights. Dubbed the AniMe Matrix (AniMe, not anime, although you can certainly see it being used to portray the latter almost exclusively), this 1215-strong LED matrix will only ever emit a simple white light from the many dozens of pin prick-sized holes covering just over half of its white or black lid, making it quite possibly the most restrained use of LED lighting I’ve ever seen on any kind of Asus product.

It is, in a word, a baffling kind of feature to include on any kind laptop gaming or otherwise, and I must admit I was really quite flummoxed by it when I first saw it in the flesh. It seems to be yet another classic case of ‘we did it because we can’, but over the course of my demo session with it I did become increasingly fond of it. While I can’t see myself making much use of it, it does make a refreshing change from the usual ROG eye logo you normally get hogging the back of Asus gaming laptops. Plus, when the LED matrix is turned off the Zephyrus G14 could be mistaken for an ordinary everyday laptop, which, again, is a blessed relief from the usual school of try-hard gamer design. 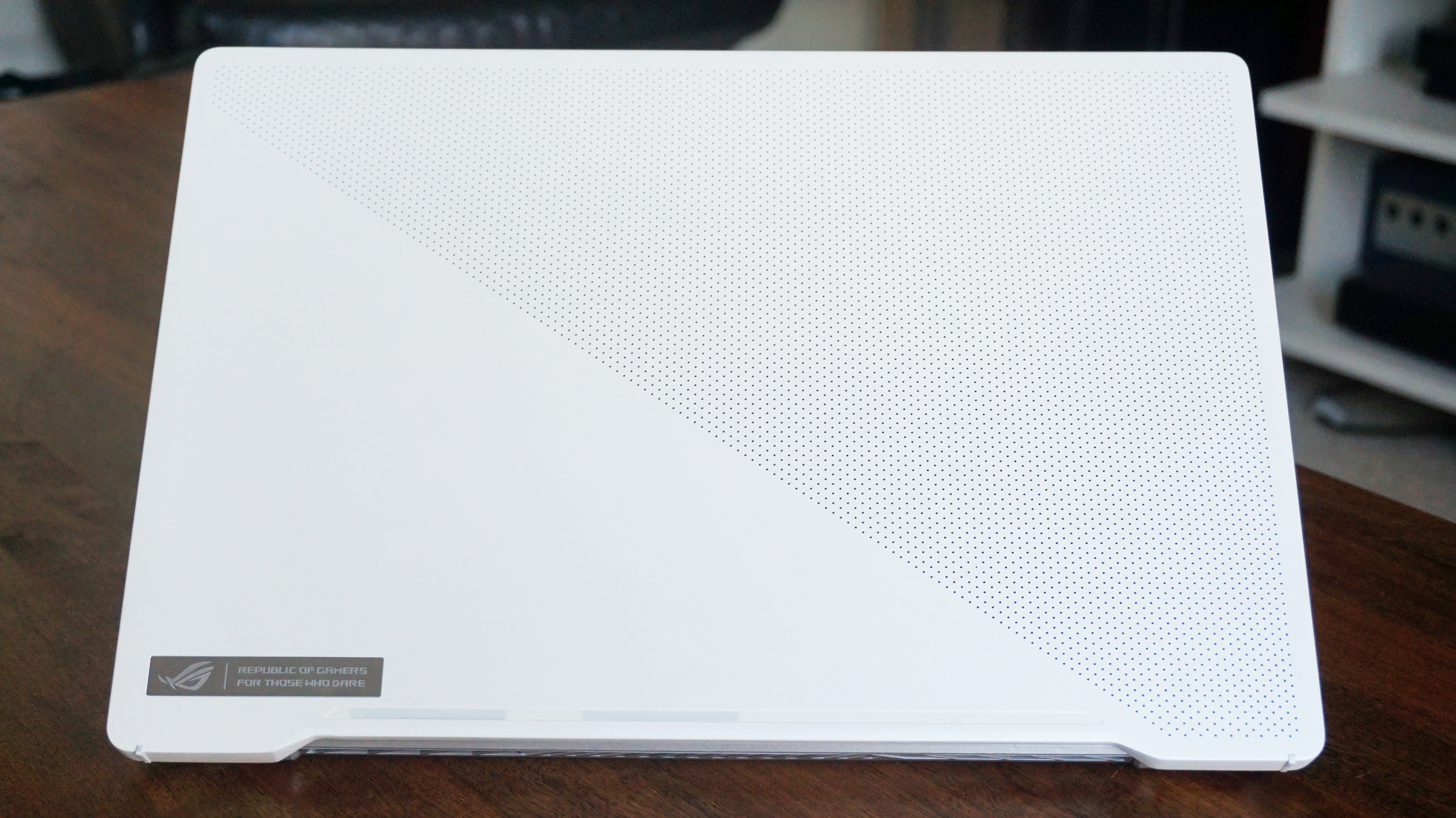 When the AniMe matrix is turned off, the Zephyrus G14 looks like a regular laptop, albeit with a nifty dot pattern covering half the lid.

As well as static images, the LED matrix will also be able to display imported GIFs or other graphics of your own concoction, and you’ll also be able to build your own frame-by-frame animations or have it react to whatever music you’re currently playing, giving fellow coffee shop goers their own silent disco to stare at. If all that sounds a bit too fanciful, though, you can also use it to display more sensible things such as email notifications, the date, time and battery level. Those, I can see being vaguely useful, especially if they work when the laptop’s shut and doesn’t drain too much of its 10-hour battery life during the day.

Still, even though there’s a large part of me that remains sceptical about its overall usefulness, I was nevertheless impressed by what it can do. For starters, there’s absolutely no light bleed across all the different pin holes you see on the lid (a feat that apparently took 15 iterations to perfect, according to Asus), and there’s enough differentiation between its 256 brightness levels to create legible images with lots of detail in them.

For the most part, though, the lid is likely going to be a take it or leave it feature. Instead, it’s the tiddly footprint of the Zephyrus G14 that has me most excited, as it falls exactly into the kind of size vs performance sweet spot I’ve been looking for ever since my beloved XPS 13 bit the dust at the end of 2018. That laptop was small and slim and perfect for travelling with, but its gaming chops were non-existent. Alas, Dell still hasn’t made an XPS 14 yet, so when it was time to finally get a new laptop I opted for their larger XPS 15. It’s a lot more powerful than my old XPS 13, boasting its own dedicated graphics chip for a teensy bit of gaming on the move, and it doesn’t feel quite so cramped when I’m typing. Over the course of a year, however, I’ve come to the conclusion that it’s really a bit too big and bulky to be lugging round events and trade shows for work all the time, and it’s an absolute killer on my old shoulders. 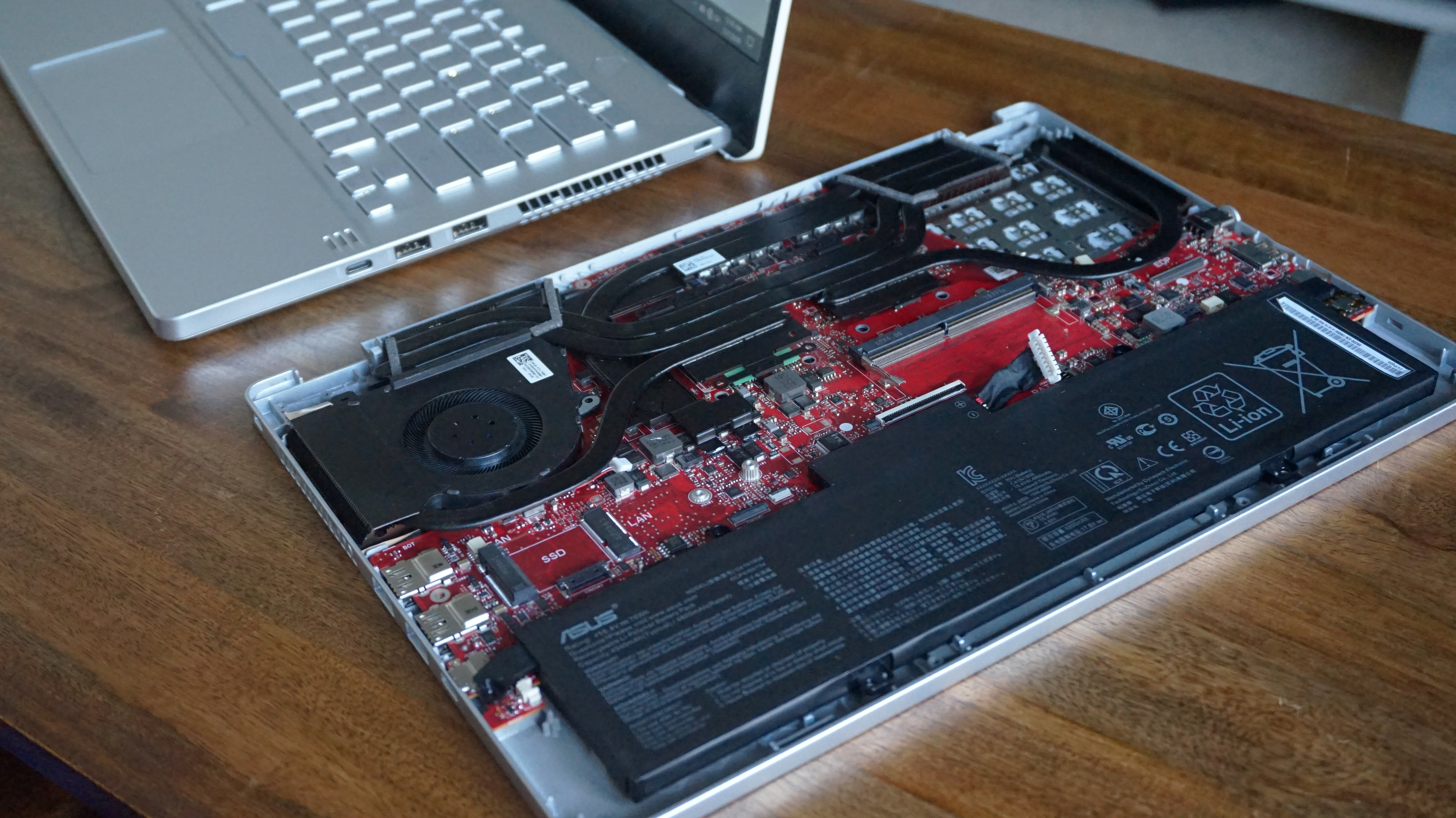 Here’s what the Zephyrus G14 looks like under the hood. To help keep it cool, Asus have designed a special dynamic cooling feature that adjusts how much power’s available to the CPU based on how hot the GPU gets, helping to ensure optimal performance at all times.

The Zephyrus G14, on the other hand, feels like it could be the perfect antidote to my XPS woes. While its chassis is roughly the same thickness as the 17mm XPS 15, its magnesium aluminium alloy chassis is noticeably lighter in the hands, making it easier to pop in a bag and carry around all day. The honeycomb structure inside its chassis makes it feel robust, too. I couldn’t detect any flex in the main body when I was lifting it up and down, for example, and even the lid felt noticeably firmer than other gaming laptops I’ve tested in the past thanks to the added presence of the LED matrix. Plus, it has a fingerprint resistant finish so it doesn’t get grubby the moment you take it out of the box. 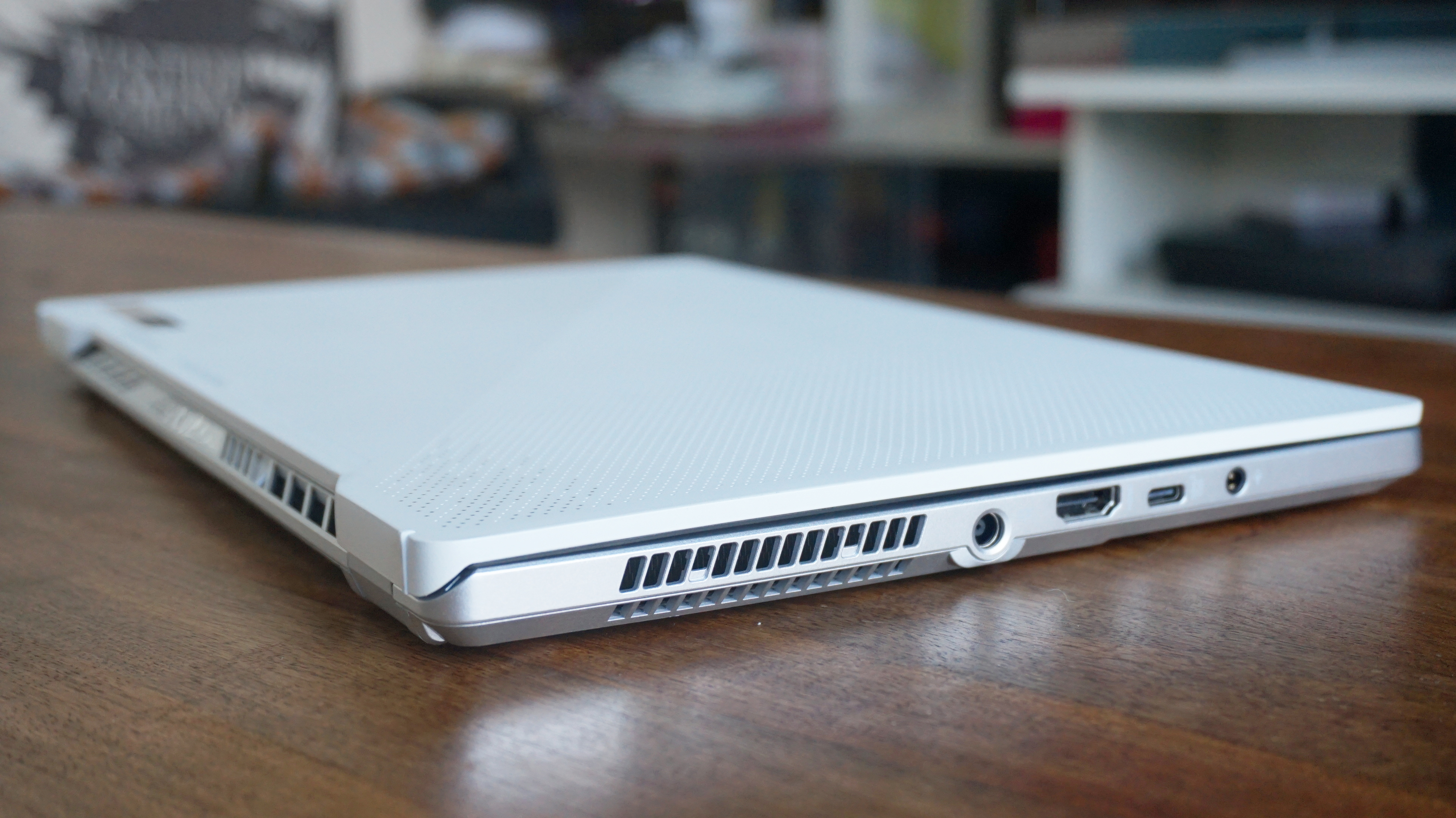 Regardless of which resolution or refresh rate you go for, though, every model comes with an IPS panel that’s been validated by the colour boffins over at Pantone to ensure top notch colour accuracy, with Asus claiming it should be able to cover a full 100% of the sRGB colour gamut. I’ll have to wait until review samples are available before I can see if that figure holds up in practice or not, but based on my own brief eyeballing of it, I can confirm it looks every bit like a high-end gaming laptop.

Unlike almost every other high-end gaming laptop out there, though, the G14 won’t force you to lug around a big fat power adapter all day if don’t want to. You’ll still need to make use of its 180W power brick if you want to play some games, but for the occasions when you’re just doing the odd bit of work out and about, the G14 also comes with a USB-C charger, allowing you to cut down on even more bulk when you’re on the move. That’s so damn generous and considerate for people like myself who regularly have to lug their laptop about with them for work, and I wish more laptops offered this kind of flexibility.

As well as USB-C, the Zephyrus G14 also comes with a decent selection of other ports and connections, including an HDMI 2.0b input for connecting it up to an external display, two regular USB 3.2 ports, a combined headphone and microphone jack and Wi-Fi 6 support (also known as the 802.11ax standard) for wireless speeds of up to 2.4Gbps when it’s connected to a compatible router. Its power button also doubles up as a fingerprint reader, and its lovely, tactile keyboard has N-key rollover support, too. 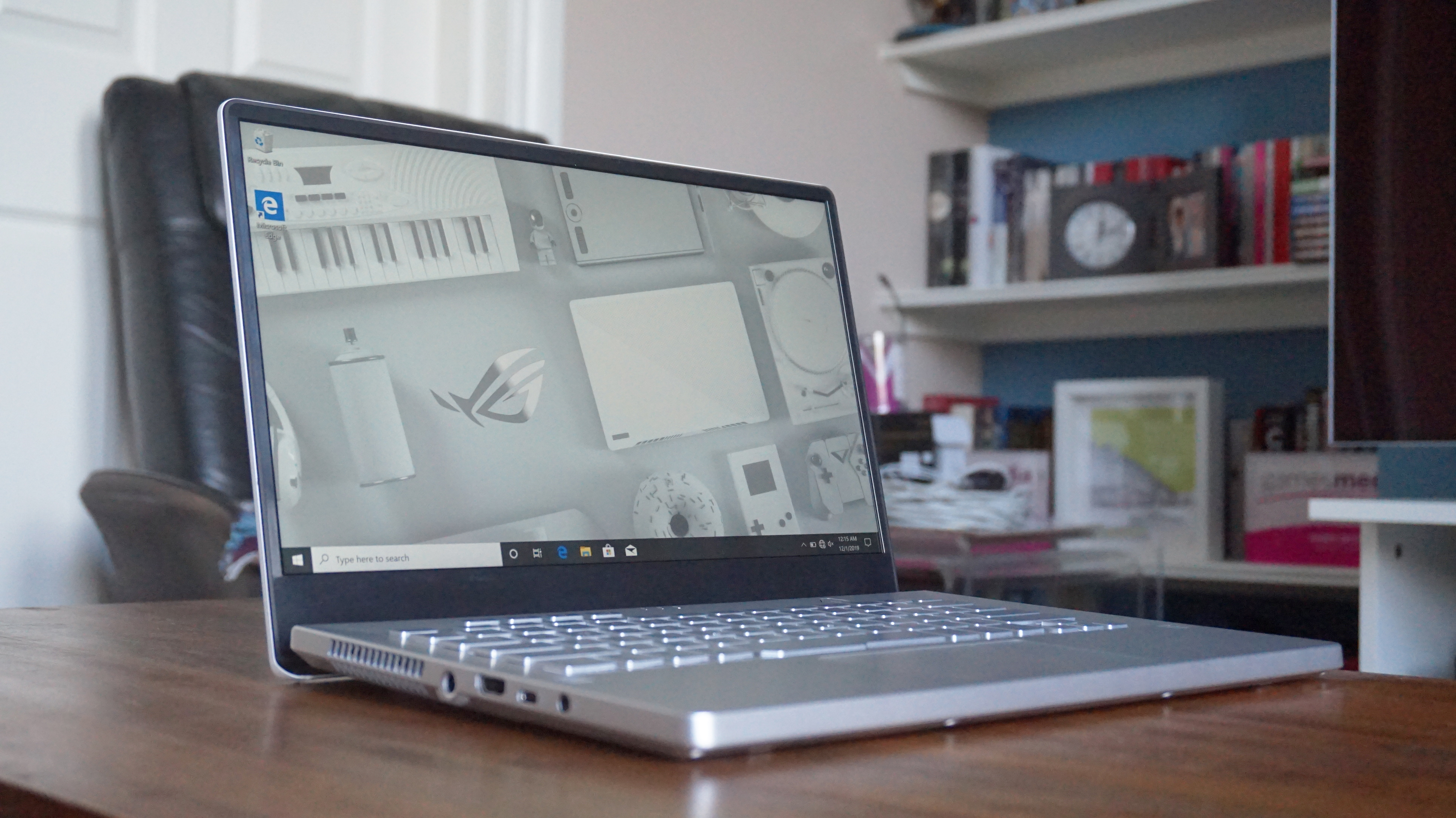 All in all, a very promising looking gaming laptop indeed. The only potential stumbling block, of course, is how much it’s going to cost. Asus haven’t given any indication on how much of a dent it’s going to make on our bank accounts just yet, but given their GTX 1660 Ti-powered Zephyrus G GA502 cost just over a grand when it came out last year, I wouldn’t be surprised if we were looking somewhere closer to the £1500-2000 / $1500-2000 mark for the entry-level 60Hz 1920×1080 model. Still, with a launch window set for sometime in late March, we hopefully won’t have to wait long to find out.

Either way, even if the Zephyrus G14 ends up being ludicrously expensive, I do hope this new kind of understated design makes its way onto other Asus gaming laptops in 2020, as I much prefer its plain black and silver (or just plain black) looks to the go-faster stripes and rainbow-coloured whizzbangs you get on a lot of other laptops these days. I just want a laptop that looks like a laptop. None of this cyberpunk stealthmobile nonsense that makes it look like it’s fallen out of the same hellish future where the Acer Thronos reigns supreme. I just want something simple that will let me carry on playing Outer Wilds while I’m away for work and won’t instantly make me feel embarrassed as soon as I take it out of my bag – and right now, the Asus ROG Zephyrus G14 looks like it could be just the ticket – provided its LED matrix doesn’t come pre-loaded with a winking anime ROG eye on it, of course. Because that would be weird.