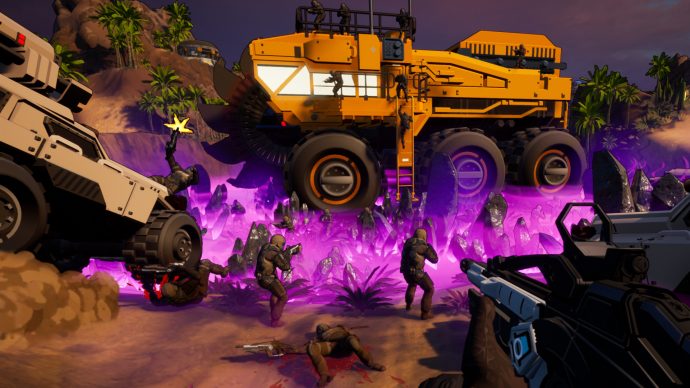 What if RTS but you ditched the omniscient perspective for the humble vantage of a single unit? That’s part of the pitch for Earthbreakers, recently announced by Petroglyph. The Grey Goo studio are tossing a hefty helping of first-person action into a pot of already simmering resource collection and tactical building. They’re hoping the result “combines the most enjoyable elements of FPS and RTS”.

Two teams skirmish over both territory and a brilliant violet resource called Vilothyte, which is used to build fortifications, structures, and most everything else. Your choice of class determines your loadout, which will likely adjust your role within the harried dash to victory by way of destroying the enemy team’s base.

In the above trailer, several players were escorting a massive excavator to a crop of those glowing crystals when a tank and some soldiers rolled onto the scene. The ensuing fight was one of protection, allowing the team that arrived first the time to scrape as much together as possible before getting the hell out. Upgrades and unit production were handled via consoles inside the workshop, which birthed a tank that immediately trundled into motion.

RTS players aren’t strangers to the possibility of violence cropping up anywhere inside bases or along production routes. But playing as the zerglings streaming through the cracks in defenses sounds fairly intriguing. Depending on map size, online games will reportedly handle up to 32 players. I’m already wondering if this could be a game that introduces my tactics friends to my rooty tooty shooty boys. I can’t imagine they’ll work well together, but it’s bound to be some delicious chaos.

Earthbreakers is coming to Steam in 2020.