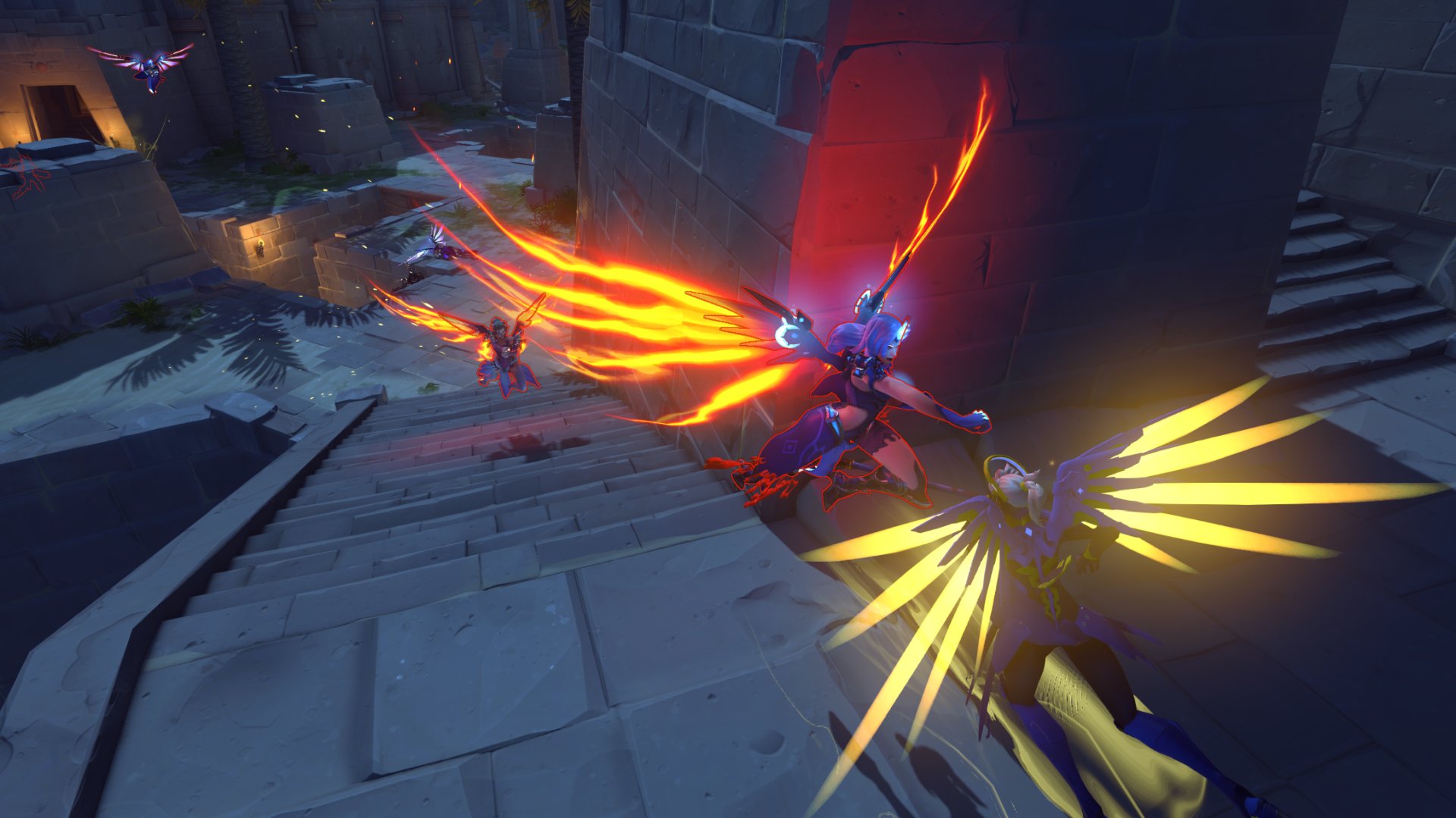 All my years of muscle memory are gone. Overwatch‘s custom games tab, where hero powers are traded furtively in dingy dens and game balance lies dead in the corner, has stripped them out. With the introduction of Overwatch’s workshop, players are able to make wild game-modes with the official tools, and share them with ease. I’ve fought an entire enemy team grafted onto Doomfist. I’ve seen a team of Mercies gliding in formation, aiming to beat me to death. And worst of all a game with, like, six Bastions. Overwatch 2 could likely learn something.

Overwatch game modes are shared with a simple five-letter code. They’re not always easy to find, but if you find a place that keeps the codes updated, like Workshop Codes, it’s best to get it from there. That way you’ll get the latest version from the creator. All the modes are player hosted, which means they aren’t always live in the browser, but you can always host one. 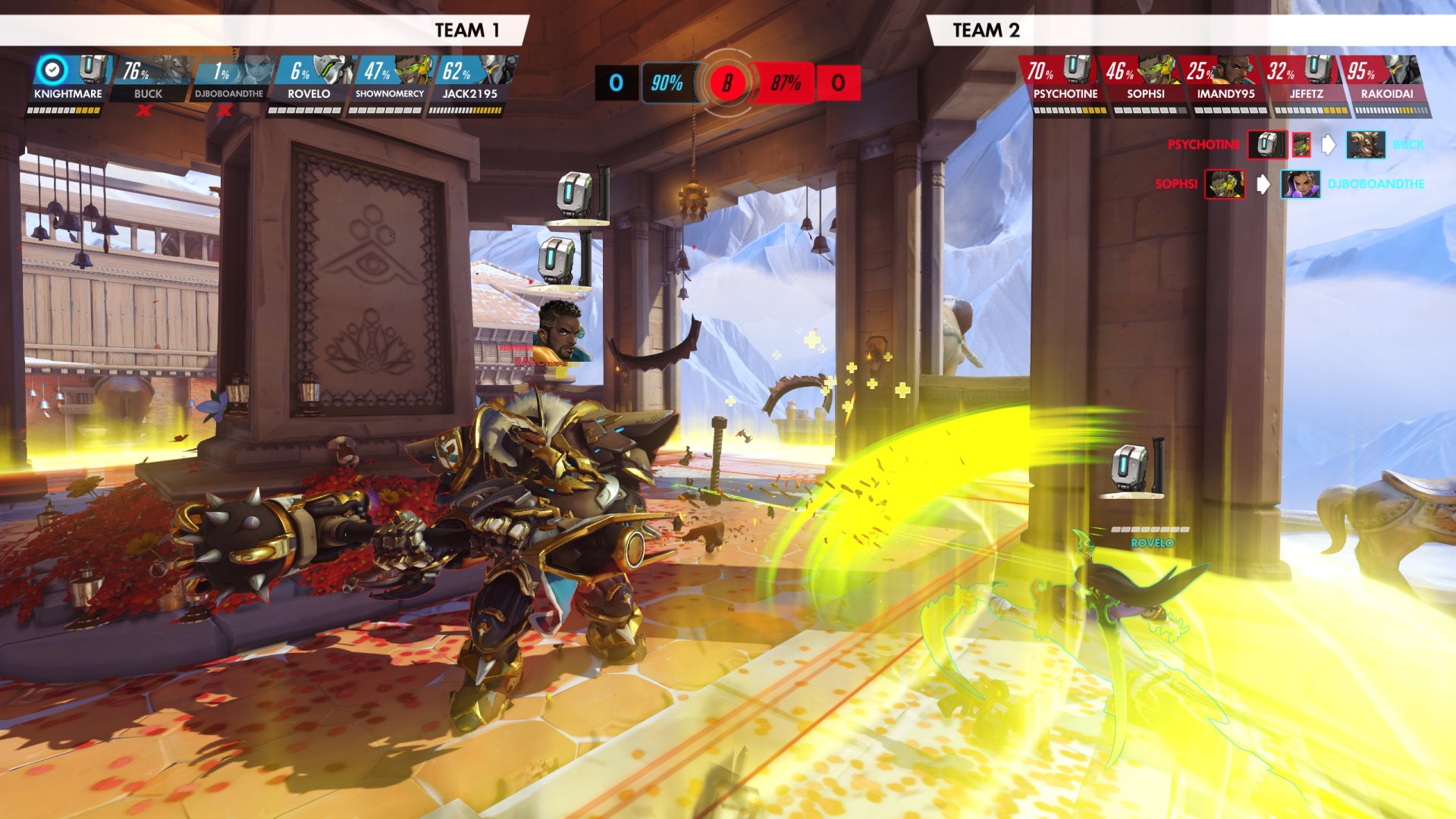 The set-up is normal: two teams on the map, one defending capture points and one attacking, and all the player powers are present and correct. But players can merge together, grafting invisibly onto friendly teammates. You generally give up control of where you go if you choose to join with another player, as the base player retains that. Those characters with movement-based powers can still use those until their host decides they’ve had enough with all that bloody blinking from the Tracer on their back.

But you can aim and shoot independently of the base character, and there’s no limit to how many can inhabit a single body. First I went Mei, and glommed onto a Reinhart, giving him the power to spray out her freezing death spew as he still held his shield. You might think there’s no counter to such a thing, and that we were being unfair. Well, “fair” is an alien concept in the Overwatch workshop. We were up against a Doomfist that could spit out Symmetra’s turrets, dashing powerfully into us and then dropping them all around. It forced me to focus on the troublesome lasers, which enabled other heroes to join the MegaDoom. He took on an Ana and a Bastion, their icons towering over his head like an evil hat. We had back up from a Reaper with a Tracer chaser fighting beside us, but the tower of Doomfist was too much. We only saw one player capping the point, but the game was told us there were five.

Hero Merging is an absolute mess, but it’s fun as hell. Here’s how to host. 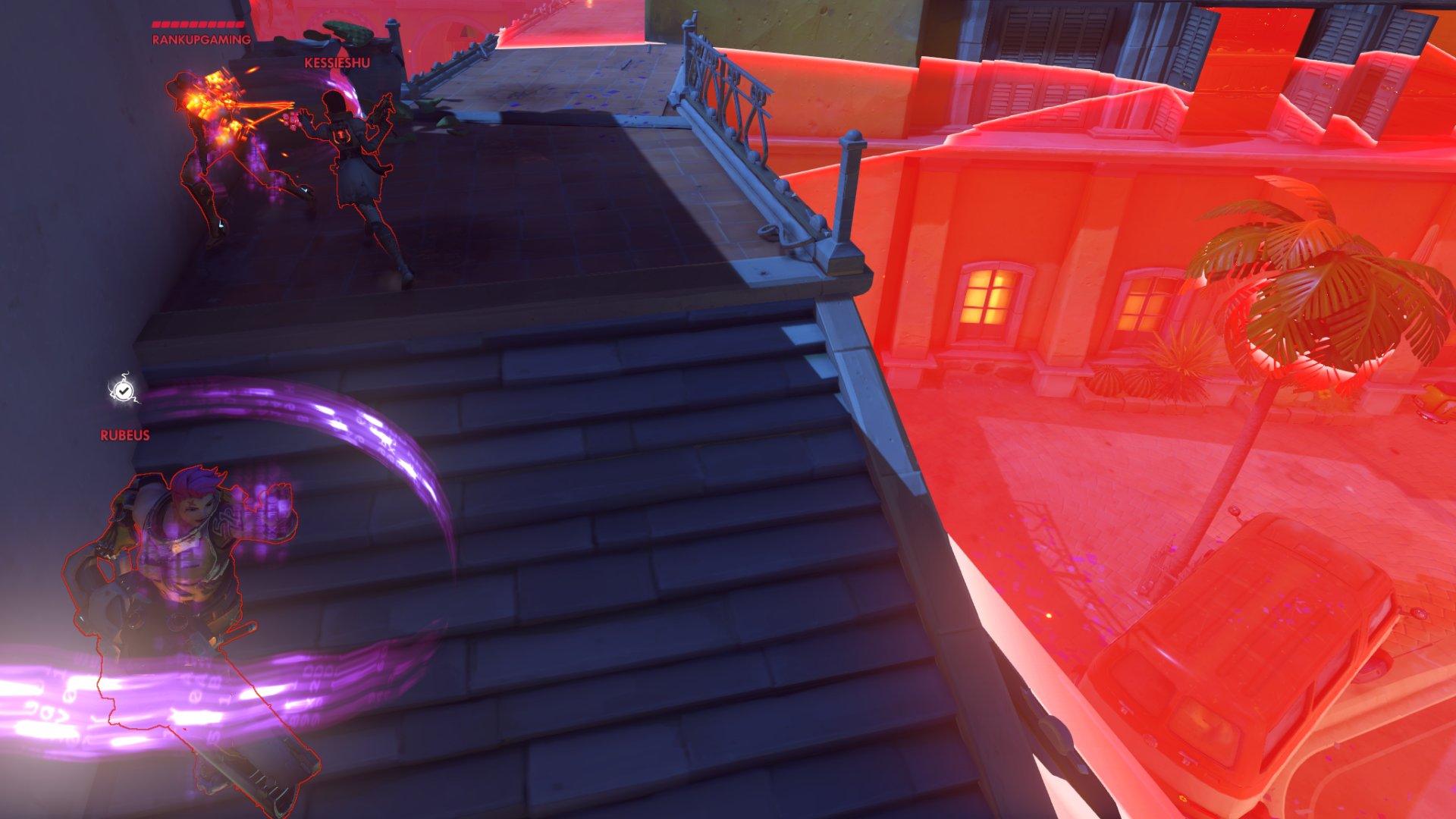 Rising globes of lava start pushing up from the ground, slowly merging across the level, forcing players to higher ground. It’s a simple concept that everyone from Krakatoa to Hawaii understands. Each character has a different method of pushing and moving, so Overwatch’s rooftops and bridges become little islands of intense poking between confused heroes.

I never quite got the measure of how the various heroes powers were changed (you can’t shoot as McCree, but you have a huge jump and your stun still works), but I did score an awesome Play of the Game with Roadhog’s ultimate. The Whole Hug has a pushback that I drilled into a line of opponents, and with the exaggerated blast, they were fired across the level right into a deep dome of death.

And as cool as that was, trapping someone with Junkrat’s Steel Trap and watching them drown in the bubble of death was even better.

The host code is here. 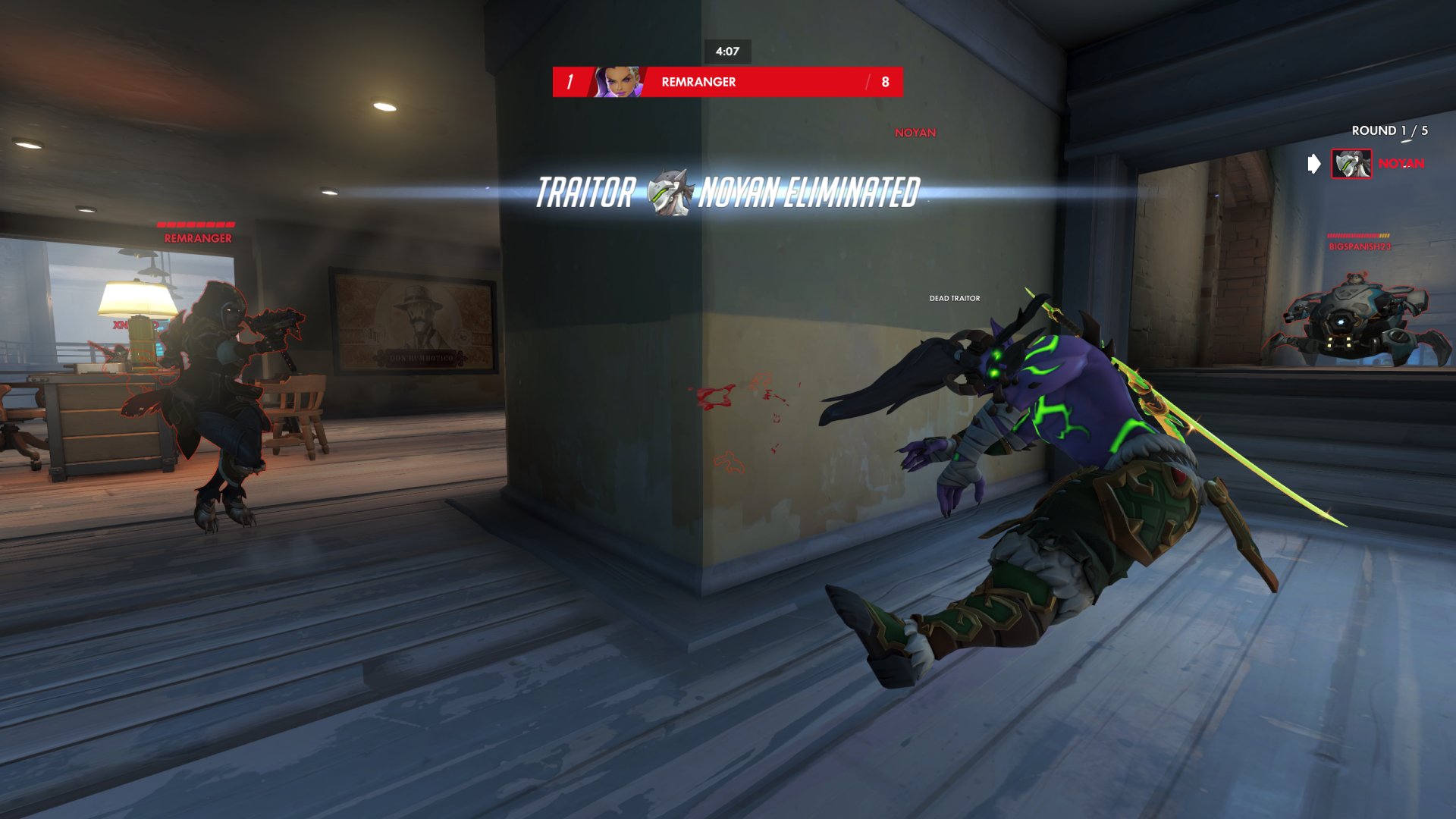 “J’Accuse Bastion!” This is Overwatch’s custom version of Trouble in Terrorist Town, where 25% of the spawned in players are secretly Traitors who’ll attempt to kill Innocents while avoiding being caught by Hunters.

There are a few new powers: Traitors can turn invisible in order to sneak around and have group comms to coordinate, and Hunters can see them if they crouch. But it’s not about the powers. It’s about…

Me, an innocent McCree, moseying about in the warehouse area of Havana, after being sacked from Red Dead Redemption 2 for calling Dutch a blowhard. There’s a Reaper constantly fretting about me. Does he suspect me? Is he going to kill me? I walk away from him, backwards for a few seconds because I’m not an idiot, before swirling and glancing around. Oh no! There’s a dead Mercy on the ground and a Symmetra with a sparkling aura. The aura tells me she’s been accused of being a traitor by the dead Mercy (attacked by her) and is now safe. So I know at least one person that I can – wait, where the hell did Reaper go? Oh, great! Now Symmetra is fretting over me as we’re all alone. But I approach her, better to be near her than alone in this terrifying world, and as she’s scanning around the rest of the level I punch her in the back of the head. Aha! I was the traitor all along. Eat it, losers.

All this is more exhausting than the second-to-second shootybangs of a normal game of Overwatch, but it’s satisfying and kinda dark as well.

Here are the full rules and how to host. 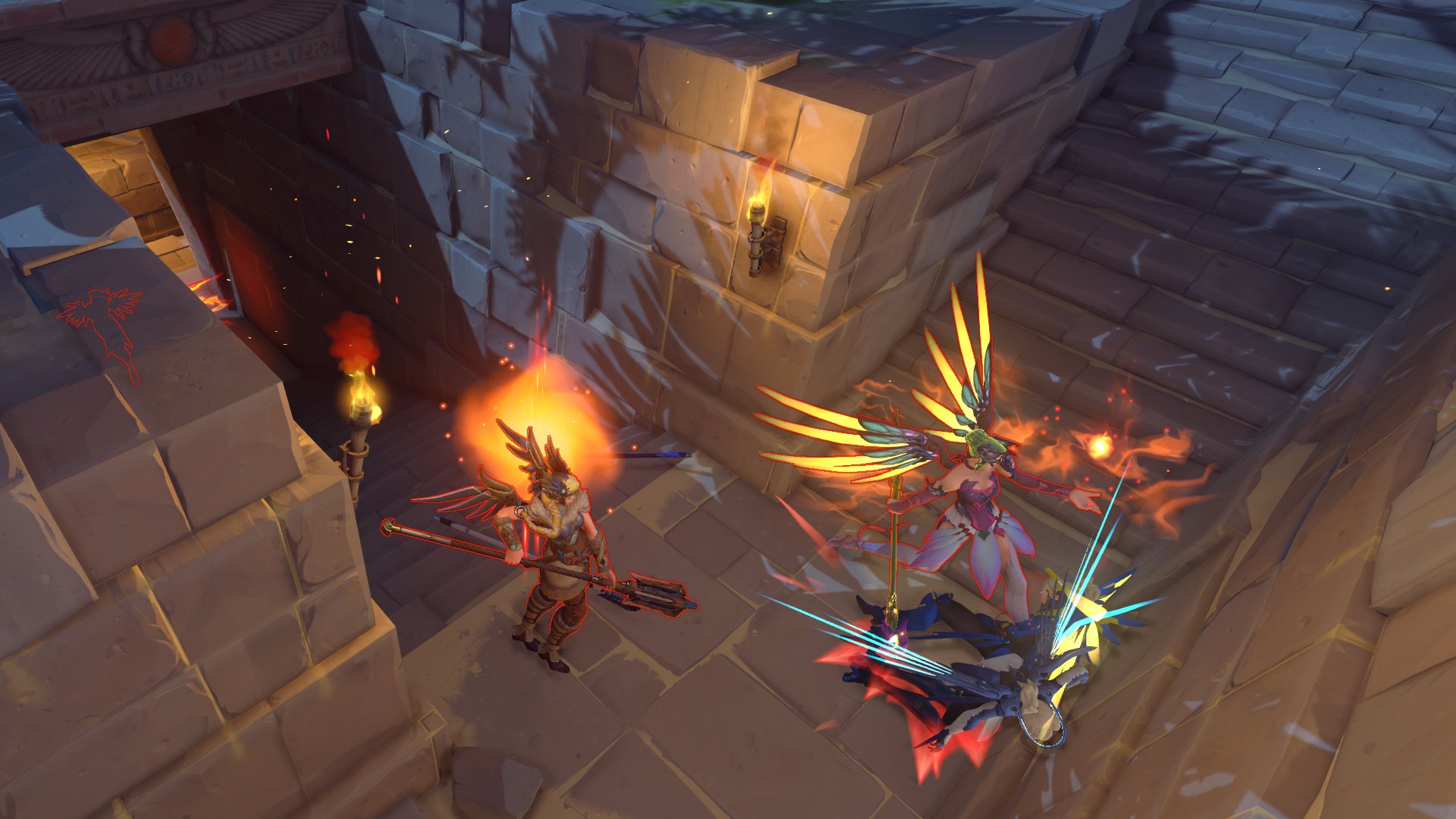 This is not a game mode to play if you are in any way bothered by Mercy. Everyone is Mercy and they’re all committing extreme violations of the Hippocratic Oath.

It’s a team-based deathmatch mode. You can float and boost, but the only offensive weapon you possess is a punch. It’s hectic, with fists and wings flapping all around. Swiftly swooping angels make tough opponents to land a right-hook on, especially if you have a low number of hours with her in the first place. It’s a mode designed to enable all Mercies to get out all of their aggression.

But whatever you do don’t join it as a spectator. The matches I watched ended up horrendously imbalanced, often leaving one terrified Mercy at the, er, mercy, of a whole team. It’s like something out of a Clockwork Orange, seeing them converge in their white, glowing outfits and leaving behind a crumpled angel.

This is a mode that’s tough to find, so just search for “Mercy” in the browser’s search bar and if one is live it’ll pop up. 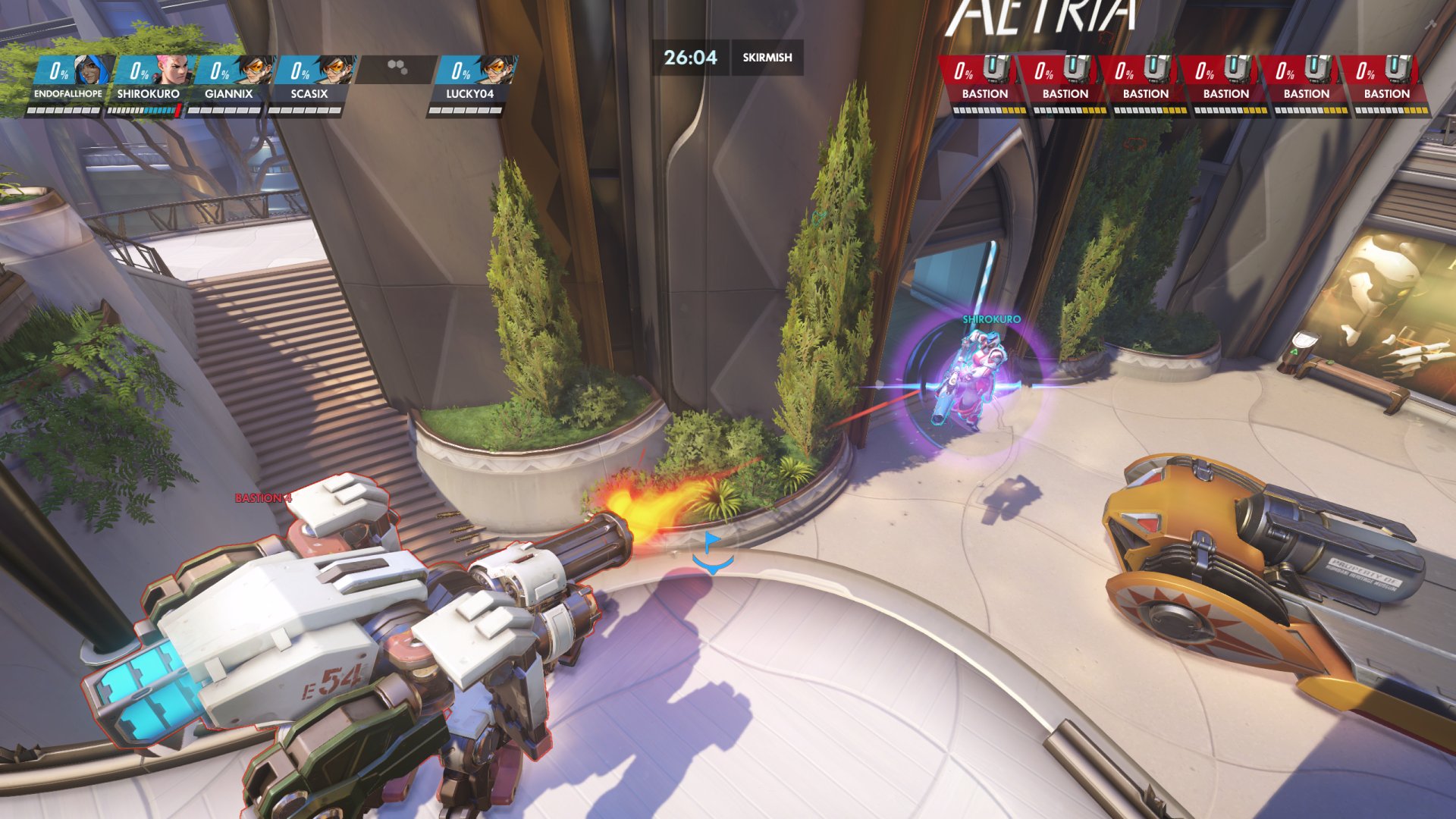 Oh god, no, noooooooo! But also, yes! You’re spawned into a level and assigned a hero. The goal is to get to the flag at the end of the level. Along the route are static, AI Bastions with a brutal aim. You start out with Sombra, so you can poke around invisibly on your first run through. It’s easy enough to unlock Tracer, the next character up, and things start getting a lot trickier.

As Tracer, you’re using her dash to lerp between the safe spots of Bastion’s gaze. Being imprecise is ok as long as you’re able to move quickly into cover. She’s weak, so even a graze can be enough to wreck you all the way back to spawn.

It’s not a solo mode and the presence of other players can help or hinder your progress, but a collective sense of survival always seems to form amongst the players. I had a Reinhart standing between me and blast of bullets without my begging for help, god bless his giant Germanic heart. Baptistes leaving trails of immortality fields are truly wonderful human beings.

With every complete run, you unlock a new character to try out, which helps you work out a whole new set of movement muscles. Overwatch feels like it was built for this, as each character has a way of making it past. Tracer blinks, Ana self-heals. It’s a real treat to spectate and see how players deal with the challenges.

This is the latest code I’ve found to run it.

Of course, this isn’t all. There are parkour maps, modes where you flee the sun, and cute little Lucio get-togethers where the only aim is to wall-run for fun. I’m as guilty as anyone for keeping to my standard Overwatch preferences, but just a little bit of poking opened up a fascinating world. Give it a go!