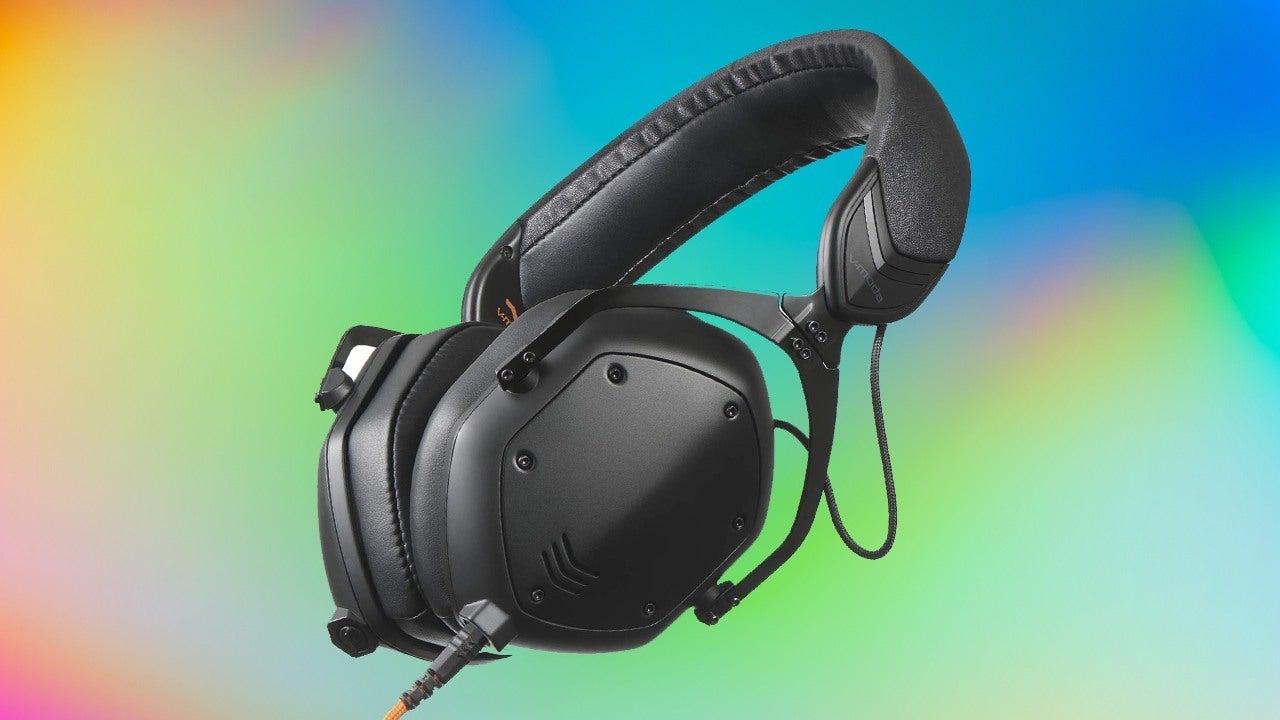 A gaming headset isn’t always the best audio solution just because you like to play video games. If you play single-player games exclusively or just prefer not to chat, a good pair of headphones can give you amazing sound and save you a little money by dropping the microphone. Case in point: V-Moda’s newest headphones, the Crossfade M-100 Master (see it on Amazon), cost as much as a high-end gaming headset, but offer superior sound in every pitch range. Comfortable and well-built, they’re great as an all-around option to keep next to a gaming PC or to bring with you on your commute as a pair of everyday headphones.

The Crossfade M-100 Master are extremely sturdy, well-constructed headphones. The top band features a metal frame, and the cans are connected to the band using sharp, angular metal arms. The adjustable arms slide with a satisfying click when you move them, and feel as if they’re meant to endure many, many quick adjustments. After weeks of putting them on headrests, dangling them around my neck, and a few twist tests, they maintain their shape and swaddle my head just as well as the day I took them out of the box. Despite all that metal, they’re surprisingly light. At 283g, the Crossfade M-100 Master is lighter compared to most of gaming headsets.

They’re also quite comfortable. The padding on both the top band and ear cups is quite plush and lined with vegan leather, which is both soft to touch and fairly sweat-resistant. It’s a good thing, too. The cans lock tight around your head when you put them on — tight enough that you wouldn’t ever forget you’re wearing them — but it’s a comfortable fit and stays that way even after long listening and/or gameplay sessions.

All that metal and leather definitely creates a distinctive “batman head armor” look. You can always spot a pair of V-Moda headphones (or a knockoff) thanks to the metal plates on the outside of the cans. The black metal plates on the Crossfade M-100 Master are pretty low-key, but still draw your eye — they look much different than most of the rounded wireless headphones you see people carrying around. If low-key doesn’t speak to you, the plates are customizable: You can swap out the black ones that come with the headphones for new ones you purchase from V-Moda, including custom engraving and 3D-printed models made of platinum and gold. Be warned, though: Custom plates cost extra and can get very expensive.

The most important feature of the headphones is, of course, what’s in those cans. The Crossfade M-100 Master uses 50mm dual-diaphragm drivers, which provide a wide range of clear, nuanced sound. The headphones have been rated by the Japan Audio Society for “Hi-Res Audio,” which theoretically means they are capable of playing high-fidelity audio files without any compression or loss of quality. That doesn’t mean a whole lot for most gamers (unless you’re also an audiophile), but you can expect to hear every little detail of every sound, no matter the pitch.

Realistically, by picking a nice pair of headphones over a gaming headset to pair with your PC and/or consoles, you should be looking to gain better audio fidelity in exchange for losing the convenience of a built-in microphone. Technically, you can get the full headset experience by adding V-Moda’s BoomPro Microphone, an audio cable with a built-in omnidirectional boom mic, but that optional add-on will run you an extra $30.

The only other distinctive feature on the Crossfade M-100 Master — besides sounding great — is the fact that there are audio jacks on both cans, allowing you to choose which side you want the cord to run from, which is convenient if you plan to keep these next to a desktop PC that’s already resting on one side or another or have another specific, non-typical setup and need the flexibility.

Also, while they aren’t especially distinct, I appreciated that the headset comes with a few extra accessories that give you freedom to customize your audio setup right out of the box, including a 1/4” audio adapter, cables with and without an inline remote, and a “shareplay” cable for connecting two headsets to a single device.

It also comes with a carrying case, which I wasn’t so excited about. The plastic “exoskeleton” shell is compact and tough enough to keep your headphones snug and safe in a bag or… attached to it via the included carabiner. (Please don’t do this). However, the inside does not have any pockets to store your cables: There’s are elastic bands inside either side of the case meant to hold your cords in place, but they aren’t as secure as the headphones and tend to unfurl. It’s worth noting that the cables come with small velcro bands to keep them bundled, but since most people will either quickly lose one or them away, it’s worth noting that you need to wrap the cables very tight to make them small enough to fit.

Even though it’s an optional accessory, we should also talk about the BoomPro mic accessory. For an optional attachment, the sound quality of the BoomPro, which is an omnidriectional boom attached to your audio cable via a flexible wire, comes in clear and is a respectable alternative to most headset mics. I found there to be some issues with the mic moving around because it’s attached to a cable, but you can keep it to a minimum if you use the attached plastic clip to keep the cable steady and close to your body. It’s definitely a compromise—using it isn’t as thoughtless as using a headset mic—but it’ll let you chat when you need to.

I find that most headsets, good or bad, tend to push out extra base to emphasize bullets, explosions, and all the good stuff in games. This is great when you want to feel a big booming base in your headphones, but often leaves something to be desired the rest of the time. The M-100 Master doesn’t really create that overwhelming boom feeling, but the sound comes through clean. That isn’t a huge deal when a bomb goes off, but it’s the difference seem much more valuable Raiden yells in a booming voice during a cutscene in Mortal Kombat 11.

In both music and games, the Crossfade M-100 Master pumps out dynamic and detailed sound

In mid- and high-range tones, you’re getting very crisp sound. In a game like The Division 2, you can not only hear bullets whizzing by, but also hear the ping when it hits the metal plate next to your head. In Wolfenstein: Youngblood, the crackling of a laser beam — a satisfying sound no matter what gear you’re using—has so much more texture. It’s like you can hear the heat.

When listening to music or podcasts, I also appreciate the detail and texture of the sound. From Billie Eilish to The Beatles, every voice, every instrument, every effect sounds as bright, as sweet, as soulful as its meant to.