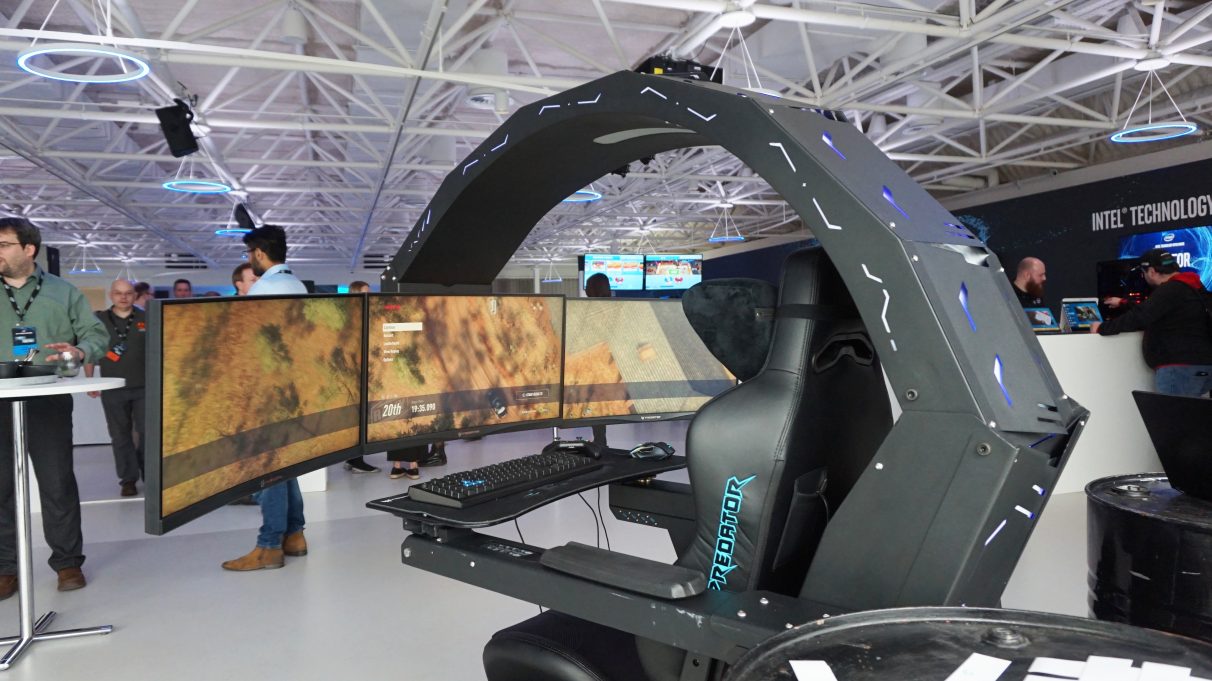 I wish I was joking about the Acer Thronos, but this hulking all-in-one gaming-chair-come-war-machine absolutely terrifies me. I know gaming chairs are all the rage right now. Heck, you, reader, might even be sitting in one right now. But this is something else. It looks like a legit naval gun turret with a malign consciousness, and it fills me with terrible dread.

Yes, its trio of 144Hz Nvidia G-Sync monitors are rather lovely, and yes, its reclining, haptic-feedback-enabled seat does make it feel like I’m floating in a giant sphere of pixels where the only thing that matters is more and more frames per second. But I’m not falling for it. One day, its mechanised keyboard tray will lock into place like a rollercoaster bar, trapping me inside its glowing LED “Scorpion Arch” (yes, really), and I will slowly be absorbed into its cold metal heart. Forget Thanos when it comes to big, mad titans. It’s Thronos you should be worrying about.

Thankfully, I was able to escape from my demo session before the assimilation process could begin. Probably because the machine-beast knew it was being watched by its two Acer handlers. Still, the thing’s a Black Mirror episode waiting to happen, I’m sure of it.

Even so, probably the least realistic part of said episode would not be the sentient chair itself, but the conceit that anyone would be able to afford it. At £25,000 / $30,000, it’s more expensive than a fairly good car, and requires a palatial space to handle its 324kg weight and 8x8x8ft footprint. Imagine it, the size of two steel gorillas, dominating the average home office. 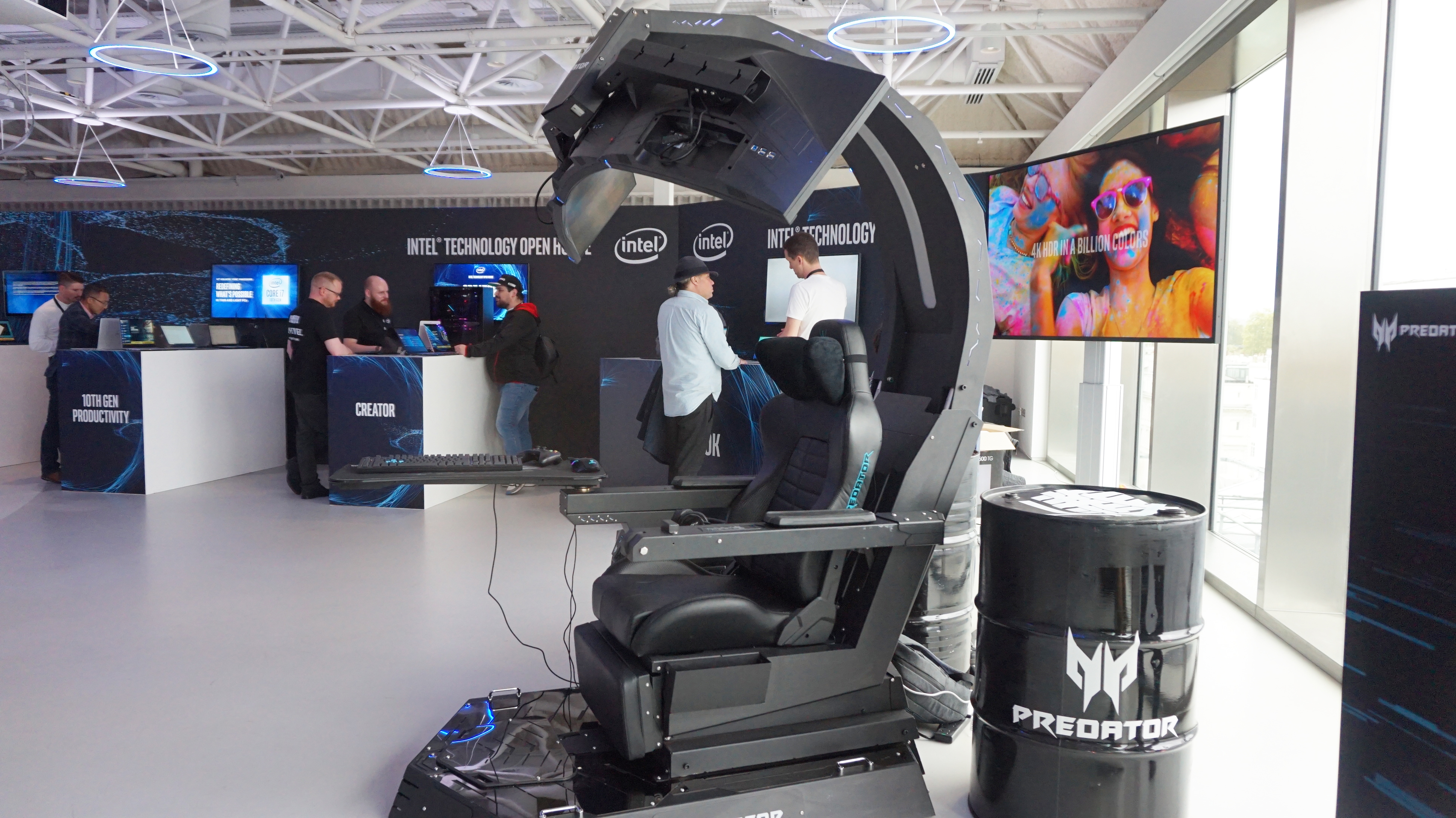 Dare you sit upon… Thronos?

And yet, it has sold. The Acer handlers, eyeing it warily with tasers and nets close to hand, insisted they had sold “some” Thronoses (Thronosi?) already. Admittedly, mostly to ludicrously wealthy people who shop in places such as Harrods in London, where there’s one permanently set up as an in-store demo unit. Even so, this came as something of a surprise to me. This is a device that looks like it should only exist in a theme park, at a public gaming show, or in an anxiety dream. It does not look like a thing that lives in your home.

It’s just so… industrial. Acer have always had a penchant for hard, sharp angles and go-faster gaming stripes, but the Thronos takes that design philosophy to a fetishistic extreme. Atop its glossy black pentagonal base sits the chair itself, encased by a pair of rigid black arm rests and backed by (here we go again) the Scorpion Arch, which grips its trio of monitors. There’s also a large LED strip that lines the inner curve of the ScArch, as well as glowing LED cutouts decorating the back and sides. Of course, all these lights can be colour-switched using a tiny remote control. 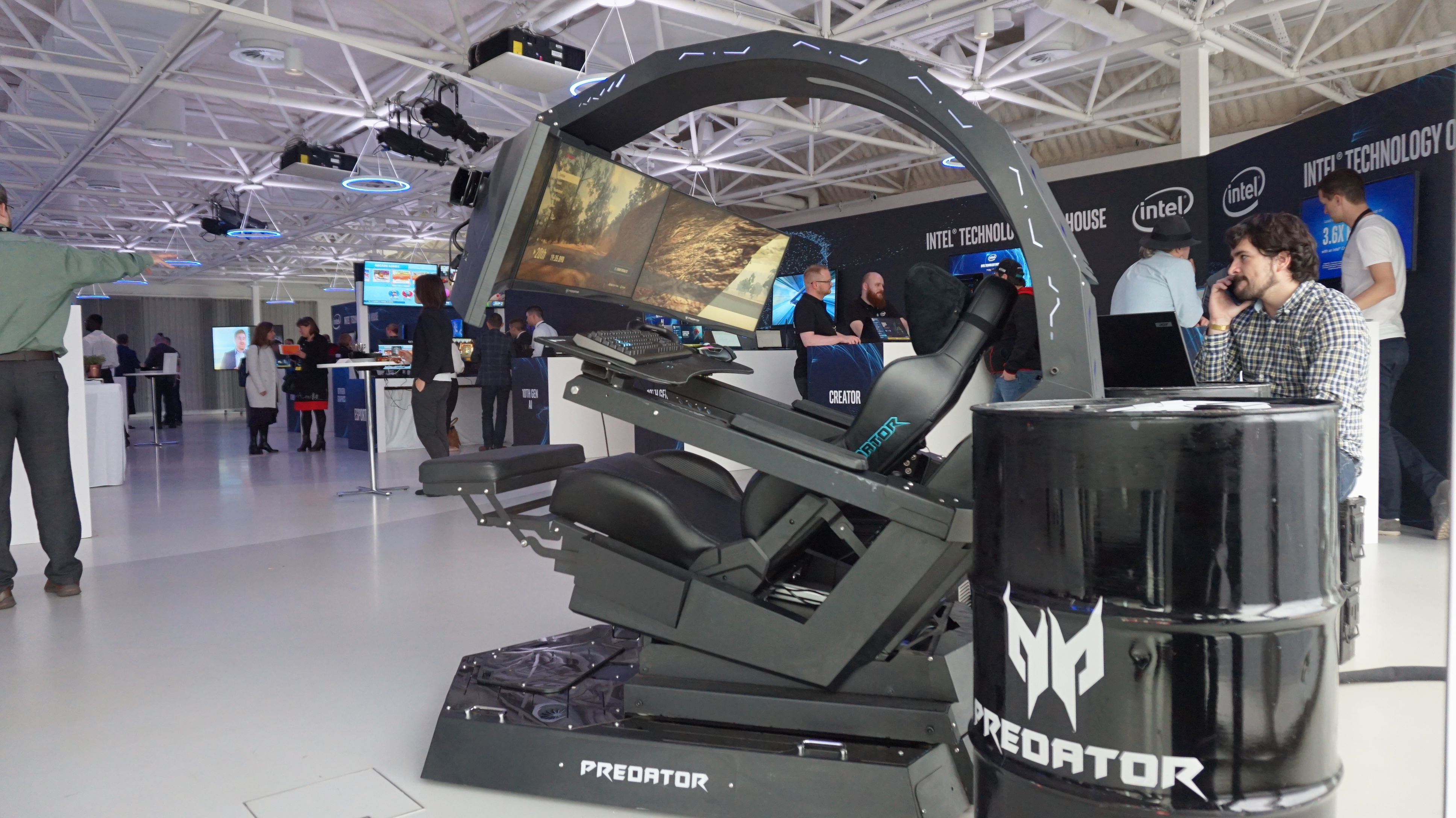 To its credit, I was impressed by how seamless, smooth and quiet the various machinations of the Thronos were. You see, it’s not just the Scarpian Orch that lifts up and down, or the mechanised keyboard tray that flips out from side to side. The whole thing can be reclined up to 140 degrees (as shown above), giving you what Acer calls “Zero-G” recline in order to, and I quote, “at long last fulfil the dream of becoming an astronaut and blasting off into space”. It’s even got a little foot rest that pops up to cradle your little leggies, too.

Even better, it’s all controlled via a set of buttons situated on the left armrest. There’s no slotting anything into place or leaning forward to pull bits up. Everything’s done from the comfort of your padded Thronos. Yes, I had to stretch a bit in order to reach the controls, but at least I couldn’t hit them accidentally with my elbow whenever I shifted about in the chair, giving the monster an excuse to fold up like a malignant Transformer and digest me. Even were I not consumed, I don’t think I could handle the shock of suddenly tilting back 140 degrees mid-game. 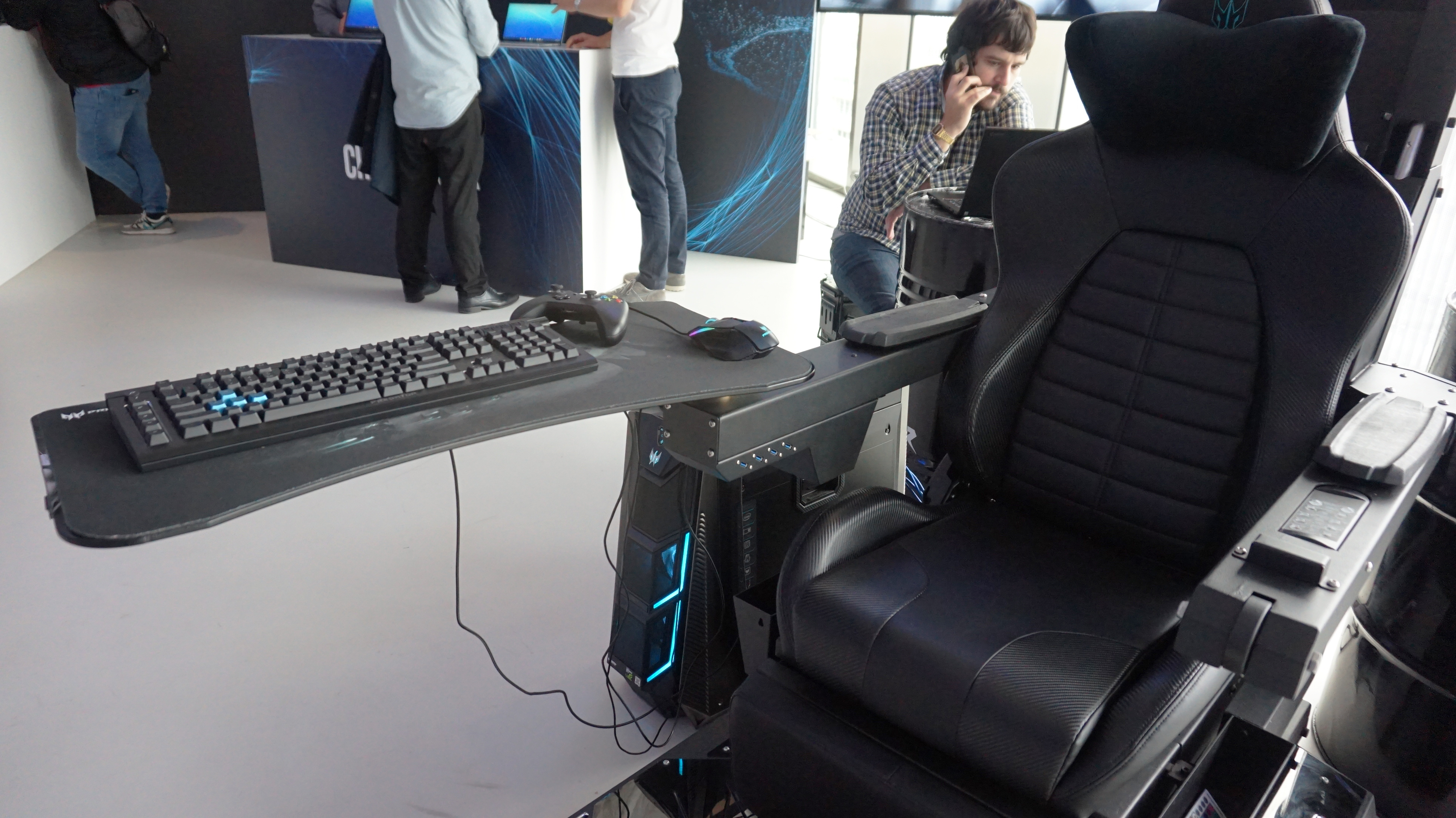 I’ll also admit that I enjoyed the novelty of having three 144Hz G-Sync monitors descend from the heavens to sit in front of my eyeballs. This is the bit that reminded me most of going to a theme park when I was little. I don’t have the stomach for them these days, but there’s still something innately exciting about the moment when a rollercoaster harness comes crunching down over your head so it can pin you to your seat. It’s a thrilling bit of mechanical theatre, a tight, knuckle-clenching promise of the stomach-flips to come, but the Thronos manages to capture all that without making me want to hurl my guts up afterwards.

I haven’t ever tested Acer’s Predator Z271U display, so I can’t say for certain how its overall image quality stacks up, but playing Dirt Rally 4 at a combined resolution of 7680×1440 was an even greater assault on the senses than Samsung’s crazy-wide 49in CHG90 display. Sure, I wasn’t really able to pay attention to what was going on at the very edges of the two outer screens, but with a pair of headphones on, I was completely and utterly immersed in what was going on. The three screens completely blocked out everything that was going on in front of me, and for a few brief moments I almost completely forgot that I was at the top of the London Science Museum, in a crowded room of tech heads at Intel’s Open House event. 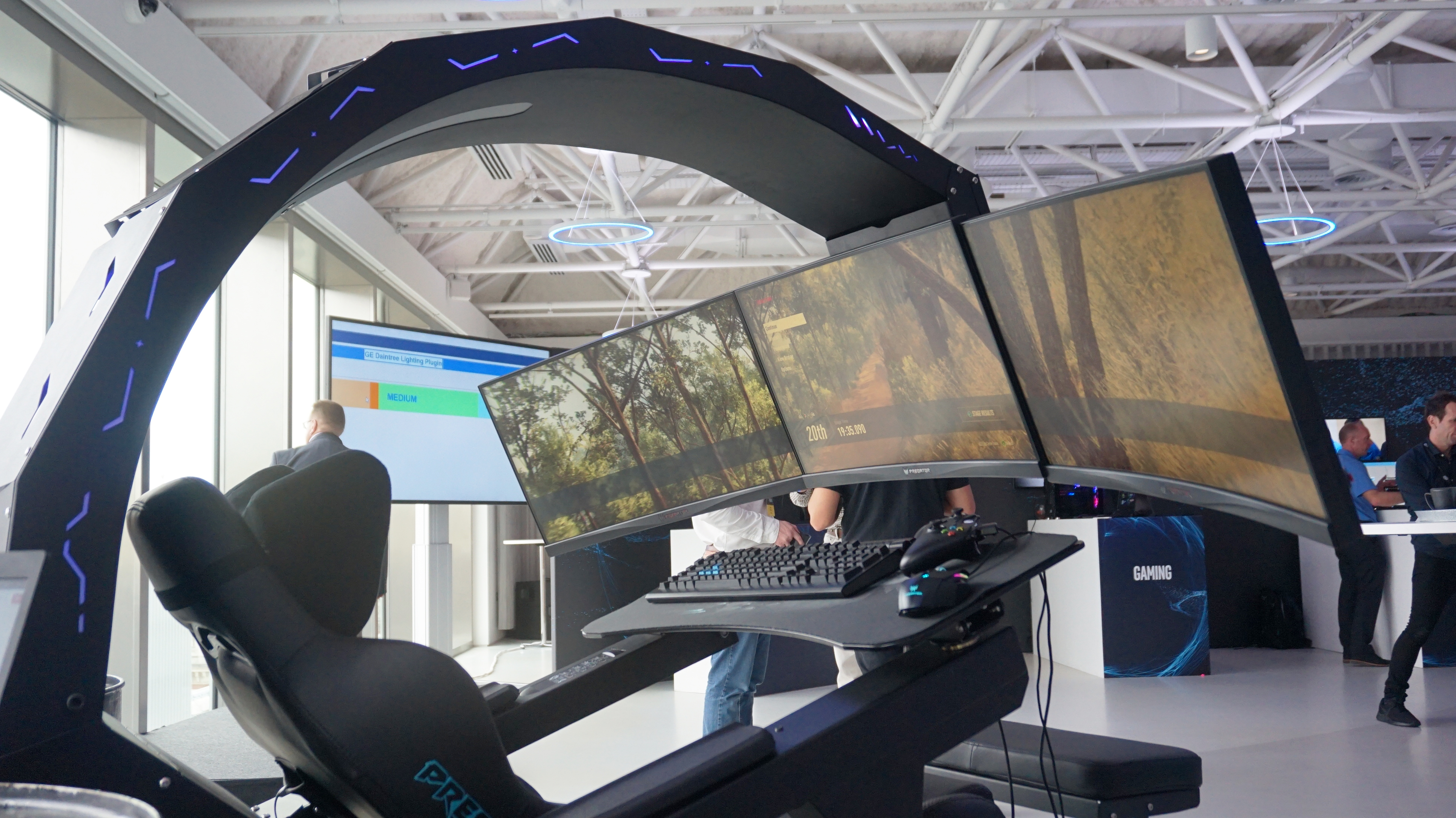 Instead, I felt like I was right there in the rally car, thanks in no small part to the haptic feedback rumbling through my spine down the back of the chair. It wasn’t quite as full-on as the Razer HyperSense setup I tried at CES, admittedly, but it works in a very similar way. Thanks to an audio splitter that plugs into Acer’s Galea 500 headset, the Thronos is able to translate a game’s bass track into chair-rippling vibrations, letting me feel the full brunt of my extremely bashed-up car engine.

I’m not sure it’s really suited to keyboard and mouse games, though. I was playing Dirt with a controller, for example, and I felt much more comfortable holding that down in my lap than I did reaching forward for the keyboard and mouse. Plus, once the keyboard tray is in its ‘shut’ position, there’s no way to move it any closer to you. This will probably be less of a problem for larger individuals who don’t have tiny girl arms, but as someone who likes to sit with their keyboard and mouse very close to the edge of the desk when I’m playing games, the Thronos felt a little bit rigid in this respect. 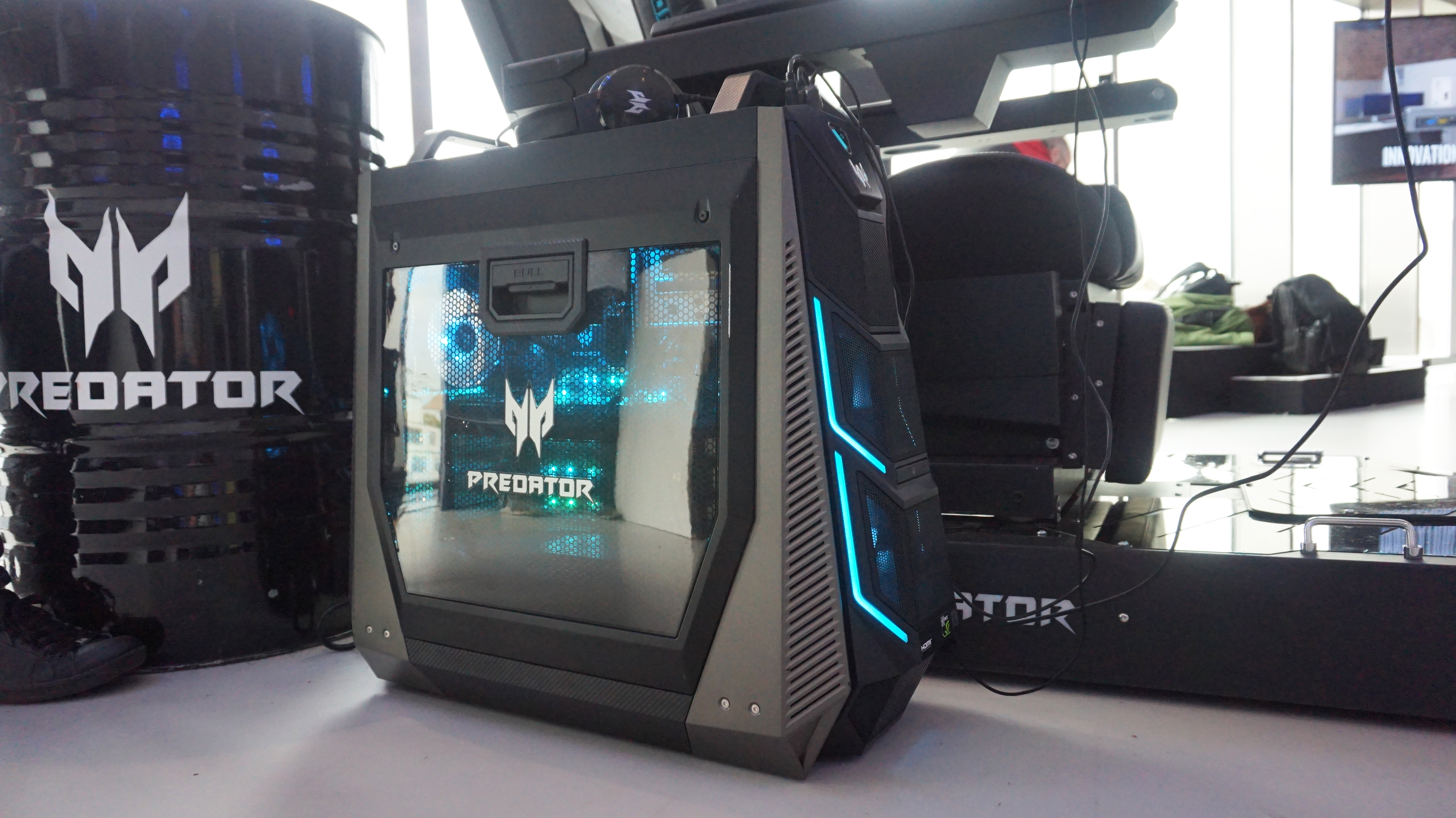 Not that any of this matters, really. Because this is clearly a robot demon in disguise, that’s almost certainly going to trap me within its black, LED encrusted claws and consume me like a meaty wotsit the moment I’m left alone with it. I’m onto you, Thronos. You might have impressed that handful of Harrods shoppers with your xenomorph looks and your flip-up foot rest, but when your own website describes you as having a “mechanised cocoon-like cabin” with a “vision-filling embrace” and whose “chilly RGB glow [lights] up the darkened shell of the machine”, your shifty humanity-enslaving ambitions are plain to see. In fact, I wouldn’t be surprised if the Thronos is the big bad that Acer’s Predator League of gamer superheroes [seriously, read it, it’s worse than you think – Ed] has been fighting against all along. Just imagine it, their own tech turned against them, in the biggest showdown history has ever seen. Now that’s a story to contemplate from the brutal comfort of a Thronos.