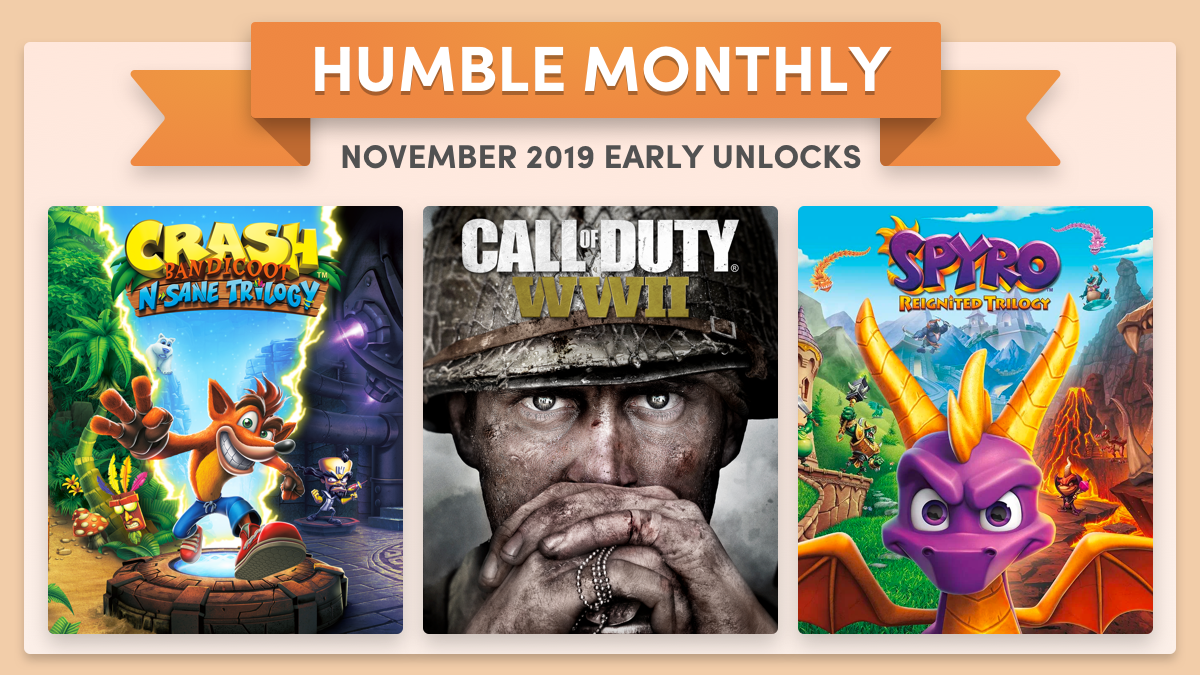 Just when you thought your trusted deals herald was done for the day, here she is with another one fresh off the deals presses. It’s arguably the best deal of the day, though, as Humble have just announced the early unlocks for their next Humble Monthly bundle: Call of Duty: WWII, the Crash Bandicoot N.Sane Trilogy and Spyro Reignited Trilogy. That’s seven games, all for just $12. You’ll need to be a Humble Monthly subscriber to get them, of course, but if you’re not you can join up right now for just $12 a month.

As per usual, this trio (or should that be septet?) of Activision games aren’t the only games Humble Monthly subbers will receive as part of next month’s bundle, but also as per usual, you won’t find out what the rest of November’s games are until the period for subscribing to that bundle comes to an end, which is the first Friday of next month – which in this case is November 1st at 10am PDT, or 6pm BST.

Judging by previous months’ additions, though, you can pretty much guarantee you’ll get a fairly decent crop of games for your $12. September’s bundle, for example, consisted of Slay the Spire, Guacamelee 2, Mothergunship, State of Mind, God’s Trigger, Squad and a new Humble Original, Shady Knight. Before that, it was Kingdom Come Deliverance, Surviving Mars, Yoku’s Island Express, Rising Storm 2: Vietnam, The Adventure Pals, Almost There, Swords and Soldiers II: Shawarmageddon and Humble original Don’t Give Up. That’s not bad for $12, especially when if you’d bought all those games separately, it would have cost a lot more than $12.

You don’t have to wait until all the games have been revealed to play the early unlock titles, either. Subscribe now and you can start playing all three games straight away. Plus, 5% of your subscription cost will go to a different charity each month for that extra warm fuzzy feeling.

Humble Monthly subscribers also get access to the Humble Trove, which consists of over 60 DRM-free games that are yours to play for free as long as you’ve got an active subscription, and you also get an extra 20% discount when you buy games through the Humble Store. You can cancel anytime, too, so you could theoretically subscribe to just get CoD, Crash and Spyro and then cancel it straight away if you prefer.

Update 1.18 for DayZ is a little bit explosive
Construction Simulator opens its biggest construction site this September
Diablo Immortal’s Chinese Launch Postponed Under Suspicious Circumstances
The Walking Dead (Telltale) – Did You Know Gaming? Feat. Remix of WeeklyTubeShow
PS Plus Premium and Extra: Here’s the Full List of Games for Europe