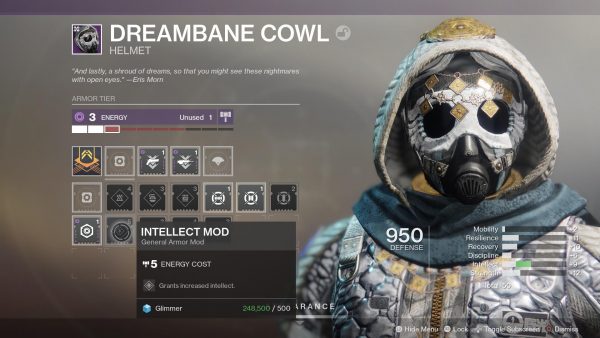 The armor system in Destiny 2: Shadowkeep has had a major overhaul in the new expansion and you’ll be able to find and equip more mods than ever before.

Once you’ve unlocked a mod, it’s yours to keep and reuse as many times as you want on as many builds as you like – although you’ll have to balance your Energy consumption.

Alongside new locations and activities, there are loads of new armor mods to get your gauntleted mitts on. You’ll now be able to add three mods to each piece of armor, and the addition of universal ornaments means that you’ll be able to customise your armor more than ever before.

In Destiny 2: Shadowkeep, you will get three extra stats with each piece of Shadowkeep armor: Discipline, Intellect and Strength. Veterans of the franchise will remember these stats from the original Destiny, and they affect your grenade recharge, super recharge and melee recharge rates respectively. Each stat will range from zero to 100, giving you even more scope to customise your loadout.

It would be prudent to note that armor mod slots and extra stats will only feature on armor earned in Shadowkeep – any old gear you have won’t auto-update. Bummer – especially if you have favorite aesthetic pieces.

You’ll still be able to infuse your favourite rolls into higher Power gear in Shadowkeep, though.

Where to buy new mods and how to get Enhanced mods

You can buy mods from Banshee in the Tower, as well as acquire them from Gunsmith packages, Engrams and from activities like Iron Banner, Strikes and dungeons. Enhanced mods – the most powerful variants – will only drop from Pinnacle end-game activities, so keep your eye out for Pinnacle weapon quests.

A major difference between the old armor system and Armor 2.0 is that mods are no longer consumed when applied. After you unlock a mod, you can apply it to one piece then remove it and reapply elsewhere as many times as you want.

It’ll cost around 500 Glimmer each time, which isn’t much of an expense. Old mods will carry over to Shadowkeep but you won’t be able to use them on new armor, so it’s best to go on the hunt for some more.

To make the most out of the new armor mod system, you’ll need to get the best armor in Shadowkeep. And to do that you’ll need to complete the new Nightmare Hunts activity and craft at the Lectern of Enchantment.

What is each mod slot for?

Each piece of armor has an initial energy pool of five and applying mods will use up that energy. There are three mod slots: one general slot for stat-boosting mods and two slots for weapon or ability mods. 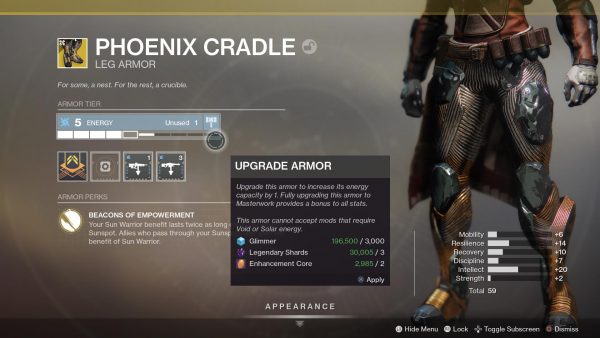 Which mods are compatible with what armor piece?

While there are more mods to come over the next few months, there are certain mods you can only use with specific armor pieces. These are:

Which Elemental energy types are compatible with what weapons?

There are also different elemental energy mods to consider with Armor 2.0, which can limit certain loadouts. The different synergies will depend on which weapons suit your playstyle, and what types of weaponry are powerful in the meta at the time.