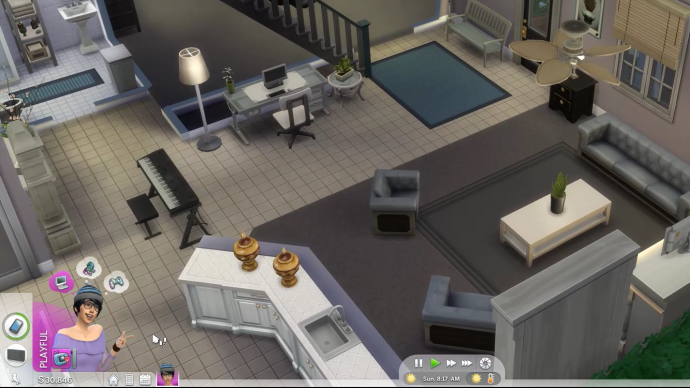 While playing through this second instalment of Simento Mori, an exploration into the limits and meaning of death in The Sims, I nearly swallowed a fly. I had casually taken a sip of my drink, only to feel the sensation of some foreign object (decidedly solid) making contact with the inside of my teeth. I had to extract its carcass from my mouth with my thumb and forefinger. I’m not sure I will ever be able to drink rosé again. This comical brush with death, drowning in pink wine — arguably, the most middle-class beverage to drown in — perfectly exemplifies how ludicrous the whole thing is. Welcome to Simento Mori.

Simento Mori is my experiment to let a neighbourhood waste away into nothingness. Here, we continue into part two. For those who want a refresher, check out part one here. Oh, and there’s spontaneous combustion in this one.

As a reminder, here are

In my first instalment, I had an inkling which was only confirmed in the hours which comprised my second instalment: Not a single Sim knows how to take care of a dog on their own.

In fact, no Sim cares to go to work, go to school, or do homework of their own accord. I am, frankly, inspired by this level of responsibility-avoidance, and I wonder why these obligations of work, school, and (optionally) pets are even in the game in the first place. Perhaps they are only there to entertain players; an added obstacle to spice things up a bit. The only thing Sims seem to want to do on their own is grill burgers, troll teh forums, and get older without incident. When I check in on my rounds, Sims are always running late to school or work, helpless without my helpful nudging. It’s certainly one way to live a life.

While it’s frustrating to check in on Sims who are working so tirelessly against their own self-betterment (you have to go to school, Annabella!), it is a joy to return to a family after all kids have auto-aged. Recall that this challenge requires auto-aging to be turned on, and so I am always surprised to find teenagers where there once had been children. I have to say, some of them turned out into pretty cool teens who would have definitely made fun of me in high school:

There’s a kind of joy in seeing children grow up, even virtual ones: the choices they’ve made, the fashions they grew into, and enviable (or regrettable) hairstyles. There are further curious pleasures, such as the discovery that after forty hours of this experiment, one of my houses didn’t have stairs. And I wish I could say that this whole jaunt into the limits of the Sims was simply a cavalcade of delightful, and ultimately benign, discoveries. But then a Sim spontaneously combusted.

Yes, you read that right. I went to check on two Sims (Jaimie Benoit and her husband, Alfonos Wilcox) who were hanging around outside in the cold. Like a good Creator, I encouraged them to go inside and warm themselves by the fire. This act of generosity would be my undoing. 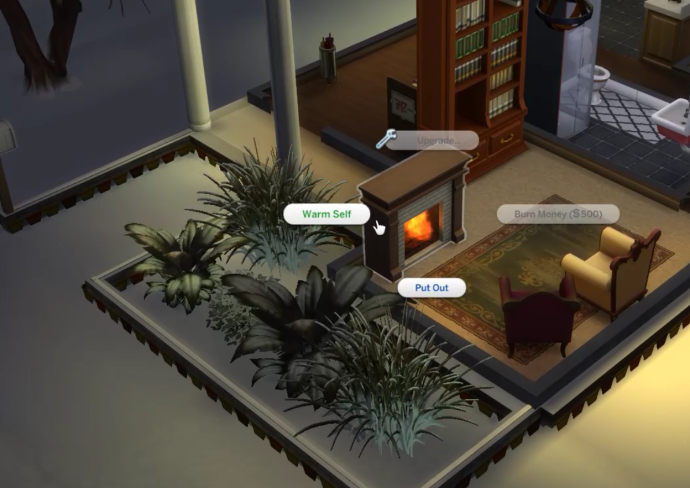 This was a mistake.

Almost as soon as Jaime sat down to enjoy the cosy glow of a fire after a long day in the cold, she was on fire. I’ve watched the footage over and over again, and there was nothing I could have done. She simply, and immediately, burnt to a crisp. 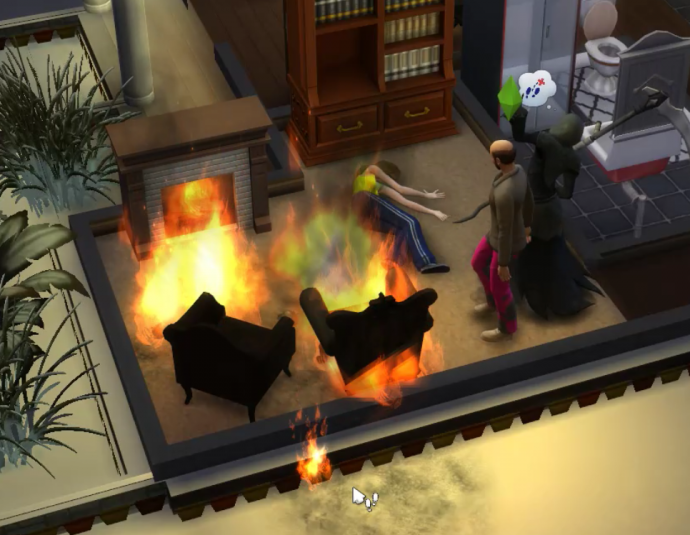 It was a whole thing. 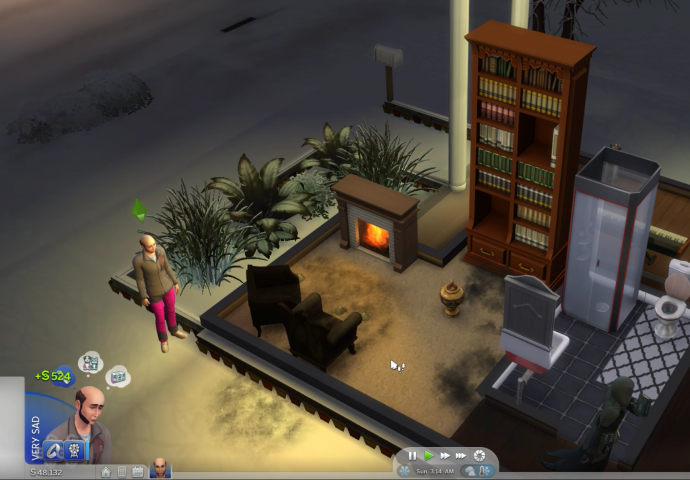 Jaimie certainly wasn’t the only death this time around, but she was the most dramatic. In some instances, I was there to witness a Sim’s death (as the case with Jaimie). Most of the time, however, I only realised that a Sim had died when I hovered the mouse over their residence. Alfonso Wilcox, in a bittersweet turn, joined his wife in the great Maxis Studio in the sky without my being there. I can only hope he did not spontaneously combust as well.

This whole foray is predicated on death — every action almost futile in its anticipation for the morbid crescendo. And yet, even though I have spent so much of my time waiting around for Sims to die, mostly the aftermath is the only bit I manage to catch. I turned on Death Notifications via a mod I specifically installed to try and catch the deaths as they happened, like some Sim ambulance chaser, but death remained elusive. Time carried on, and I was there to pick up the pieces. An entire generation of adults and elders passed away, Midsommar-style, without so much as a peep. But I was there. 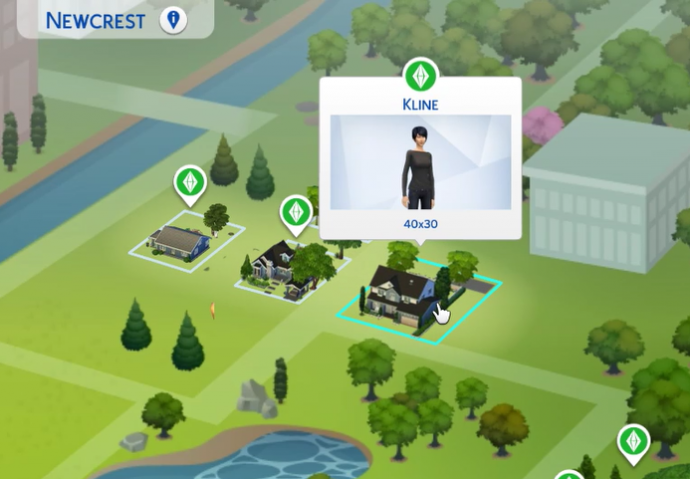 Annabella Light, for instance, was suddenly without her parents. I discovered her, alone, in a gigantic McMansion dressed in none of her pre-set outfits watching television. Her “Playful” mood, coupled with her parents’ urns sitting forgotten on the kitchen counter, disturbed me. The piano, left over from her parents’ joint-birthday party remained in the living room, untouched. What had happened here?

But when the going got bleak, I reminded myself of Winterfest at the Hsus’. The Hsus, a truly inspirational and stylish family of four, celebrated Winterfest in the most wholesome way possible: gathered around the dining room table, singing the Sims rendition of Auld Lang Syne (Froodage Lang Syne) in fragile unison. 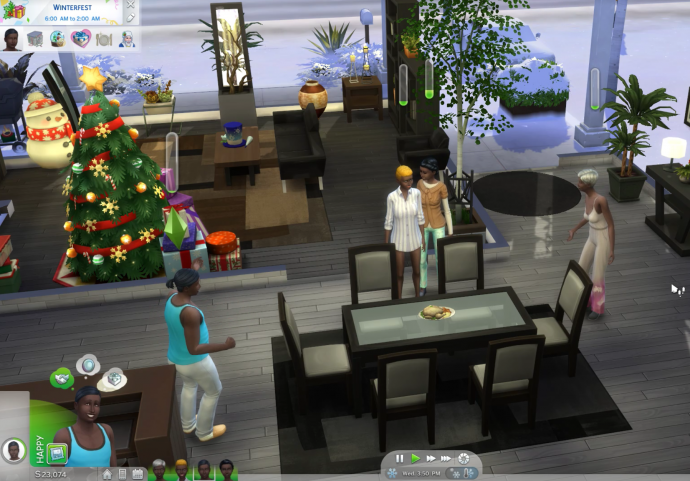 No one was a particularly good singer, but it didn’t matter. A Winterfest calm descended over Newcrest as the Hsu’s sang; for a few minutes, it seemed like the inevitability of death had been paused in the company of family, a roast turkey, and snowfall. Perhaps it’s silly to say that I got emotional while these rudimentary AI-puppets sang Auld Lang Syne in a made-up language before they eventually died, like some sort of danse macabre, but I couldn’t help being a little moved.

Maybe, despite everything, it really is the friends we make along the way.