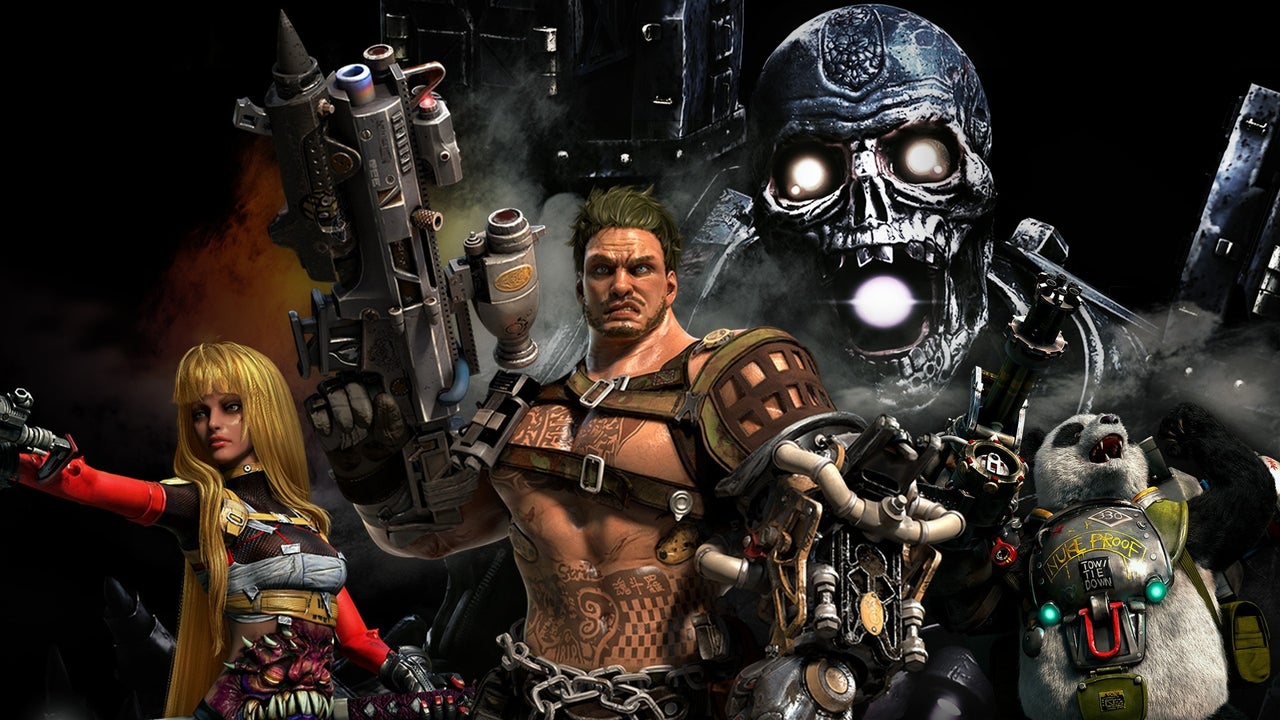 made me sad. It is absolutely not what I, as a lifelong fan of the series, expect out of a new Contra game in 2019. For one thing, it’s not good. For another, it feels like outside of tough difficulty and over-the-top co-op action, Konami has lost sight of what made the series popular in the first place. Calling this poorly made twin-stick shooter a Contra game not only fosters misplaced expectations, but also sours the legacy of the once-great franchise even further. Also, what’s with the random panda?In Contra: Rogue Corps you’re thrust into the center of a massive alien invasion, as per usual. The campaign takes place in The Damned City, which is ground zero in the war, supposedly shortly after the events of Contra III: The Alien Wars. The story is far from memorable, unsurprisingly, and barely gives any context for all of the generic alien slaughter. Plus, the sophomoric humor is extremely off-brand. Contra has never taken itself too seriously, but this cheesy banter is painfully stilted and forced.

You’ll begin as Kaiser, a generic machine-gun toting cyborg dude-bro who looks like a deranged knock-off of Duke Nukem, but you can then play as either him or the other three characters: Ms. Harakiri, a woman with an alien infused into her stomach; Hungry Beast, a cyborg Panda with a bit of a temper that looks and feels totally out of place; and The Gentleman, a sophisticated alien who has taken up arms for your side. All four of the characters do play a little differently and have different special powers, such as super-charged orb bullets or moving faster while shooting, but their nuances aren’t enough to really make an impact or inspire cool combos.

Hungry Beast is a cyborg Panda who looks and feels totally out of place.

Rogue Corps is split into three different ways of playing: the main campaign and one-off exploration missions, which you can play solo or via online co-op, a separate couch co-op mode which is basically just the exploration missions with a new camera angle, and a forgettable PvP mode with two teams of up to four each. Playing co-op certainly helps alleviate some of the monotony, as is the case in nearly any game, but it doesn’t fix any of the actual problems.

To be fair, on paper, Rogue Corps wasn’t a terrible idea. Flipping the formula on its head to deliver a twin-stick-style shooter in fully 3D environments is certainly an ambitious approach, and it absolutely could have worked like it did for Neo Contra back on the PS2. The fact that Rogue Corps is different from most other past Contras isn’t really the issue – it has lots of others.

The series has always thrown a wide variety of perspectives and gameplay styles at us, even dating all the way back to the original Contra with its mixture of side-scrolling, behind-the-back third-person shooting, and even top-down elements. But even then those varying styles felt cohesive. This time, almost nothing feels like it comes together coherently.

For example, visually, Rogue Corps absolutely does not look like a game from a major publisher released in 2019, or even a high-quality indie game. Textures are poor and repeated ad nauseum across the entire 20-plus-hour campaign. It doesn’t really play well, either: you get bland, boring mission objectives such as “reach the end of the level” or “destroy enemy spawn points,” and they’re copy-pasted over and over. The icing on the cake is that the movement and shooting just feels sluggish and clunky. Moving through levels is a slog and replaying them to chase better scores is a chore.

Rogue Corps absolutely does not feel like a Contra game.

And on top of it all, Rogue Corps absolutely does not feel like a Contra game. While the classic Contras built a reputation for being hectic and challenging, it was also precise and calculated. Rogue Corps, by contrast, feels more like chaos for the sake of chaos. Many enemies will just bum-rush you and force you to kite entire swarms while running backwards and shooting. You’ll use that same strategy again and again. Twin-stick shooters have their own brand of exciting horde management that works when done well, but it doesn’t fit here. And even though Contra’s iconic spin jump move is still technically here, it’s far less useful when the vast majority of levels are flat and confined. I relied mostly on my dash maneuver that acts like a combo of a dodge and knockback strike.

Plus, Rogue Corps is a Contra game that forces you to spend a significant amount of time not shooting your guns because of the aggressive cooldown meter. There’s no ammo, but instead every gun overheats after a brief, upgradable period. While it’s consistent as a design choice, it severely restricts the fun and feels very anti-Contra.

Adding insult to injury: every mission is timed and cannot be paused, even when you’re playing solo. So if you need to set the controller down to go do something you’re guaranteed to lose time and likely to get killed. If you lose all your lives or run out of time you have to start the entire tedious mission over.

The one bright spot Rogue Corps has going for it, at least at first, is the progression system. Each weapon can be slotted with upgrades that affect all of its stats from damage, cooldown rate, and more. You can also upgrade each character with implants to adjust various offensive and defensive stats. You unlock new upgrades and loot during missions, which would lend it some replayability if levels weren’t such a chore to get through the first time.

Not even the inclusion of the Konami code can make Rogue Corps feel like a true Contra game.

Honestly, the state of Contra as a franchise is frustrating. As a longtime fan of the series, I’ve missed the challenging yet satisfying brand of bullet-hell-meets-sidescrolling run ‘n’ gun shooter that put Contra on the map in the first place. Hard Corps: Uprising, the most recent new game in the series from 2011, retained that formula and switched things up with a more colorful art style that definitely worked. But after this long of a hiatus and seeing where Konami took the brand next has me feeling more hopeless than before. On the bright side, there are still excellent indie games like Blazing Chrome coming out to satiate the appetite partially.